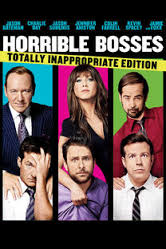 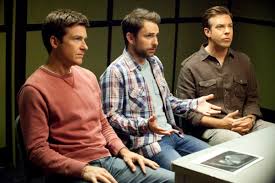 A very funny movie about three idiots in tough situations with their unpleasant bosses.

Horrible Bosses is an entertaining and humorous movie. The plot is the most standard thing about the film, with three regular guy friends getting mistreated by their bosses and deciding on a plan to have each of these bosses killed. Yes, this has been done before in other movies, and Horrible Bosses is smart enough to mention those movies as a point of reference for these guys and how they should go about it. Despite it’s routine storyline, this movie does work. Credit that to the actors who are really finding the right tone. Colin Farell as one of the bosses is hilarious. Jennifer Aniston, doing a sexy thing that we’ve never seen her do before, is also pretty great. And on the protagonist side, Jason Bateman plays the straight man nicely and Charlie Day is the craziest of the friends. The story also does have some things going for it, such as the “Wet Work” scene or the way the movie takes its time with having the guys arrive at the conclusion to kill their bosses. This is funny stuff. It’s not especially smart, and is more like a B movie of comedy kind of thing, but it is certainly a good time.

Horrible Bosses is a smart and funny movie. But it’s not funny for the reasons one might think. It’s not funny because of its plot, or even it’s bosses, but because of it’s three leads. These guys are natural talents. Especially Jason Bateman and Charlie Day, with that high voice that he shouts with when angry. Bateman is great at playing the straight man to a bunch of idiots, just like he did so well on the television show Arrested Development. Here he gets to do it to his idiot buddies, Charlie Day and Jason Sudekis.

The premise is pretty simple and straight-forward. Three friends all hate their bosses. They all work in different industries, and have completely different situations, but at the end of the day, the boss hatred is the same. I like how the movie does try to make things different for the characters in whatever ways it can. For example, Charlie Day’s character, Dale, has a boss who likes him and tries to be sexual with him all the time. I could understand this being a problem if she was fat or nasty, but she’s Jennifer Aniston and smoking hot. She’s probably hotter in this movie than she ever has been before, but it’s a problem for Dale because he is engaged to another woman and wants nothing to do with his boss, sexually.

Another difference is in the Jason Sudekis story. He plays Kurt, a nice guy who actually loves his boss, (Donald Sutherland.) He’s the only one of the three friends who truly enjoys his job and the people he works with. All except for Sutherland’s cocaine sniffing son, played by Colin Farrell. Other than the boss’ son, things are great. That’s when Sutherland passes away and Farrell takes over, making the workplace into his personal sex dungeon, having girls into his office to do whatever he wants with them. He even walks around the office with an open shirt and his belly hanging out.

Farrell and Aniston are fun to watch in these roles. They are both entertaining and strange. The third boss, played by Kevin Spacey, isn’t nearly as creative. Unfortunately, he’s kind of the star, of the bosses. He’s the guy who becomes the big bad of the movie, and he’s got by far the most screen time, bringing us into his house and spending a couple of scenes with his wife (Modern Family’s Julie Bowen.) Spacey is mean and unpleasant and not really funny about it at all. Still, two out of three isn’t bad. And spacey is the one that we hate the most, so it’s okay that he’s not funny. The other two bosses are there for that.

The premise is really just about these three guys slowly getting to a point where they hate their bosses so much that they decide to have them all killed. They see a friend at the bar who used to work for Lehman Brothers and is now offering to give hand-jobs for money, and they realize that quitting and looking for work somewhere else is just not an option. I like how the movie took the time to consider that.

And so they decide they will hire someone to take their bosses out, hoping to get some sort of a discount since they have three jobs for this person to do all at once. Something like, buy two, get one free. This brings them to how to find someone to do this, and a situation involving “wet work,” that turns out to be very funny and unexpected. Again, the movie is taking it’s time, not rushing into the idea of having the boys do the murder themselves. The more funny scenes that can be thrown in there, before getting to the central plot, the better.

The boys also meet a murder consultant at a bar, played by Jamie Fox, who won’t do the job for them, but will at least offer up advice for a certain asking price. Fox’s character, named Motherf*#er Jones, might only have about three scenes, but he’s one of the most consistently funny characters in the movie. Whether he’s talking about the movie Snow Falling On Cedars, negotiating a price so that he ends up getting less money, or telling a very witty story about how he got his name, this guy helps deliver some extra energy into a movie that was already running strong. And watching the guys interact with him is a lot of fun too.

The movie takes a strange turn in it’s third act, when the boys actually go out to do the deed. It suddenly becomes darker and more unrealistic, but what other options did it have? Let’s just say, these guys are not murderers. Yes, they’re frustrated with their bosses, but the movie can’t just suddenly have them become killers. And so it finds another situation, which might be a little too coincidental, but at least it helps keep the ball rolling. All things considered, the way direction the movie ends up going in might be a change from the earlier portions, and not as strong, but it still plays out just fine.

Horrible Bosses works because there are so many characters in it, and each one adds a little bit more to the humor level. Jason Sudekis isn’t anything great, but like the bosses, to have two out of the three main leads work is pretty good. And the dialogue is often well-written too, with the characters mentioning and making references to movies, like Jodie Foster’s the accused, Snow Falling on Cedars, Hitchcock’s Strangers on a Train, and Danny Devito’s Throw Mamma From a Train. This movie, like the film’s of Judd Apatow, knows how to throw a random movie reference into the middle of a conversation and make it work, simply because of how out-of-nowhere it is.

Horrible Bosses is a guilty pleasure kind of movie. There’s nothing genius going on here, but the little details happen to be very funny. The first two thirds of the movie are by far the best, and similarly two out of the three leads are funny and two out of the three bosses are funny. I would have liked more of Colin Farrell’s character, but maybe the reason why he is so funny is because his screen time is lso imited. The same goes for the Jamie Foxx character. There’s a lot going on here, and having so many characters and so many story lines really helps keep the movie interesting. It’s not perfect, but it is certainly an enjoyable film, and the kind that gets funnier and funnier the more you see it.