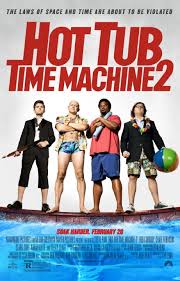 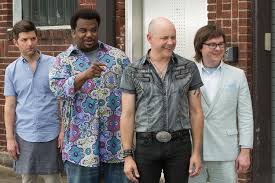 Not even in the same ballpark as the first movie, this one is set entirely in the future, misses the point of the original, and is completely unfunny.

This is a really bad movie in all kinds of ways. The most offensive of all as how little it seems to hold the original film in regard. That means this movie goes the opposite way as the first movie every chance it can get, and the result is a disaster. That first movie worked really nicely. It combined all kinds of genres and even put itself right smack in the middle of the eighties. This second movie refuses to pick a generation, other than to say it throws our guys into the future. John Cusack is sorely missed here, and the jokes really don’t work. The storyline, involving a character who gets shot and how the boys need to jump in the time machine to go to another time and figure out how it all went down, is pretty good. just one problem. They go to the future instead of the past. What follows is a series of unfunny jokes and lousy ideas. This movie is so much worse than it should have been.

Hot Tub Time Machine 2 is a sequel that falls very far away from the original. The first movie worked on multiple levels, combining all different genres and staples of eighties films. The sequel doesn’t use a single one of them. That first movie combined 80s time travel (Back to the Future), with a guys getting out of town for the weekend movie (The Hangover), with a staying at a single hotel or lodge movie (Clue, Barton Fink). It even had the 80s references to the Russian scares and movies like Red Dawn. The sequel has absolutely none of it.

That’s because the second movie wants to completely be its own thing. Now, unless it has some incredible, fresh idea or a way to actually make the formula of the first one better (think Terminator 2 or Aliens), changing the structure and intent of that first movie up too much is not a good thing. Look at Horrible Bosses 2, which fell into the exact same trap as this movie. The first film hit a special niche, that was really lightning in a bottle, and the sequel decided not to copy it at all. As a result, we just got a really bad movie. I would take something like the Hangover 2 any day over something like this. With the Hangover 2, they really were repeating the same jokes, just in different ways, but that was okay, because we got to see these characters who we loved doing the kinds of things that we wanted to see them do.

It’s amazing how different Hot Tub Time Machine 2 is from the first film. It doesn’t even go into a specific time period, whereas the first one completely captured the eighties, starting with eighties teen icon John Cusack, himself. The sequel propels our characters into the future. In fact, it starts in the future where Lou is a multi-millionaire who invented Google (now called Lougle), and Nick has invented all of these songs that would later be made popular by other artists. So he is claiming to be the inventor, (for example), of  the Nirvana album, Smells Like Teen Spirit. All of this is how the first movie ended, and I give the movie credit for continuing off of that, instead of trying to back-pedal and say that ending didn’t really happen. It’s not easy to expand on something like that, and maybe this movie would have been better off if it hadn’t, but it deserves credit for the effort.

The problems lie in the direction that the movie goes. For starters, John Cusack is not back. Now he was the heart and soul of that first movie. He wasn’t just one of the friends, he was the star. It’s ridiculous that they made this movie without him, and just by him not being back alone, this movie automatically has a very different tone. Cusack was the straight man, and without him it’s up to other characters who weren’t that way in the first movie to now have to mold themselves to fit that kind of role.

The movie has Lou (Rob Corrdry) still playing Jacob’s (Clarke Duke) father, which is a discovery that came at the end of the first film. The problem is, he wasn’t Jacob’s father for the entire movie, until the very end, and so now seeing him this way, gives them a very different kind of relationship. Luckily the movie doesn’t strive for that difference and keeps Lou as pretty much the same jackass he was in the first film. He’s the wild card. The guy who is more than a little nutty and just wants to see the craziest things possible no matter what the consequences. When someone takes a shotgun to his testacles while at a party, it’s a sure thing that he’s about to die as a result. That’s when the boys get in a time machine and travel to the future.

Why the future? Was it a mistake? It certainly was on the part of the writers. Just by going into the future this movie severs nearly every tie it had to the original film. It should have gone into the nineties, when the characters were just trying to find their careers or something. Instead, we get a movie loaded up with idiotic technology and a society that strives on harmful reality shows such as watching buildings fall on babies, or cars that are sadistic and can decide to kill you if they so choose.

Now the characters are in this random time in the future where Jacob is the new local celebrity, and not Lou. They quickly seek out Adam’s (John Cusack’s) son, also named Adam (played by Adam Scott.) Of course Cusack never appears in the film. I’m glad that Scott wasn’t playing another version of Adam, which is what I was afraid of when I originally saw that Cusack wasn’t coming back and that Adam Scott had been tapped to be the fourth lead in the movie, in his place. And it’s kind of clever that this is Adam’s son, but it also feels unbelievable that Adam would be nowhere to be found. I’m a little disappointed that Cusack didn’t even make a cameo in this movie. Even just to get his voice on the phone, with him calling his son or something, would have been nice.

So here the characters are in the future with a goal of trying to figure out who shot Lou, back during his party in the past. Now how the hell can they do this from the future? If they had gone back to the past, they could have relived the party or something, and kept their eyes out for suspicious suspects (like Jake Gylenhal did in Source Code), but in the future, whoever did it is long done. Still, the guys make their suspions, which are mainly all centered on Brad (Kumail from the HBO show Silicon Valley.) Brad worked for Lou and hated it, and now in the future, Brad is a millionaire. So the guys decide he must have done it.

Other than that little bit of trying to solve the mystery and getting exactly one suspect, this movie mostly spends its time by having the characters roam about the future and try different things out. Adam tries a drug known as the electric ladybug, which sticks to his neck for twenty four hourse. They all go to a gameshow where the audience shouts out terrible things to do to a celebrity and three of our leads end up in a situation having sex with each other. It doesn’t quite work out like that, but pretty close. None of this stuff is funny. The first movie had plenty of gross out gags, but they mostly worked. Here, they are thrown in there with little thought given to timing and punchlines.

There isn’t much positive to say about this movie, but I do like that there’s a mystery for a plotline, regarding the guys figuring out who shot Lou. I also like the way the movie used Adam Scott. Other than that, this one is a dud. When the humor is pretty much non-existent in a movie that is a sequel to such a funny original film, you know there’s a problem. In that first movie, there were so many killer jokes that there were even ongoing jokes, like the bellboy and how he would lose his arm. This sequel has none of that. If its version of working that plotline is us finding out how Lou got shot, then it missed the point of what that first movie did with the Bellboy’s arm, giving us close calls again and again, with the boys thinking each time that this one was it. Hot Tub Time Machine 2 is a mess. It’s a real shame, because the first movie still holds up as a modern comedic gem.