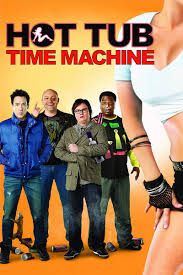 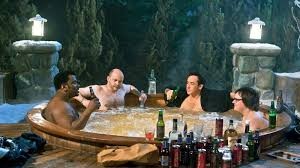 It’s Back To The Future meets The Hangover as a bunch of slacker friends find themselves traveling back in time to the eighties, getting stuck at a skiing lodge, and trying to make sense of the world around them.

Hot Tub Time Machine is a very funny movie. It’s not the smartest film in the world, but it has jokes that mostly work and a premise that puts the perfect formulas into place. The writers of this movie knew that with a combination of these ideas, the movie would have to turn out pretty good, and they were right.

the formulas that are mixed together here are actually three. first, there’s the time traveling. Back to the Eighties. And all of the rules that go with time traveling and not changing the past and stuff like that apply. They even talk about the movie “The Butterfly Effect” and “Timecop,” here and some of the ideas that were mentioned in those movies and might or might not be true.

The second formula is the slacker guys on vacation together situation. Basically, it’s the Hangover. Four guys going away, leaving their lives behind for a weekend. Wild Hogs is another example. it seems to be a fairly new formula, but I’m sure we’ll be seeing many more examples in the future.

And finally, there’s the being stuck in a small town formula. The movie that most people think of is Groundhog Day, but to me, that movie had it’s own thing going on. That character wasn’t stuck in a town, he was stuck in a single day. In Hot Tub Time Machine, the characters are really stuck at a ski lodge, which is kind of like one of those movies where they are stuck in a hotel (Barton Fink) or in a mansion (Clue) for the weekend.

All of this sounds like a lot. It sounds like it might be too many formulas trying to be mixed together. And that would be true, if the basic components weren’t all very simple. Instead of one person traveling back in time like Back to the Future, it’s four friends. And they stay in a hotel resort. That’s all. Which means they come across the same characters over and over again who are also staying at the lodge, such as a bellhop with one arm or an arrogant ski instructor or the sister of John Cusack’s character, Adam, who is the the mother of one of the younger friends, Jacob (Clark Duke).

The four friends are Adam and his two high school buddies Lou and Nick (Rob Corddry and Craig Robinson), and then Adam’s sister’s kid, Jacob, who is a teenager. The reason for this trip is because Lou (Corddry), the wild one, might have just tried to kill himself. And so the boys want to help him appreciate life again. They go back to Kodiak Valley, where they had some of their craziest times when they were younger, to try to regain some of that glory.

Once there, each of them gets into his own thing. Adam meets a new love interest, Nick reclaims his manhood, starting with taking up again with his old band (his cover of a Black Eyed Peas song is terrific), Lou finds himself hooking up with someone he never thought he would, and Jacob is the one trying to get this hot tub time portal thing fixed. He mostly deals with Chevy Chase (nice 80s throwback, with all of those “Vacation” movies), as the hot tub repair man.

Those four plot lines are all pretty thin, as is a fourth one that involves the boys taking on the ski partol bullies in a fight. but the movie finds ways to make these things work, such as injecting the ski partol guys with a sense of fear of the soviet terrorists, as inspired by such 80s classics as Red Dawn, which is a movie they hold in high regard. Another great 8os reference is the Cripin Glover bellhop. He’s the Back to the Future guy, Mr. George McFly himself, and here, he has a terrific little part.

Glover plays a guy who has only one arm when they encounter him in the future. But in the past, he’s got them both. So the boys keep wondering how he’s going to lose it, and the movie keeps throwing his arm in danger making both us and the guys think this is the moment. It’s really funny because the situations are so ridiculous, but what takes it to the next level and makes it hilarious is that the guys want him to lose the arm. they know it’s coming, and so they want this to be it. And every time it’s not, they’re disappointed. Especially Lou. The Glover character is used for lots of great jokes like this, or like the boys grabbing him, throwing him down, and quizzing him about the arm. There’s also another scene where Adam gets really drunk and crowds Glover and tells him he’s gonna lose his arm, with Glover thinking he’s just kidding.

The movie has a ton of jokes and that’s why a good amount of them work. It has more gross out jokes than any movie I really liked before and in that sense feels almost like a Kevin Smith movie. There are poop jokes, pee jokes, vommit jokes, and seamen jokes. And all of them are visual gross out moments. Normally, that stuff is amateurish and a major turn off, but here the movie finds a way to handle some of them just right. It’s not a great movie because it’s plot and characters are so two-dimensional, but it is certainly a lot of fun.