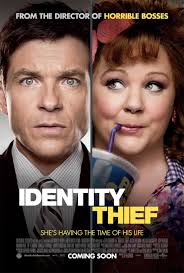 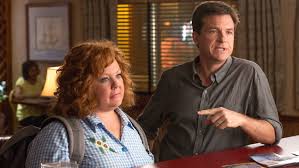 A Surprisingly much better movie than expected, this movie isn’t anything great, of course, but it is a good deal of fun thanks to it’s likeable actors.

There’s nothing great about identity thief, but it is definitely better than one would expect. that’s because even though this story is kind of routine, the actors on board here are both incredibly funny. and it’s natural humor too, where they know what kind of characters they play best, and are playing those roles here. jason bateman is the straight man, going down to florida to find the woman who stole his identity. melissa mccarthy is that crazy woman. the first half of the movie is much better than the second half. establishing the situation that the movie will be about is as much fun, if not more, than actually watching the situation. there are definitely some unneccessary and unfunny scenes as the movie goes on, but it’s still a pretty enjoyable little ride in a guilty pleasure kind of way.

Against all odds, identify thief is somehow a pretty decent movie. I say against all odds because there’s nothing about it that looks very funny. a movie about a woman who is a complete jerk and steals a man’s identity and then he has to go after her, just doesn’t sound all that great. the idea that the two of them have to go on a sort of cross-country road trip together only makes it worse. the whole thing looks like another version of that movie due date with robert downey jr. and zach galifanakus from about a year ago. both movies feature one straight man and one crazy character to make up the buddy team. I suppose it’s all just a take on planes, trains, and automobiles, only the acorn has fallen very far from the tree.

and yet, identify thief is actually kind of clever and fun. for one thing, while melissa mcarthy might look annoying from the trailers, she happens to be pretty entertaining here. and jason bateman as the straight man is just great. this movie was directed by the same man who directed horrible bosses about two years back, and that movie turned out to be kind of terrific. i suppose i’m being genergous with that word, but horrible bosses is the kind of movie you can watch again and again and enjoy even more each time. like identity thief, it didn’t seem like it would be anything special from the trailers, and yet somehow, each of the actors was able to bring his a game to the table and fit the characters perfectly.

identity thief isn’t nearly as good as that movie, but it’s still pretty decent. at the very start of the film we spend time with the jason bateman character, sandy patterson (it’s a running joke in this movie that sandy is a girl’s name, and despite the joke getting repeated a lot, it is always pretty funny). we watch patterson at work, keeping the books for his boss, (Bateman’s real life, long-time friend, john favreau), and being treated like garbage. we also watch as diana (melissa mcarthy), calls patterson up and tricks him into giving her all of his personal information.

from there we switch over to start watching diana as she goes out to a club one night and spends money like there’s no tomorrow. her goal is to meet a nice guy, and she is willing to spend tons of sandy’s money in order to do it. at one point, she buys a bunch of melon shots at a bar and then tells a guy that her friends didn’t show up and she needs help finishing the shots. at another point, she buys drinks for everyone and goes swinging around on the chandelier. the scene is pretty ridiculous, but it’s dopey fun. diana does get a reality check, though, when the bartender has to come over and explain to her that these people are not her friends and just like her because she bought them drinks.

the real fun of the movie starts when sandy begins finding out what happened to his bank records and credit cards. bateman is such a great straight man, that watching him in just about any scene dealing with ridiculous people is entertaining. when his credit card is declined at a gas station, for example, the attendant has to cut his card up, despite sandy doing everything but threaten the man not to do it.

i really liked the plotline about sandy joining a new startup company, run by john cho, and getting in on the ground level. the problem is that diana has been arrested and didn’t show up for her court date, and since she is using sandy’s i.d., the police now come after him. these police show up at sandy’s new job and take him away, and it is increibly detrimental to the company to have this whole scene play out in front of some of their clients.

all of this is what leads sandy to go down to florida in search of diana. if he waits around for the police to get to it, this could take months, and sandy doesn’t have that kind of time. his new company plans to fire him unless he can correct this problem and clear his name. so sandy sets out for florida and we get the start of his quest. the movie has him find diana a little too quickly when he gets down there, and that’s one area where this film could have definitely been improved. as the movie goes on, there will be plenty of lousy scenes that should have been cut, and in place of them, sandy could have had to do a little bit of detective work to track diana down. only he doesn’t. she’s right there when he arrives and he gets a hold of her pretty fast.

the first few scenes of sandy and diana together are all violent ones. they fight each other on the road and then again at her house, with objects being thrown at each other and things like that. then the two of them actually sit down together and start talking. the violence scenes were pretty funny (when do we get to see a guy throw things at a woman and have it come off as comedy?), but so are the scenes of them just talking to each other. diana is a crazy person and sandy keeps trying to talk sense into her.

the second half of the movie loses its way at times. there are some scenes that feel more deleted scenes than anything else. they feature recognizable stars and faces, but even still, they add nothing to the story and aren’t very funny either. one of these scenes takes place at a diner with ellie kemper (the office, bridesmaids). another one features eric stonestreet of modern family and involves lots of stupid parading around in underwear. the movie definitely steps off the track for these scenes, but luckily it kind of finds its way back for the ending.

identify thief is by no means great, but it’s an okay film. there are plenty of things to like about it, starting with it’s two stars who are both great in their roles. the story isn’t anything special, but it’s fine and keeps us watching. all of the bounty hunter stuff with robert patrick was pretty routine and cliched. still, once sandy arrives back home the movie does find some interesting twists to pull over our eyes. identity thief is better than expected, but that’s only because expectations for it were so low. it’s a decent movie with some laughs and some fun ideas.