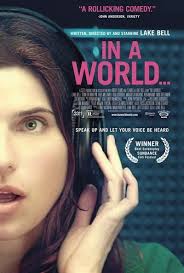 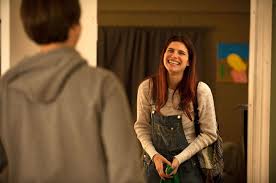 A movie that is both unique and creative, and also cute and charming without hitting any of the usual cliches, this one is a very enjoyable experience.

This is a movie that takes on the romantic comedy genre and finds ways to spin it on its head. That starts with making the romance only a subplot, and using an original story about the business of movie trailer voice-over business as the main story. There’s lots of comedy here as the premise is focussed on a three-way competition between Carol, her father, and the man who is the new hottest thing in the industry. Pretty much everything about this movie works, including a number of great subplots, such as what happens between Carol’s sister and her boyfriend. The romance between Carol and a coworker is light-hearted and charming in all the right ways. Best of all, this movie avoids the usual potholes of a romantic comedy and doesn’t even look twice at them. This is a very smart and enjoyable film.

In A World is an incredibly unique and interesting movie. It’s a film about the movie trailer voice over business. For decades there was one name in the industry that everyone knew, Don LaFontaine. He was the guy whose voice is in everybody’s head when they think of trailers and the words, “in a world where…” LaFontaine died in 2008 and this movie, In A World is not so much about him, but about the competition once a hole opened up in the industry after his passing.

It is a completely fictional film with made up characters and relationships. The thing that’s so clever is that it’s set in a real time, after the passing of a real person. And it’s about an industry that we have never seen a movie about. What we end up getting is a romantic comedy that is more about the job and unusual storyline than it is about the romance. In other words, it manages to avoid all of the usual cliches of romantic comedies, which is something that even Amy Shumer and Judd Apatow’s film, Trainwreck, couldn’t do.

At the start of the movie, we meet Carol (Lake Bell) a girl in her thirties who still lives at home with her father and doesn’t make much money at her job. Carol works as a voice coach. She teaches accents to actors who are having difficulty with perfecting their voices, such as Eva Longoria, who has a funny scene early on in the film. While Carol does have a steady job, she also has a problem. Her father, Sam (Fred Melamend from A Serious Man,) wants her to move out. He has a new girlfriend who is about half his age (she is actually younger than Carol), and this new girlfriend wants to move in. That prompts Sam to tell Carol it’s her time to go. He tells her it would be great if she could be gone by that night. What a jerk.

Carola goes to live with her sister, Dani (Mikaela Watkins), and her boyfriend, Moe (Rob Corddry.) Meanwhile, her father is spending a lot of time with his new best friend, a man named Gustav (Ken Marino.) Both Sam and Gustav are in the movie trailer voice over business. Since the death of LaFontaine, Sam has been the next go to guy. In fact, even while LaFontaine was still alive, Sam was always the number two, and now he’s ready to hang it up and pass the torch. He chooses Gustav as his protege, going out and supporting this guy for the biggest jobs.

The fun starts when Carol tries out for a trailer’s voice over and gets the gig. It seems to be a throw away tryout, where the person who was slated to do it didn’t show up and so they just asked her if she would like to take a crack at it, but as it happens, she is really good and wins over the part. I would have liked to see her record this voice over, but the movie intentionally shows us the start of the scene and the end of the scene, with her leaving the recording studio, with us having to only imagine how it went in between. To be fair, the movie does show us her record the voice over for a trailer later on, so maybe the decision was meant to build up how good she was so that when we finally did hear her, towards the end of the film, it had a little more weight and momentum going into it.

Carol’s sister Dani and her husband have some problems that they are dealing with, and Carol living with them only helps speed the inevitable up and point these problems out even more. Dani, for example, has a crush on a guy who comes into her bank and sits down with her on a regular basis. Carol asks her sister to record his voice for her, since the man has a very thick accent that she needs to learn how to immitate for her job. When Dani sits down with this man, after work hours, to record his voice, it turns into a little more than just a professional interview.

When Moe finds out about what happened between his girlfriend and this man, it leads to all kinds of craziness. This is all towards the middle of the film. The big staple of a romantic comedy is that the two characters meet and hit it off and get together in the first part of the film. Then they have a big fight about something somewhere towards the middle. And by the end, they get back together. In the movie In A World, the romantic split isn’t between Carol, our protagonist and a man, but instead it’s part of a side plot with her sister. And it doesn’t happen at the end of the movie, but in the middle. This makes for a refreshing change.

Carol has some romantic issues of her own. There’s a guy at work who is really cute and sweet and charming, named Louis (Demetri Martin.) He likes Carol a lot, but tiptoes around how to tell her. At one point he asks her to go to a party with him, but then he finds out that Carol is already going to be there with her dad and sister. The party is thrown by Gustav, the biggest name in the business at that moment, and he has just lost a job to Carol with the movie trailer voice work she won. Only Gustav doesn’t know that Carol is the one who beat him at the job.

This is interesting conflict. Especially when Carol finds a secret room in Gustav’s house that leads to a romantic fling with him. And whatever you might expect from the usual movie that hits beats anywhere close to these, doesn’t happen here. When Louis finds out about Carol and Gustav, for example, he’s not mad. In fact, he is completely indifferent to the point where it is a non-issue and he still continues to pursue her. It’s like this movie is saying, “yeah, we see those usual cracks and alleys that other movies tend to get stuck in, and with us, we just pass right by them and keep on going.”

Since the romantic tension and the central conflict of the movie is not between Carol and Louis, (although a really sweet romance certainly is), then the conflict has to come from somewhere else. And it does. Carol’s father. Sam is competitive and vindictive to the point where he finds out his daughter is being considered to do voice work for a movie trailer, and he tries to sabotage the opportunity for her. All of it is powerful and completely original takes on this kind of story. There are so many subplots here that are given just the right amount of time to grab our attention without losing us, that it all works out very smoothly. The romance between Carol and Louis is fantastic. The moments leading up to their first real kiss are really charming. And the competition over the big movie trailer job and somebody will be getting is also pretty great. This is a really terrific movie that prides itself on how creative it can be in the hardest genre there is to find creativity. In A World is unique and innovative and impressive the whole way through.