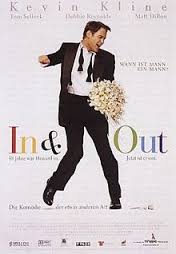 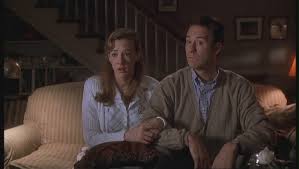 One Liner Review: a very generic movie about a small town scandal that is occasionally funny, but more often just the usual run of the mill.

In and out is a movie about a high school teacher who gets involved in a little scandal that blows up into a huge news story. This becomes a sort of sensation in the small town where he works. The teacher is Howard Bracket, played by Kevin Kline, and at the start of the movie, he’s in the days before his wedding. He’s marrying Joan Cusack, and the two of them have been engaged for three years. Apparently she used to be really fat and lost all of this weight for Howard. That’s one of the many reoccurring jokes that don’t really work.

But the initial premise of the film is certainly funny enough. There’s a local celebrity, Cameron Drake (Matt Dillon) who is at the Oscars winning a best actor award. And during his acceptance speech for playing a gay soldier in the military, he thanks his former high school teacher, Howard Bracket. The only problem is, at the end of the speech, he announces that Howard is gay. And Howard isn’t gay.

This all suddenly becomes a mess. First, Howard has to deal with his fiancé, explaining to her that he has no idea what drake is talking about. Then his parents show up at the door and he has to have a similar conversation with them. At school, it’s his students who talk to him about why drake probably thought he was gay. They give him advice about the way he stands and dresses and his hand mannerisms. It’s a pretty funny scene, especially in the way that Howard is listening to his students’ advice.

But for every funny scene in the movie, there are at least two others that are just silly and completely stupid. Bob Newhart, playing the villainous principal, for example, meets with Howard and tries to say the word homosexual, but can’t get it out. So Howard acts like he’s trying to say “homeroom teacher.” not funny. Neither are Howard’s mom, Debbie Reynolds, and her obsession with weddings.

The scandal becomes a national thing when news reporter Tom Selleck comes to town and starts doing a piece on Howard. Selleck follows him around and tries to catch him in his every move. It’s a bit like that Mathew Mcconaghey movie EdTV, from a few years back, in the way that Howard is practically running from the cameras, but can’t avoid the story that is ruining his life.

There is a very funny scene in the movie where Howard listens to a manly man tape, which is designed to get men in touch with their masculinity. That’s how it’s advertised anyway, but in actuality it’s meant to give a test to see if the man is too prissy or not. There is a voice on the tape talking to Howard and it starts out routine with shirt untucking stuff, but once the music starts, Howard just can’t control himself. Watching him struggling to not move to the beat, and yet unable to control his feet or hip movements is pretty funny. It only gets better when the voice starts yelling at him and calling him names. And by the end, he’s dancing away, not a care in the world. It’s the best and funniest scene in the movie.

The overall problem with in and out is that it’s just too simple. The premise is very direct and very one-noted. There’s the first third, which is everything leading up to and including the Oscar speech. This is where we get introduced to Howard, his parents, his students, his fiancé, and his life. We learn a little about they’re past and about how his wedding is taking place this week, and we certainly hear a lot about Cameron drake. Especially from Howard’s students.

Then there’s the announcement. The first major plot point of the movie. From there, we are in the second act or second third of the movie as Howard is trying to do cleanup work, hoping to prove to the whole town that what Cameron drake said on national TV is just not true. Howard goes to a priest who insists that he is gay, and goes to his own bachelor party where all the guys can talk about is his obsession with Barbara Streisand movies.

And then there’s another secret that comes out which relates to the first one (the announcement), and absolutely changes everything. All of a sudden Howard’s not denying things, but accepting them. And there’s a hell of a backlash that comes along with it. His school, for one, wants him fired, and that leads us into the climactic graduation ceremony, which is more than a little lame.

In and out is a movie founded on a fun premise, but not really enough for a whole movie? There needed to be more characters and more subplots. Maybe Howard could have had a best friend whose wife was having an affair. Or maybe the friend could have been the one having the affair. With only the Howard story going on in this movie, the film puts all it’s eggs into one basket. Aside from the problems with the simplicity of the plot, the movie also is not all that funny. It’s hit and miss here, sometimes hilarious, but more often not. The movie is just a little too wholesome and made for the mainstream. It could have used more edge and guts to push the envelope a little. As it is, it’s an okay movie, but certainly nothing special at all. And it feels dated too.