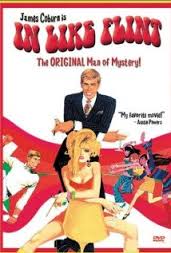 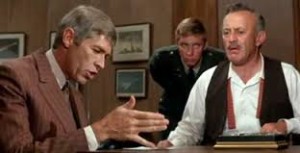 A very campy, very goofy spy movie that has some fun and clever ideas, but ends up getting tiresome the longer it goes on.

In Like Flint is the movie that Austin Powers is probably based on more than any other. Sure the bond movies are what it references over and over again, with characters and plot devices that literally come out of those 007 films, but as far as campy tone and psychedelic sixties atmosphere, it is all in like flint. This movie is a sequel to a film called our man flint which was made a year earlier, but I haven’t seen that one, and can’t imagine it’s all that different in tone and ideas to this.

The movie stars James Coburn as a top secret agent working for the government. Only, unlike James Bond, flint is more like a free-lance kind of guy who the government comes to and hires to help them out with a problem. and derek flint lives in one of those playboy type homes overlooking the ocean with a ton of beautiful young women working for him. it is so ridiculous and campy that it reminds me of beyond the valley of the dolls or some other crazy sixties bell bottoms movie.

The best stuff in the movie comes in the very beginning. lee j. cobb is here playing lloyd cramden, who works for the government and is an advisor to the president. one day while on a golf course with the president, a man in a wheel chair comes up to them and freezes time. everyone is frozen except for the wheel chair man and his two handlers. the handlers turn out to be women and the wheel chair man is actually an impostor who is about to pose as the president.

When time unfreezes, cramden looks at his watch and realizes that something strange has happened. the president had asked him to time the length of his golf swing (nice coincidence there), and so cramden had looked at his watch. when he looks at it again, three minutes have gone by. he can’t imagine what this means. why can’t he account for what happened during these three minutes. the funny thing is that if this really did happen, that you looked down at your watch and couldn’t account for a few minutes, you would think it was just you, and let it go. but here, cramden takes it to mean something and goes forward with it.

Cramden then goes to find flint and hire him to help solve the case. this premise is so simple and silly that it almost reminds me of those old encyclopedia brown children’s books, where maybe a watch or clock broke on a certain time and then started up again and the boy detective has to figure out not only why it stopped, but what transpired during that small window of time. still, as silly as it is, seeing everybody frozen like that is kind of neat and certainly one of the better moments in this movie.

Another comes when cramden goes to see flint at his home and finds the guy out by his pool training dolphins. this guy flint has dolphins swimming around in his pool. if that’s not ridiculous than i don’t know what is. and of course he’s cool as a cucumber and gladly takes the case. it’s a good thing too, because things are about to get a lot more messy for cramden.

Cramden now goes to a restaurant where he is sitting alone at a table and gets approached by a beautiful woman at the table beside him. he knows that he recognizes her from somewhere, but can’t figure out where. and then he ends up getting knocked out by something, waking up and getting arrested, and trying to figure out exactly what happened. luckily he hired flint before any of this happened.

The action in this movie is very light and dopey. the film is a comedy above anything else, and it is meant to be funny how ridiculous the action is. for example, if flint wants to get away, he just throws his hand up in the air like a karate chop and the guys around him basically fall down. they don’t get back up, like they would in an action movie of today. once they take one hit, of any kind, they are out of commission. having seen haywire, the steven soderbergh movie, last week, where characters weren’t down and out until they had been hit and beaten over and over again, seeing this sixties kind of take on the spy genre is kind of funny.

While I didn’t love the movie, I did like the atmosphere and actors involved.  James Coburn definitely has the kind of suave appeal that sean connerey brought to the bond movies. and lee j. cobb is always fantastic. from his role in 12 angry men to his bad guy in the movie on the waterfront, he is one of the most recognizable actors of the olden days. and here in this movie, for the first time that i have seen, he’s playing a good guy likable character.

The movie might be fun in a campy, light hearted take on the spy movie genre kind of way, but it is very dated and doesn’t hold up to the movies of today. i suppose austin powers is the movie that really represents what this film would be like if it was updated. that’s kind of ironic considering the premise of that movie is that everything is outdated and from the past. but at least in Austin Powers, the humor was the kind we could relate to, even if the background was all this campy sixties kind of stuff. in like flint is an okay movie, certainly fun in many ways, but as far as story and holding your attention, it definitely loses it’s mojo after a while.