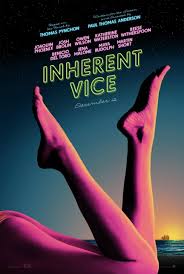 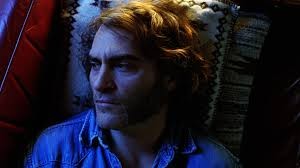 Way too convoluted, complex, and confusing, this movie might have some artistic merit, but as a cohesive story that can actually be followed and navigated, it does not work at all.

Inherent Vice might look and sound great, but it’s a disaster in storytelling. This movie has too many stories and too many characters to the point of being nearly impossible to follow. It doesn’t help that director Paul Thomas Anderson does very little to help us make sense of the plot. Sure, there’s a girl doing narration about what’s happening and her take on it, but Anderson constantly introduces new characters and often does it by just having another character rattle off a bunch of names. How about giving us something that lets us put a face to these names? This movie has it’s main character, Doc (a private detective), take on three cases at once, and with every new character he meets, a whole new storyline opens up. Look at the dentist, and how meeting him leads to a girl he is seeing, and that leads to the girl’s father, and none of this has anything to do with the rest of the movie. It’s like there was no “stop” button, when making this film, and they just let the string keep unraveling for as long as it could go. That explains the two and a half hour running time. There’s a lot in the first half that works, before the film becomes too complicated and unreasonable. If only this movie had the willingness to cut more and keep itself in control.

Inherent Vice is a mess of a movie. It wants to be a Robert Altman movie (The Long Goodbye, perhaps) tied together with the Big Lebowski. That means it wants to be this hazy, easy-going movie about a guy who just wanders into things, carefree, and finds himself mixed up with all kinds of cases in the seedy underworld. The reason why it does not success it because it overcomplicates itself around every turn. What we get in actuality is a movie like the Big Sleep, only not only does it have an excess of characters (like that film did), but also an excess of storylines. This movie doesn’t seem to understand that the human brain can only process so many names and situations. It doesn’t understand, or it doesn’t care.

The first portions of the film are actually quite good. That’s because those come at a time when he haven’t been given too much information yet, and when things are still making sense. The movie opens with a girl named Shasta showing up at the beach-side bungalow of a man named Doc (Joaquin Phoenix), a private detective. Doc spends his time smoking pot and lying around on his couch. When Shasta shows up, he doesn’t even know she’s in his place until she is right next to him. Once they start talking, she gets right to the point, explaining why she needs help from Doc.

Shasta has been seeing an older man named Mickey Wolfman. Mickey is a real estate tycoon who is married. His wife is also seeing another man. Now, his wife and the guy she’s seeing have a plan to get Mickey committed to a mental asylum. If they can do that, then all of his money will go to his wife. And they want Shasta to help them get Mickey to sign himself in there. So, just with this story alone, we have four characters involved in something. It’s already starting to get a little complex, and what might have helped is seeing a flash of each of these characters as Shasta was explaining the story, so that we could put a face with each name.

Instead, what we get is a different girl, standing by the beach, narrating the story. Her take on what’s happening does help guide us, and helps us make sense of things from time to time, but there are other strategies, (such as actually showing us those characters), which would have been much more helpful. Especially since the complications are really just beginning. Doc goes straight from hearing about this case from Shasta to meeting another client with another case. This is Tariq Khalil (Michael K. Williams, best known as Omar from The Wire), and he is reporting that a man who owes him money has disappeared. The man is Glen Charlock, and he was the bodyguard to Mickey Wolfman.

With that in mind, the two cases connect. That’s what you want in a good mystery. Stories that all go together as one story. Doc starts investigating, going to a real estate strip that is owned by Wolfman. There is only one business on the strip that’s operational, and it’s a brothel / massage parlor. Doc goes in, gets hit over the head, and wakes up on the desert ground next to the body of Charlock. The police have him surrounded and he gets brought in by a guy named Bigfoot (Josh Brolin), the detective investigating this case. Doc’s lawyer, Sauncho Smilex (Benecio Del Torro) shows up to help get him off, and we are back to the races.

Now, at this point, everything is good. The stories tie together and are not that hard to follow. The Josh Brolin character is extremely funny, with his obsession with banana ice pops that look like phalic symbols, and the way that he eats them. There’s a great moment in the car when Doc just stars at Bigfoot eating the popsicle. There’s also a funny scene where Bigfoot calls Doc and tells her that they went into Shasta’s home and she’s “gone.” he makes it sound like she’s dead, and keeps repeating that she’s “gone” in a sad way, until he finally reveals that he just meant she wasn’t there.

There’s no question that the movie was on the right track and had the potential to be something great. But then, suddenly, like a stroke of insane nonsensical planning, the movie introduces a third case and just goes off the rails. That’s in large part because the third case involves a ton of new characters. There’s the woman who works at the D.A.s office, who Doc is sleeping with (played by Reese Witherspoon.) Then there’s the former heroin addict (jena Malone) who wants Doc to find her husband, and the husband who Doc finds (Owen Wilson), who is an informant with the police and wants to get back to his family. He’s in hiding for now.

There’s also a lot of talk about a boat, known as the Golden Fang. So here we are, with all of these mysteries on our plate, and then the woman from the brothel (Jade) comes up to Doc and tells him to “beware of the Golden Fang.” Another mystery? Seriously? You might think that the movie is done introducing characters and that now it’s time to start tying things together. No such luck. This movie never stops introducing characters. Literally in the last handful of scenes it is still bringing in new characters, with just about every new scene.

Next up, we get a crazy drug addict dentist, played by Martin Short. The only reason he comes in is because he works in a building that looks like a golden fang. But just from bringing him in, we get the new characters of a girl who is his patient and who he is sleeping with, and then another scene later on that involves Doc meeting with this girl’s father. It gets so crazy that at one point, Doc visits an insane asylum and sees all different characters there who we have met in the various stories throuhgout the film. There’s Owen Wilson, Mickey Wolfman, and even a bodyguard with a swastika tattoo on his face that we have heard about, and will now be seeing more of in the later portions of the film.

Inherent Vice feels like the worst of what Robert Altman might have done. Altman was a guy who threw tons of different stories at the screen and then gradually tied them together. The difference is that they did all tie together. With Inherent Vice, I’m not even sure if they actually do. The worst thing of all is that this is director Paul Thomas Anderson, who used to be one of the most promising directors of the nineties. Here’s a guy who rose up through the ranks with David Fincher and Wes Anderson. P.T. Anderson made Boogie Nights (one of my favorite movies of all time), then Magnolia, and Punch Drunk Love. He was on a role and continued that way when he made There Will Be Blood, his most artisitc movie and Oscar worthy film to date. But then in recent years, he has shown less of an interest in the public’s reaction to his films and more of a focus on art alone. Before this he made The Master, which was his first movie that I didn’t care for. Now with Inherent Vice, the number comes to two. In a row. Clearly Anderson still has the artistic touch, but he might have lost his grip on storytelling, and without it, his movies aren’t even close to what they used to be.