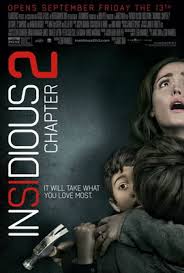 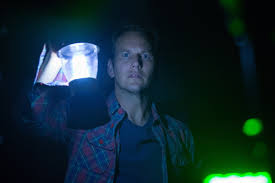 Not very smart or scary, this film is a cheap attempt to cash in on the success of the original, without any of the same clever angles or appeal.

This is a very lousy horror movie that really only points out what a fluke the first movie turned out to be. That first Insidious film was great. It was smart and original, and this sequel means to copy it every chance it can get. This time the family is staying with Josh’s mother, in a different house, but otherwise, the ideas are the same. The scares don’t really work and neither does the plot, which introduces a new storyline about a new character that he nearly nothing to do witht the first movie. Meanwhile, Lorraine (the mother) is wasting time going from place to place with an entourage she put together, and Josh (Patrick Wison) is going around trying to kill his family. The first movie worked because of a combination of it’s story and scares. The sequel just can’t keep up.

Insidous 2 is a very poor attempt at a horror movie. It has no fresh or original ideas, and instead, simply tries to combine the original film with The Shining. The first movie ended with something being awoken in the husband character, Josh. This sequel continues off of that, having Josh deteriorate and turn into a psycho who wants to kill his family, much like Jack Nicholson’s character in The Shining. The difference is, that movie was about so much more, including the hotel, the seclusion, and the family.

Insidious 2 knows all that and is okay with it, thinking that it has more to offer in other areas. It doesn’t. The first film was a surprising success because of its brave originality. Directed by James Waan, who made the Saw movies, and also this sequel, that movie was smart and creative and took its time figuring out the best ways to get scares. Nothing about it felt cheap. Instead, it was about being smart and original. Even the humor between the two assistants of Eloise worked there, and they try to get it back again, in this movie, only it’s just not the same.

For the premise here, Josh and Renai (Rose Byrne) take their two boys to live with Josh’s mother, Lorraine (Barbara Hershey), after the murder of Eloise that ended the first film. That murder took place in their house, and while the police are investigating snd taking their time with the house, the family has relocated here. We start the movie with an early flashback of Josh as a boy and his mother calling in a younger Eloise to come and see him. There’s a man named Carl who was there working the case before Eloise, and when it got too much for him, he’s the one who called the older woman to come help.

Josh says that there is a ghost woman in the house with them. He leads Eloise to where it is hiding in a closet. She reaches her hand in and it gets scratched badly. Eloise comes back downstairs and Josh stands up, while hypnotized and in a trance. He walks forward, points to a door, and the door opens. We will find out more about this later. From there we move into the present where Renai is fielding questions from a police officer about what happened to Eloise.

I like the way this movie continues off the last one, showing the aftermath of that horrific event. We see the rest of the scene, after Eloise was killed and Renai confronted Josh. Now we see the police investigation. The detective is suspicious of Josh and tells Renai he’ll let her know what he finds. He puts the idea into her head that it might have been her husband, as if that idea wasn’t already there. She goes home to find out.

All of this has been fine. It is a very decent beginning, using the story of the last movie to keep propelling forward. In fact, this opening and continuation off the last film is the best thing about this movie. Once at Lorraine’s house, however, the new plot starts to take form, and it is pretty lousy. Everyone starts seeing things. Ghosts walking around the house. Lorraine sees them first. The Renai, and she is even attacked by one of them. Dalton, the boy who got possessed in the first movie, hears his Dad talking to one of them each day.

None of this is scary because it is doing the opposite of what a good horror movie does. It is showing us too much. When we have the idea that a ghost might be there, it’s scary. When we actually see the ghost, and no for sure, we get to tell ourselves, “it’s not that bad,” and “this is kind of silly.” Yet director Wong parades his ghosts around the house, as if he has no idea how to create tension and momentum. He also uses lots of fake outs, including a baby walker the lights up and makes noise, and is brought in to get scares on three different occasions.

While the family is being terrorized at the house, Lorraine goes to seek help. The two assistants of Eloise have gone into her house after she was murdered, looking for answers. They found a tape from when Josh was a little boy and met with Eloise (it is dated 1986, but is more accurately around 1976.) When Lorraine comes looking for help, she finds these two guys and they join up with Carl to start making sense of the situation. Carl brings out his letter dice, which he rolls out onto the table for the ghost to spell out words.

The Lorraine and Carl story is the real mission story of the film, with them going from place to place on the hunt for answers. Unfortunately it amounds to a giant waste of time, since they don’t  get very much. First, the ghost uses the letter dice to spell out a hospital where they should go. Lorraine used to work there. Next, the ghost spells out the name of a, old  man who was once the patient of Elaine. Lorraine starts telling stories abut him, like how the man attacked Dalton. They go to the man’s house and from there, find a room full of dead bodies. No real answers. Just bodies.

As it happens, there aren’t any real answers here. Whoever this ghost is, it has to do with the old man and what he was like when he was a child. It’s an entirely new story from the first film, and in no way a continuation, like a good sequel should be. Plus, Josh doesn’t even feel like the same character. He is in this maniac of a trance throughout nearly the entire film. The cool area that the first film came up with, known as the Further, is barely even used until the very end. I suppose that’s the same pattern as in the first movie, but I was really hoping this movie would expand on that area and be all about taking us into it. Instead, it wants to repeat the same one-liners and ideas. So instead of Eloise telling the parents, “it’s not the house, it’s your son,” which is arguably the best line from the origiinle film, this time we have Lorraine tell Renai, “it’s not the house, it’s my son.” This movie is ab absolute wasted opportunity.