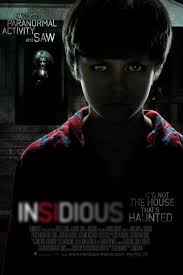 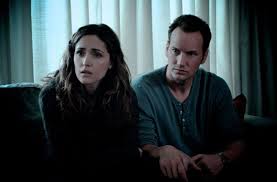 A very scary and freaky movie that builds up to some pretty intense revelations.

Insidious is a thriller with smarts. it’s creative in all sorts of ways, starting wiht how it’s first few acts are pretty routine and realistic-feeling. this movie takes a standard premise about a possessed or comatose child, and brings it into a whole other world. literally. the movie has scares from the very beginning, and it’s good and interesting from the start, but boy does it end up going places. the plot is very rich here and continues to build all the way until the final moments. there are surprises and twists around every turn and most of them really come out in the movie’s second half. sometimes it goes too far and runs off the rails, but for the most part, this is a very enjoyable and unique film

At the start of the film, there’s a family of four living in a nice suburban home. The parents are Renai (Rose Byrne) and Josh (Patrick Wilson), and they have two sons named Dalton and Foster. The family has just moved into the home somewhat recently and the attic is still packed with Renai’s boxes. She goes to work on them one day and leaves the stairs to the attic open. That’s when Dalton wanders up, falls off a ladder that breaks under his feet, and gets injured. At first the injury seems small, but it turns out to be much bigger than anyone expected.

The next morning, Dalton won’t wake up. Josh shakes him and yells and does everything to wake the boy, but he is trapped in a coma or a deep sleep. They take Dalton to a hospital where a doctor tells him that there is no medical explanation for what is happening with Dalton. The couple takes their son back home where he stays in a bed that is connected to all kinds of tubes and machines. That’s when strange things start happening around the house.

First, there’s a loud noise coming from upstairs that Renai hears over the baby monitor. After the noise, it sounds like a male voice is speaking through the monitor, and she runs up to find her baby crying, but nobody else there. Next, Renai approaches Dalton’s bed one day and pulls back the covers to reveal blood stains and the print of a bloody hand, by Dalton’s feet. When she one day is sitting in the bedroom and sees a figure walking around, she decides that she has had it.

Renai gets Josh to agree to move, and so they pack up and leave the house. Only their problems follow them to the new place. And things get much worse. This time, Josh witnesses the events for himself. First, there is a house alarm that keeps going off, and then a loud banging coming from Dalton’s room. When Josh throws the door opened and runs in, the room is a complete mess as if it was ransacked by someone. To make matters worse, their youngest son tells them that he sees Dalton walking around the house at night.

That’s when the couple turns to Josh’s mother, played by Barbara Hershey, who knows what to do. Hershey has had two very memorable roles in the past decade or so. There was Black Swan and now this. Both movies came out within a year of each other, (Black Swan being a 2010 release and Insidious from 2011.) Here, Hershey is a side player who brings a medium to the couple’s house. That medium’s name is Elise, and before she can come, she sends over her assistants to check the place out.

I like that the movie takes the time to send the two goofy assistants in before sending over Elise, herself. For one thing it adds humor to the film as the two guys bicker with each other and are incredibly weird. For another, it breaks the movie up a little, and spreads out the scares. Getting a change in tone, for some humor, is a nice relief. And the scares are still there, with the two guys going through the house and looking for things, while not being sure what they are about to find.

Then Elise comes and we are solidly planted into the second half of the film. She checks out the house and then tells the couple that the problem isn’t the house at all, it’s their son. She does a sort of reading over Dalton’s bed where she stares up at the ceiling and whispers to one of her assistants what she is seeing as he furiously sketches it. This is the coolest and most exciting scene of the movie, although there are plenty of other cool ones on the way.

Another one involves a sort of seance where Elise wears something over her face that looks like a giant gas mask. This is meant to snap Dalton out of his deep sleep and it kind of works, but only briefly. The movie has plenty of secrets that it’s keeping up it’s sleeve and it carefully lets them out one at a time. We learn about a sort of gift that Dalton about what it means. We learn of another dimension, known as the further, and the movie even takes us into it.

As the storyline starts to become more fantasy and less rooted in realism, it also starts to lose its way a little. On the one hand, the mythology and creativity of another world is kind of cool. But on the other hand the creatures we encounter in that world aren’t really put together well. There’s a guy with a red face, for example, who is more silly than scary. Still, the movie has plenty of surprises that really take you all the way through to the end of the film. We learn secrets about characters, and all sorts of neat things that we never expected to find out. I love how many different parts and levels there are to the story  and how much the plot develops as it goes on. Each new act of the film takes you further down into the hole. The intitial premise didn’t seem like it was incredibly original (how many movies are there about possessed children, going all the way back to The Omen and The Exorcist), but the places where this plot ends up taking the movie are pretty creative and unique.