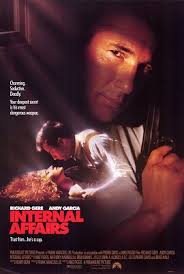 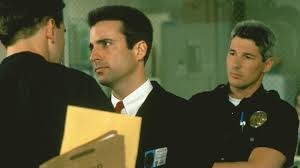 Predictable in it’s first half, yet still keeps you watching and gets more suspenseful as it goes on.

Internal Affairs was a good 90s cop movie. It seems like Andy Garcia has been around that genre quite a bit from this movie to black rain to Night Falls on Manhattan. And here he gets to be the golden boy, Mr. innocent, again. It’s a role he plays well, and so we don’t mind him repeating it, but at the same time, for Garcia, it’s just business as usual. And in many ways that’s what can be said about this movie, which doesn’t especially stand out over other, similar films in the genre.

While the film might not be much of a stretch for Garcia, here he is taking on Richard Gere’s corrupt cop, and for that actor, this is something different. It’s cool to see Gere in a villain role, and he plays it well. Gere doesn’t play the character loud or over the top or annoying in the way that so many Hollywood actors do when given this role. He’s not even especially funny. Instead, he’s just a guy. He’s a guy with multiple wives, tons of kids, and an agenda to keep to in order to support them all.

The movie opens with Gere’s character, Dennis Peck, reworking a crime scene, making it look the way he wants it to look. One of his fellow cops has shot a man who he thought had a weapon, and peck steps up to help his buddy out, planting a knife in the victim’s hand. His other partner, Stretch (William Baldwin), has just assaulted someone, and is now a mess after seeing this other guy get shot. It is peck that comes out of the shadows to save the day for his friends. He’s the guy who knows what to do.

From here we move to an office building and interview where Andy Garcia’s character, Raymond Avila, joins the internal affairs unit. I like how his boss, the man who interviews him, kind of spells out what the job is for the audience. He talks about how cops might say that they hate IA (internal affairs), but good cops don’t hate it at all, because it makes them look good, like they have nothing to hide. It helps cement their legitimacy. And the movie takes place in Los Angeles, where corruption in the police department is a notorious part of history, going back to the days of Mickey Cohen.

Avila gets the assignment to investigate van stretch (Baldwin) and right away, he freezes when he sees the photo of him. He knows the guy. They went to the academy together. Avila’s new partner, Amy Wallace (Laurie Metcalf) asks him if he wants to pass the case off to someone else, but being that it’s his first one, he takes it and begins.

Now we’ve seen plenty of movies where one cop is out to make a case against a criminal and takes his work home, and ends up making this target his number one priority in life. And this movie certainly has all that. But it’s got two things that most movies in this genre don’t have. The first is that it has the two main characters somewhat friendly with each other. They actually have conversations, just talking to each other.

Sometimes there is that one scene that the characters share in the movie, like in heat, where Deniro and pacino sit down in a cafe for one brief conversation. But here it’s different. Avila and peck meet up and talk again and again. This is long before peck knows that Avila is looking at him, of course. First they meet in a police hallway. Then another time, Avila shows up to ask peck some questions about his partner, Van Stretch. But the third time the two of them get to talk, things turn less civil and peck talks about Avila’s wife and what he would like to do to her. From that point on, the two of them are not so friendly.

The other thing that is cool about this movie is that the target changes. Most films about one guy going after another guy announce the mission from the very beginning and stay with that mission the entire time. This movie doesn’t. Peck is not Avila’s original target. Instead, Avila starts out by going after stretch, peck’s partner. It is only after the case develops and after Avila learns what is really going on behind the scenes that the case changes.

The movie also has a few tricks up its sleeve. Some of them are predictable, some of them are not. When one character decides to roll over and talk to infernal affairs about another, you can bet we know what’s going to happen to that character before he ever gets close to talking. But then there are some side plots that are used as red herrings, which means they don’t factor into the story about Avila going after peck at all. And that’s a good thing, because they lead us in the direction of thinking they might. In that way the movie avoids being predictable and actually keeps us on our toes. The side plot in particular that I am referring to involve a man who asks peck to kill his parents. When we see peck’s wife, Annabelle Sciorra, hearing a news report about this and knowing that her husband was involved, it seems like something’s going to happen. It’s pretty cool that we are wrong.

The movie is unafraid to have major characters killed, and that’s another cool thing about it. By doing this, the movie maintains its realism and credibility. There’s a great scene, for example, where the cops have tracked down the man who was involved in killing Peck’s partner, to a warehouse. But then the swat team shows up and comes after all of them, and we get a major action scene involving car chases, helicopters, and lots of guns. The movie has a lot going on, but it does fall into a usual pattern by the end, which is kind of a shame. It was a cool movie that could have just used a little more.