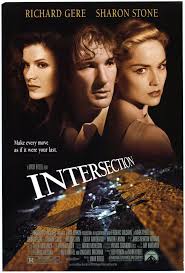 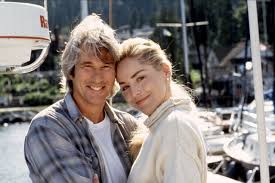 A well-made movie that just doesn’t amount to much with its standard storyline.

Intersection has one thing going for it, one gimmick, and that’s it. the gimmick is that this guy gets into a car accident at the start of the film, and during the accident things go to slow motion. he suddenly has a flashback that turns into a series of flashbacks about his life, and we don’t see the result of the accident until the end of the film. so in other words, the entire movie is one giant flashback while the guy is having the accident. that’s the gimmick.

this is a standard nineties movie featuring Richard Gere and Sharon Stone. by making putting the flashback idea right in the middle of the car accident, this movie is presenting a picture of a man who is about to die, flashing back over the events of his life. thankfully they spare us his childhood and really everything other than his last few years. but here’s the problem…if it wasn’t for this car accident opening and ending, would the story have anything really creative about it at all? Would it really be worth watching? Unfortunately, the answer to both questions is no.

the story has Gere’s character, Vincent Eastman, caught between two women. the first is his ex-wife, sally Eastman. the second is his current girlfriend, Olivia. when we first meet these characters, Vincent is with Olivia, but working with sally. they run an architect firm together, along with Martin Landau, in a kind of wasted role. Landau is in here just to talk to Vincent or sally every so often. he’s basically the friend character of the movie, which is a little strange since he is so much older. Vincent doesn’t have any friends his own age? what about sally?

we learn that Vincent and sally used to be married through the help of them having a daughter who they share custody over. Vincent takes the daughter out to lunch one day and she starts talking about her mom’s current boyfriend who makes pancakes in the shapes of animals. what a silly character trait. but that’s the way this movie is. everything happens just so without any room for realism. the truth is Vincent and sally probably wouldn’t be working in the same office together after getting a divorce, and if they were, then I’m sure he would already know she was seeing someone. especially if the guy stays over with his kid.

the movie is kind of a love triangle, but also kind of not. that’s because in the current storyline, Eastman never really gets with sally again. he’s with Olivia and things stay that way. towards the end of the film, he comes to a point where he starts deciding whether he wants to marry Olivia or cut her loose. why is it suddenly one or the other? he flip-flops back and forth between these two decisions like a guy who could just as easily be leaving it up to the flip of a coin. and how does he decide to tell her? either by a letter, or a phone message. whatever happened to waiting to tell a person something face to face?

it’s a little strange that the decision-making isn’t something that Vincent is dealing with throughout the film, and that it really only comes up at the end. how convenient. maybe that’s because the first half of the film or so is really just going back and forth with out of order flashbacks, giving us samplings of Vincent’s life from both before and after his divorce. we see him when he was with sally, sneaking off to a room in her parents’ house to have sex. the quiet whispering and secrecy of the whole thing reminds me of Stone’s restaurant undressing scene from Sliver. boy did this girl used to be a lot of fun. those were the days.

we go on to see the moment when Vincent and Olivia first meet, at an auction. they have some playful banter where she basically tricks him into spending a lot of money to purchase a clock. turns out she works for the auction company and it’s her job to bet on items in order to drive people up with their bets. Vincent leaves the auction and finds Olivia sitting at a table. he joins her, discusses one of her articles with her (she is a columnist), and the rest is history.

another scene we get treated to is the one where Vincent tells sally about Olivia. sally takes it well at first, and Vincent is upset about that. he wants her to show some emotion. he tells her that the reason he is leaving her is because she just doesn’t seem to care at all. when Vincent walks away, however, sally breaks a mirror. she does care, she just doesn’t want him to know it.

and then there’s the scene where the two women actually meet for the first time at a party, with Olivia showing up unexpectedly and getting drunk. none of these scenes really amounts to much. they are all interesting, but far from captivating or thrilling. in a world where we get mysteries and wild situations all the time, what is so special about this movie? the flashback structure is the only thing that keeps it from being terrible, but one would have hoped from more. maybe the characters could have actually had a love triangle, where Vincent was seeing them both at the same time. the movie alludes to the fact that this happened, with Vincent telling sally all the times he was working late he was really with Olivia, but maybe we could have seen some of it. maybe if we saw some of his lies, we could have been thrown into his boat and feared getting caught right alongside him. but the movie doesn’t do that. it just gives us a bunch of random flashbacks, one after the next. this movie might have had an interesting initial idea, but the way it was handled leaves a lot to be desired.