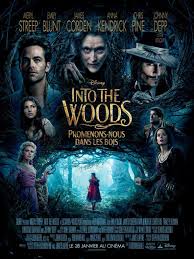 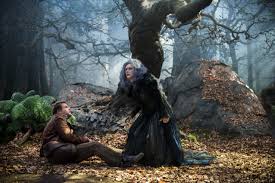 The story is great, but the musical numbers often take us out of it and the film just goes on for way too long.

This movie was really something fun and enjoyable for a while. the story was creative and witty in the way it merged all of these fairty tales together into one cohesive narrative about a baker and his wife who couldn’t have children. they were sent out on a quest to retrieve an item from each of the fairy tale characters. meanwhile, there were smaller other stories going on with each of those characters, such as red riding hood dealing with the wolf. the connections between each plotline were pretty great. the movie was moving at a nice pace, delivering with laughs and twists and fun, and then something happened. it fell apart. not in one quick moment or anything, but instead, the movie went on and on, well past it’s logical end point. a whole new plot emerged after the movie should have been over, and that plot just kept dragging further and further away from anything we cared about. it became filled with musical numbers that actually took us away from the story. if not for that final fourth, this would have been an excellent film, but instead, it ended up being just okay.

Into The Woods is a movie based on the famous steven sondheim musical. it’s a film directed by rob marshall, who turned chicago, (the movie based on the broadway musical) into a masterful success story. that was about ten years ago. Since then, marshall has not had much success, and his attempts at recreating spectacle on film, (such as his movie, nine), have all but failed. with into the woods, you can tell that there is talent at work and that the only problem is a filmmaker who doesn’t know when to quit. marshal (and perhaps the play this is based on as well), has a pretty clever story on his hands that stays on the screen long past it’s expriration date. it wears out it’s welcome and ends up leaving us with a bad taste in our mouths, simply because of how much it went on and how boring it became.

that’s a real shame, because for close to three-quarters of the movie, things were really moving along nicely. the whole premise of uniting fairy tales and fables with a simple quest is very witty and fun. at the Opening of the film a narrator announces that there is a baker and his wife who cannot have children. Now, they crave a child more than anything else in the world, and consider themselves to be cursed. then little red riding hood shows up in their store and takes a whole bunch of things without paying for any of them. this is the comedy at play.

after the baker and his wife (played by emily blunt), and little red, we meet jack ( of jack and the beanstalk), and his mother. jack has a cow that his mom wants him to take to the market to sell. after him, we meet cinderella and her step-mother and step-sisters. all of these characters have been the subjects of recent movies, as they are the classic tales that get retold over and over again. recently bryan singer made jack the giant slayer. not long before that, amanda seyfried starred in a little red riding hood movie, and now the latest version of cinderella is on it’s way out, directed by kenneth branagh. i mention this because the fairy tale craze has gotten a little out of control (witness last summer’s maleficent, about the villain from sleeping beauty.) so it’s nice to see a different angle on the usual tales that we have seena again and again.

after we have been introduced to all of these characters, we come back to the bakery where the baker and his wife are met with a sudden surprise. a witch shows up in their store with a story, a plan, and a deal she wants to make. she tells the baker of his father, who once stole from her, and how she cursed him. the curse was that this man’s son would never be able to have a child of his own. only now the witch has as offer that will help make that curse go away. the offer, or quest, is that the baker must bring the witch a lock of hair as yellow as the sun, a slipper as pure as gold, a cloak as red as blood, and a cow as white as milk. basically he has to find the other chracters and get something from each of them.

at this point, we meet rapunzel. she is locked up in a tower, as her fairy tale usually goes, only it is the witch who comes to visit her. a prince oversees this and decides to try out the tower-climbing by way of hair, himself. he soon falls in love with rapunzel and decides that he wants to spend the rest of his life with her. the prince is the brother of another prince (chris pine), who is cuurently courting cinderella (anna kendrick) each night at the castle ball.

now, back with the baker, he splits up with his wife, and we follow him into the woods. he comes across little red riding hood and jack, one at a time. with little red, he tries to wrestle her red cloak away, but feels too guilty about what he’s doing and gives up. with jack, he is able to persuade the boy (with a little help from his wife, who has joined up with him again), to trade the cow for some supposedly magic beans. little red, meanwhile, has a few scenes with a wolf (played by johny depp.)

one by one, the baker gets all of the items he needs. he cuts the hair from rapunzel and gets little red’s cloak when he cuts her loose from the wolf’s belly and she wants to repay him. i like how this movie shies away from showing us most of the scenes that we’ve seen before in these classic fairy tales, knowing that the last thing we need is to see them again. we never see jack, up in the clouds, with the giants, for example, but only see him come back down the beanstalk with treasures. we never see the ball that cinderella attends, but only watch the moment when she runs out each night leaving her slipper behind. and the connections between the stories are pretty great. it’s the songs which start to get in the way. once in a while there’s a really good one (like the song with the two princes on the waterfall), but most of the time they’re rather dull.

we get to the point where the baker and his wife have gotten a hold of all the items the witch asked for, and there’s a nice final twist about why she can’t accept the items. once this problem is solved, the movie should be over. there’s the setup, the annoucement of the quest, the actual going on the journey, solving the problem, the the final twist (or new problem), and then the solving of this. a full story has been told, from start to finish. and yet this movie keeps on going. once everything with the witch is handled, a new problem appears out of nowhere. this is where the movie goes off the rails.

a new villain shows up, who has yet to enter the movie at all up until this point. the timing is just terrible. consider that the movie should be winding down and ending and instead, it goes in the complete opposite direction. to make matters worse, at this point they decide to hit us with a barage of songs. it feels like one after another, and the biggest problem about these songs is that they take you away from the plot. whatever plot we were still holding onto with a little interest at this point, is basically erased. the story events are suddenly cut off by song after song. we start to get so lost and far removed from the film, that we sort of forget all about what was happening. this is not a good thing.

when you lose track of some of the main characters, and don’t even know what happened to them by the movie’s end, you know there was a problem. the final portions of the movie are so bad that some of these main characters start disappearing with little to no explanation of where they went, or why. it is such a poor conclusion that it hurts the movie tremendously. i still can’t believe how far this movie lost it’s way in those final thirty minutes or so, and it really was a great film up until that point. what a shame.