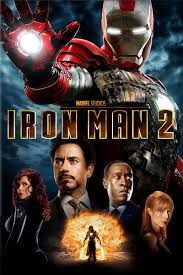 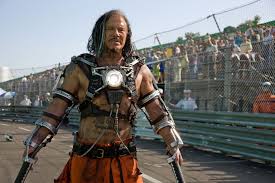 Not half as good as the first one, but still entertaining enough because of Robert Downey Jr, this is one of those movies that just tried to do too much without enough focus on quality.

Iron Man 2 is very different than the first film and not nearly as good. The original film was a monstrous success on all fronts, from the origin story and creation of the suit to the action scenes and the villain. This second movie has none of that. What it has instead are multiple villains (a trademark of most superhero movies,) and a story that is overloaded with ideas to the point where it feels like multiple movies all packed into one. The story of Iron Man that comes the closest to this is “demon in the bottle,” about alcoholism, but that’s a tiny part of what’s happening here in a movie that really throws everything in, and the kitchen sink too. This one features not just the introduction of Black Widow, but also War Machine. Oh, and did I mention Tony Stark invents an element? Yeah, there’s a lot going on in this one.

This movie uses something called the Stark Expo (basically the Worlds Fair. only with inventions,) as it’s start and end point backdrops. That’s an event that Tony is holding which kick starts the movie, but then also ends it, a solid year later. The Stark Expo was something that Tony’s dad, Howard Stark began. Which brings in the story of Tony’s father, and his clues about the element. And the father story also brings in our main villain,  a Russian scientist named Ivan Dankov – better known as Whiplash, although he’s never referred to as that here.) Vanko believes his father was betrayed by Howard Stark, and that he should have had the life that Tony has. Now he’s out for revenge.

This is also the story of the weapons manufacturer back in the states, (Justin Hammer, played wonderfully by Sam Rockwell,) who is Tony Starks competition, and not exactly his friend. On top of all of that, we’ve got a corrupt senator who wants Stark to turn over his suit. We’ve got Nick Fury, Colson, and the first real talks about the Avengers. And by packing so much in,  what really happens is some of the more important ideas and elements here get squeezed out. Like the villain. Whiplash. He’s only got two action scenes in the movie, believe it or not. There’s the one at the start, on the racetrack in Monaco, and the one at the end that concludes a battle with a ton of robots. And that’s it.He’s only got one dialogue scene with Tony. This character definitely gets short changed the most. No wonder Mickey Rourke was pissed about how this film turned out.

The movie opens with the Stark Expo, and with Tony Stark (Downey Jr,) showing off all his glitz and glamor and arrogance. He talks about he successfully prioritized world peace. There are dancers dressed like sports event cheerleaders doing Iron Man moves. And it all ends with Stark getting in his car, and being handed a summons to appear before a senate committee the next day. That hearing is about the committee members wanting Stark to turn over the Iron Man “weapon” to the government. But the scene is as much about introducing us to characters as it is about anything else. We meet the senator, (played by Gary Shandling in one of his final roles,) weapons expert Hammer (who is hilariously embarrassed by a video Stark plays here, ) and even the new look Rhodey (Don Cheadle replaces Terrence Howard, and there’s even a line to signify that – “It’s me, I’m here, get over it.”

That brings us to Monocco, and a grand prix race, where Whiplash steps onto the track wearing a an electric powered suit with sparking whips in his hands. He fights with Iron Man in the first big action scene of the movie, and by the end of it,  Whiplash is defeated. But so is Stark’s theory about being the only one with such a suit, and that nobody else will be able to recreate such a thing for at least ten years. It’s a quick scene, but a good one, and it’s pretty cool that Whiplash has the upper hand for a while. The suitcase that turns into a suit is also pretty fantastic. And by the end of it all, Vanko is imprisoned (Ivan Vanko – boy that name sounds a lot like Ivan Drago, the villain from Rocky IV, just saying.) Now, prisoner Vanko has caught the attention of Justin Hammer, who wants nothing more than to beat Tony Stark at his own game.

Hammer orchestrates a prison break for Vanko, and the two of them get together. This gives us the two villains teaming up. Every super hero seems to do this for some reason. Either they’re teaming up, or one leads to the next. But rarely is there only one villain in a film. Even the first Iron Man featured not just Obadiah Stain, but also the leader of the terrorist organization The Ten Rings (or at least the leader of the group we saw on screen.) But those other movies that get in two villains usually spend the movie dealing with the two villains. In this one, the villains are only a small part of what’s going on here. Tony and his company are another, as he promotes Pepper Potts (Gwenyth Paltrow,) to CEO of his company and then hires Natalie Rushman (Black Widow, only before Stark knows it,) as his new assistant. But it doesn’t stop there, with the two villains, and the senate hearing, and the reshuffling of the Stark company. There’s more. Tony Stark is dying. The arc reactor which is saving his life is also killing him creating blue veins on his chest and neck. That leads to the story where he invents a new element to save himself.

While the first movie was all about the moral issues and implications of being a weapons manufacturer and selling to other countries around the world, as represented by villain Stain (played by Jeff Bridges in a truly slimy and amazing portrayal), this movie doesn’t address anything close. It has Vanko say that the Stark family betrayed him and his family, but we get told that this is not the truth at all. Still the theme of fathers and sons is very apparent here. This is the movie where we meet what will be the iconic version of Howard Stark in the Marvel movies, the John Slattery version (Stark Sr. was played by a different actor in the first movie, and still another one in Captain America, the First Avenger.)

The movie follows a standard formula where at the start of the film the character is doing great, then in the middle, he hits a major slump, and by the end, he returns to stardom and redeems himself. That middle section surprisingly features very little action. There’s the quick moment where Natalie tackles driver Happy Hogan, (played by John Favreau, the director of the first two Iron Man movies,) to the floor in a boxing ring, and then there’s the fight in the house between Iron Man and War Machine. But this is played more for humor, (it is set to a remix of “Another One Bites The Dust,” by Queen, just for kix,) than anything else. It’s the scene that has Tony coming close to that alcoholic story, only here it really doesn’t seem to fit. Especially when War Machine shows up and only makes things worse. And before he gets there, when women are throwing bottles into the air and Tony is blasting them… c’mon. Can you say “lawsuit?” Just imagine that glass shattering everywhere on his guests. This is not very intelligent material. And it’s not exactly fun to watch either.

Following that fight, Tony is left on his own. Visited by the agents of SHIELF (which Tony learns his father was a part of), he is put under temporary house arrest until he starts to figure things out. And so he rebuilds and restructures his home, and then he rebuilds his suit using the new element. When he returns to work, Pepper has fully taken over as head of stark industries and Rhodey has taken the suit he “borrowed,” over to the military to get it weaponized by none other than Justin Hammer. Considering that there’s so little action in this mid-section of the movie, they sure do make up for it with a lot of side stories and featured characters popping in and out. Like Nick Fury and Agent Coulson.

For the climax, just to make up for the lack of action we’ve been experiencing, they hit us with about three actions scenes all at once. There’s Stark at the Expo flying away from a bunch of attacking robots, there’s Black Widow fighting a hallway full of Hammer security guards, there’s Stark and War Machine taking on the robots in a Japanese Tea Garden, and then there’s the final fight with Stark and War Machine taking on Whiplash. Had the actions scenes been more spread out throughout the movie, this one would have probably been a whole lot better. Instead, there are lots of different stories, but each one is only moderately interesting and entertaining. Even the villains are fun (at least Justin Hammer is,) but not given enough time to really make an impact. It’s unfortunate, because there’s a lot of good material here that just isn’t handled the right way or given the amount of time it deserved.