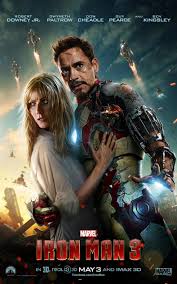 A very cool, very different kind of iron man movie, with an unusually interesting plot and a new set of defining rules.

Iron Man 3 is a lot of fun. It’s smarter than the average super hero movie, and also uniquely different. For one thing, it plays much more like a mystery-conspiracy film than like a standard superhero action movie. There’s more attention to detail here and to characters and explanations. there’s also a more open and free-spirited embrace of the crazy. There are twists and turns in this movie, and it is anything but standard. On top of all that, there’s a hell of a climax, making it a very worthwhile film, and a great way for marvel to start phase two of their movies.

Iron Man 3 is a movie that makes you feel good about superhero movies. It’s a film that isn’t afraid of anything. Well, almost. It refuses to kill off any of its good guy characters (even though there are lots of opportunities when it should have happened,) but other than that, this is a movie that breaks all the rules. Now every one of these rules that it breaks and lines that it crosses separates this movie from the other iron man films, but that’s a good thing. This is a new playing field, and the movie willingly shows us the world of possibilities that superhero movies now have the ability to present. There are plenty of negatives to this movie, but they are mostly small and unimportant points, and the positives far outweigh them.

For starters, this movie takes some major risks with who the villains can be, how the villains can be, what kind of twist surprises a superhero movie can feature when it comes to the villains, and even what kind of equiptment the main character can have. Tony Stark’s iron man suit has never been more versatile than it is in this film. It comes apart into pieces and then the pieces fly at tony, one at a time, locking up on his body. This comes in handy in all sorts of ways, including tony having the ability to send the pieces flying at other people, and also having the ability to run and jump at his suit and fall into it, while in mid-air. He also has the ability to drop out of his suit in an instant, with the suit opening up to let him out. And then he’s also got the ability to control the suit as if it were a robot, when he’s not even inside it. All of these ideas are new to the iron man world, and they add a lot of cool moments to the movie.

At the start of the film we are listening to tony’s voice over as he tells about the way things have become since the last time we saw him. this movie embraces the avengers film and the fact that tony and his friends took on aliens. it even talks about how tony fell through a worm hole into another world and instead of forcing that on us and making us just accept it, without explanation, this movie takes the time to deal with it. the storyline here actually has tony struggle to deal with what happened to him when he was with the avengers. he has nightmares and panic attacks and is a psychological train wreck whenever someone mentions the events of new york. for these reasons tony has become distant from his girlfriend, pepper potts (gwenyth paltrow), and has built a ton of iron man suits, feeling very unsafe and insecure.

aside from this current story about the basket-case tony stark, we also get a flashback, early on, to 1999, where multiple characters are introcuced. at the end of the second movie, tony and pepper started up a relationship, and since that continues in this film, getting the flashback is our only real opportunity to see tony in carefree womanizer and playboy mode. the flashback shows us an attractive female scientist named maya hansen (rebecca hall), who wants tony to look at a project of hers that regenerates plant growth. then there’s another scientist, aldrich killian, (guy pearce), who also wants tony to take a look at what he’s doing and maybe invest with him. tony isn’t really interested in either one of them. he likes maya only for the prospects of having a one night stand, and sends aldrich to the roof for a fake meeting, where tony never shows up.

both of these characters reappear in a major way in the present day of the film. and then, of course, there’s the mandarin. the storyline of the present day tony stark has this terrorist, the mandarin (ben kingsley), using bombs in public areas for no apparent reason at all. nobody knows who he is or where he comes from, or even what he wants. and yet the mandarin has a very public face, putting videos out that make strange comments and claims. he talks about the way that america takes certain ideas and develops them for the mainstream, pretending that they are chinese when really they are completely fake. such ideas include fortune cookies and the grunman theater in hollywood, los angeles.

aside from the mandarin situation, there is also something else very mysterious going on. there are people who dress like government agents and have something strange going on inside their bodies. they develop a red inner glow when they are attacked or injured, and they also seem to sometimes spontaneously blow up. when happy hogan, tony’s former driver (played by john favreau), is injured in one of these explosions, that the mandarin takes credit for, tony issues a public threat to the mandarin, on national television.

the next thing tony knows, the mandarin is calling him out on the threat and attacking tony’s malibu home with helicopters and missiles. the way it all goes down, with characters seeing the helicopters on tv before seeing that they are right outside their very window, is a little silly, but it still leads to a cool action scene. this is the mickey rourke attacking tony on a racetrack in monoco- scene of the movie. it’s the first big action scene of the film, and it comes a solid ways in. that’s testament to the fact that this will be more of a conspiracy-mystery film than a standard action movie. it will be more plot driven then superhero movies generally tend to be.

aside from potts and happy and tony embracing the events of the avengers, another link to the other movies and returning character is jim rhodes, played by don cheadle. rhodes has a version of the iron man suit himself, which was called war machine in the second film. this time it’s called the iron patriot and i like the way the movie takes the time to explain why. it even becomes a source of humor as tony hates the new name and likes the original name that he gave the suit in that second movie. i like the way that this character changes in each film, to become a more beefed up and high tech model. and don cheadle is great in the role, a fine replacement for terrence howard, who played the part in the first iron man movie.

there are large parts of this movie where tony stark is out of the iron man suit, and that actually works out nicely. it helps with making the film more of a mystery than a standard action movie. stark gets to play detective during the movie’s second act, from a remote shack in tennessee, where he gets some inspiration from a kid. when i heard that a kid was in this movie, i immediately thought it was a cheap ploy by disney (the studio that produced the movie), to get a wider audience, but as it happens, the kid storyline works. nothing in it is sugar-coated the way one might expect.

the movie isn’t great in it’s first half, with lots of trying to figure out where things are headed and what the film’s plan is. Setting the film around Christmastime seems a little strange, but when you realize it’s a Shane Black movie, and that’s just what he does, it makes sense. And the movie does capture that Christmas-feel, with all of its songs and decorations. Still, the first half is just okay, and not completely thrilling, but it gets us ready for what’s to come… the real  fireworks. And they sure do come. there’s a hell of a twist that plays with everything we thought a superhero movie could do to it’s villain, and then a pretty amazing climax. by the end, we feel like we are watching a movie called mutants vs. robots, and the action really pours it on in a major way. iron man 3 does have it’s flaws, but it is smarter and cooler than most superheros dare to be. i love the way that it never takes anything for granted and explains out small details, knowing the fans will be interested. the villains are also extremely cool and unlike any villains in previous iron man films. that represents the new direction that phase 2 of the marvel movies is headed, and iron man 3 kick-starts that phase very nicely.