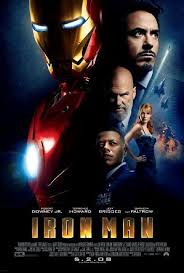 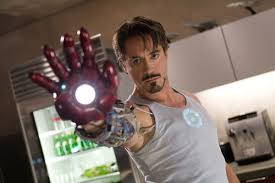 Iron Man is the superhero movie that gets everything right. The last time a superhero movie was anywhere close to this good was Christopher Nolan’s first batman movie, Batman Begins, and even that film lacked a sense of humor. Iron Man, on the other hand, has got humor in spades. And yet it’s not a comedy. It’s an action movie with a lead character, Tony Stark (Robert Downey Jr.), who is just a laid-back playboy billionaire with a hell of a sense of humor. This guy is not only relaxed and funny, but also super smart. His one flaw is arrogance, and he doesn’t seem to care about that one a bit.

The movie opens with a car ride in military hummvees, through a desert in Afghanistan. We get into one of the vehicles with Tony Stark and a bunch of soldiers and listen to their conversation, which is filled with jokes. Then suddenly the hummer they are riding in blows up, the men outside of the vehicle are killed, and Tony ends up getting taken prisoner by a group of terrorists. Hell of an opening. Great setup. And now the movie cuts to twenty-four hours earlier and we see an awards ceremony that begins with a video montage of Tony and his father and the way Tony rose up and took his father’s place. The video is filled with magazine covers and newspaper headlines about Tony’s life in the technology business, and it also shows a lot of Obadiah Stain (Jeff Bridges), the character who used to be the partner of Tony’s father. Now Obadiah is Tony’s partner.

Stark industries manufactures weapons and that’s the reason why Stark is out there in the desert to begin with. He’s there to demonstrate a new missile, known as the Jericho. He even gives a cool little speech before the demonstration about how the best weapon is the kind you only have to fire once. Then we get the demonstration and then the scene of him in the hummer and the attack. Now we are back to where the movie began, and ready to move forward with the story. Lots of movies begin with the flash forward, the same way that this movie did, but the scene that they are flash forwarding to doesn’t actually come until the end of the movie. This movie takes a very different approach. It goes back to just a little bit before the event to show us the immediate situation leading up to it, and then we are off an running, all caught up and where we need to be. It’s a very smart approach.

Now come the traumatic situation where Stark is being held captive. He is a prisoner in a cave, being held by a group of terrorists, and being forced to build a weapon for them. Only he doesn’t build it. Instead, he builds a suit which is big and clunky and will be the original prototype for the Iron Man suit. He has a pretty great escape scene where he slams down his giant metal fists on bad guys and sends them flying across the cave. But even with all this, the movie doesn’t forget to show us what could happen to him if things don’t go completely right. At one point a terrorist gets a clear shot and tries to shoot him in the head. He learns the meaning of bullet-proof pretty quickly. And Stark’s friend, Jensen, who has been helping him through all of this, meets his end in some pretty dramatic fashion. Gentry’s telling of his family is pretty sad and deep.

Stark ends his escape with flame throwers and rockets that propel him into the air and away from the camp. He lands in the desert and is rescued by a military search party. And once all of this is over, Stark is back in the states with Pepper Potts, his assistant (played by Gwenyth Paltrow,) calling a press conference to let the world know that his eyes have been opened. He’s no longer going to let his company make weapons that can go directly to terrorists. It’s time to start being accountable. This definitely rub Obadiya the wrong way. It’s the start of where Jeff Bridges as a villain comes out, and boy does this guy play the part well.

But while Tony is battling the board and his decision making on what to do with the weapons, he is also designing and redesigning the suit.  Throughout the movie he keeps making changes and improvements, and the movie really takes its time with showing us how he got the suit to the place and look of what it has today.  There are some great tests of the flight equipment, and a really cool moment where Tony is sticking his hand into a hologram projection of the wrist armor and moving it around. Another one has him get rid of virtual projection parts and throw them into a virtual recycling bin. It’s all pretty cool and a lot of fun to watch.

Tony’s relationship with Obadayia is a big part of this movie. And the story wisely lets the reality of who Obadiya is and what he has done hit us as a slow burn. We see him out in the desert, looking at the remains of the suit that Tony wore when he escaped and we learn a little bit more about his true agenda. Jeff Bridges is such a great actor who unfortunately got pigeon-holed into played parts similar to the Dude, in the Big Lebowski, a little too often. Here, in Iron Man, he is going for something totally different and new, and he is hitting it right out of the park.

This is a superhero movie with brains. It’s not only got the great action, but also the thinking man’s storyline. There’s plenty of creativity spread out in action scenes, going around here, including an aerial dogfight scene where Iron Man takes on two fighter jets that are sent out to get him. And then there’s a cool scene where he goes back to a village in Afghanistan and fights off all the terrorists there. And somehow every moment seems fresh. Every move this guy makes is meant to show off another amazing thing about his suit and it’s capabilities. By doing that, nothing ever feels repetitive or tiresome, and we just keep being more and more impressed.

There are lots of relationships at play here, which is to be expected in an origin story. And most of them are pretty entertaining. Obadiya and Tony have sort of a father-son relationship, (until they don’t.) and Tony and his military best friend, Rhodey (Jim Rhodes, played by Terrence Howard,) have a lot of humorous banter back and forth. Even the story with Pepper Potts takes its time to develop their relationship and explain how it evolves. This movie doesn’t overload us on characters, (notice that John Favreaus’s Happy, the driver, is barely in this movie,) and yet the ones it does give us are just the right amount to get the job done and feel good about it.

While the best thing about Iron Man is the way that it takes its time to develop the suit and show us all of the trail and error in making it,  the action and characters are pretty great too. This is the movie where we really get a sense of the layout of Tony’s cliffside mansion. This is the movie where we see the ins and outs of him putting on the suit, (that level of detail is never seen again in any of the other films.) And this is definitely the movie where we go deep inside his character and the levels of regret he has, in a way that Marvel movies did not come anywhere close to again until Black Panther. It’s one hell of a film.