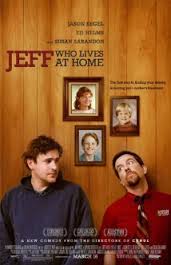 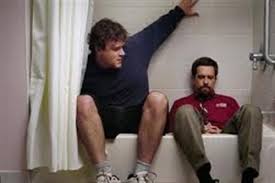 Pretty fresh and original, this movie starts out great, but then gets more and more routine as it goes on.

This is a clever film where there are three different stories that come together at various times. The thing that’s so great is that each story works on it’s own. In fact, the movie is strongest before any of the three plotlines unite. It all works because of the humor element, where the main character, Jeff, believes that everything happens for a reason. He takes little things that happen to him and sees them to be signs of what he needs to do. This guy is on a mission to make sense of it all, and some unexpected surprises come across his path while he is pursuing that mission. It’s creative and charming, but unfortunately the ending wraps things up too neatly. Up until that point, however, the movie is fantastic.

Jeff, who lives at home, is surprisingly fresh. I say surprisingly because of the cast involved, and because it looks as if this would be the usual kind of black comedy. Jason Segal comes out of the Judd Apatow funny camp, and while he sometimes makes good movies (forgetting Sarah marshal), none of them ever feels all that creative. The same can be said of Ed Helms, whose attempt to go solo without the wolf pack from the hangover films, was Cedar Rapids, a movie that was mediocre at best.

But Jeff, who lives at home, is something different. It’s an indie film about one unique character and where things end up taking him. That character is Jeff (segal), a stoner who lives with his mom (Sharon, played by Susan Sarandon), and doesn’t work. Jeff’s mom leaves for her job one morning and gives him only one direction. Get the shingle on her closet fixed. And Jeff plans on doing this until life takes him in some unexpected directions.

It starts that morning, when Jeff gets a call asking for someone named Kevin. Jeff insists that there is no Kevin who lives there and that the guy has the wrong number, but the guy doesn’t believe him. At the end of the phone call, Jeff thinks there was some meaning to all of that. Especially when he heads out to do what his mom asked him and ends up riding the bus behind a guy who has a jersey that says, “Kevin” for a name. Jeff decides to follow this guy off the bus, and see where it leads him.

While this is happening, we start to learn about another story. It’s the story of Jeff’s brother, Pat (Ed Helms). Pat has a nice home and wife (Linda, played by Judy Greer.) our introduction to him is pretty funny. He starts by making his wife breakfast, just the way she likes it. When she asks what the occasion is, Pat tells her there is no occasion and he just wanted to do something nice. They sit down and that’s when he tells her what he’s after, but he says it as if it just occurred to him. As if this whole breakfast thing wasn’t part of a bigger plan.

And what Pat is after, is his wife’s approval to buy a new Porsche. She does not approve. The catch is that he already bought it. So as she’s saying how she thinks it’s a bad idea, and is not on board, he takes out the keys to show her. What a disaster. This guy is conniving and dishonest, and it’s a hell of an introduction scene. This is both funny and uncomfortable in a great black comedy kind of way.

Going back to Jeff, we see him sitting on the side of a basketball court, watching Kevin play in a game. When one of the players gets injured, Jeff steps in to replace him and joins Kevin’s team. The two of them are unstoppable together, passing back and forth, and playing as if they are the only two on the court. The game ends, Jeff, and Kevin go to get a drink of water together. This is when they finally talk and a few things happen that leave Jeff wandering around on his own.

It’s as he’s stumbling away that Jeff runs into his brother, Pat, who can’t wait to show off his new Porsche. Jeff jumps in and Pat starts flooring it, trying to both scare and impress his brother. All Jeff wants is for the car to stop, and it isn’t long before he gets exactly that. Pat slams into a tree and then has to deal with the elderly couple whose house the tree was on. It’s while all this is happening, that Jeff and then Pat notices Linda at a nearby gas station with another man.

The movie starts by telling the two stories of Jeff and Pat, and running these stories parallel to each other. But there is also a third story, and that is the story of their mother, Sharon. She sits behind a desk at work, chatting on instant messenger and getting propositioned by a secret admirer. By including this third story, when Jeff and Pat’s stories come together and join into one, we still of Sharon’s story to cut back to.

Jeff and Pat’s story has now become about the two of them following Pat’s wife around as she goes on what seems like a date, with another man. At one point, the couple goes and sits down at a restaurant and Pat sends Jeff in to sit in the booth behind them and listen in on their conversation. It’s a pretty hilarious moment, especially when a waiter comes over to Jeff and he has to whisper so as not to have his voice heard by Pat’s wife. Only now the waiter can’t hear Jeff and it becomes a problem.

This whole thing is very catchy, creative, and fun, and it carries on that way for a long time. I really like that the movie doesn’t pull any cheap punches by making things not what they look like, so that you feel cheated at the end. Instead, the movie catches us off guard in other ways, like when in the middle of their chase and pursuit of this couple have an affair, Jeff spots a truck with the name “Kevin’s flowers,” on it. He takes this as a sign and immediately goes after the truck, leaving Pat and everything they are doing, behind. This is all great stuff, but by the time we reach an ending, things get a little too neat and simple. Movies with different stories always feel like they have to tie everything together at the end, and this movie would have been stronger didn’t feel a need to do that.