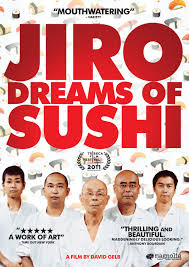 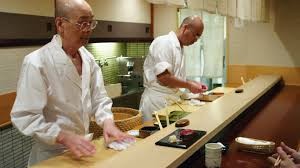 This is an interesting documentary about skill, but it is little more than a unique slice of life, and doesn’t exactly tell a story.

This is a movie about a man and his restaurant. It’s a documentary, so that means it’s more about the process than about the story. There is no real conflict, for example, and that’s the kind fo thing that a good movie needs. Still, this man has wisdom and philosophy and it’s interesting hearing from both him and his employees about the way they do things and why. Jiro, the star of the film, is a man in his eighties, and the parts of this movie that chronicle either his life or that of his sons, are the most compelling, because they actually feel like the pieces of a story and not just the steps of a process.

Jiro Dreams of Sushi is a movie about a unique chef at an unusual restaurant in Tokyo, Japan. Jiro is in his eighties and is a man who refuses to retire. He loves making sushi so much that he plans to be here, at the restaurant, for as long as he is physically able. Here’s a man who is so passionate about what he is doing that he actually dreams about sushi. And yet, he doesn’t do it for fame or money, or even for his children. Jiro does this simply because he loves it.

That explains his tiny restaurant, when clearly his business is so well-known that he could have opened up a bigger place long ago, if he so wanted. The place where he works is on the ground floor of a mall and only fits ten people, all of them sitting at the bar. This restaurant is so small and well-known that you need a reservation a month in advance just to get in. And that’s exactly how Jiro likes it. Small and intimate so that he can get to know the customers and feel like he has a hand in everything that goes on at his place. Of course, we learn many other reasons for him running his business this way, later on, such as that Jiro studies his customers as they eat at his bar.

The movie takes us behind the craft as much as it can, and yet it still feels like there is something lacking. Maybe it’s that we strive to hear about a secret ingredient or secret technique and never actually get it. Instead, we see where Jiro gets the food from and hear his philosophies on the blending of rice and fish. Regarding the different components that he uses in his sushi, Jiro gets his seafood from a local market. He actually has specific vendors at the market who work for him, each one having only a single specialty. So, for example, he has one shrimp guy, and one salmon guy and so on. Each of these men has come to develop a relationship of trust with Jiro so that he knows he is getting the best from them at all times.

Jiro has two sons and both of them are in the business. We learn a lot about their story, such as how both of them wanted to go to college, only Jiro wouldn’t let them. Instead, he encouraged them to come work for him at his restaurant, and that’s exactly what happened. The movie never asks them if they have any regrets, or thoughts about being something else and what might have been. Instead, it tells about how long they have been working for Jiro, and how one son is poised to take over after Jiro leaves the restaurant.

That son is the eldest. It is a tradition in Japan for the eldest son to take over for his father, and knowing that, the younger son decided to leave the restaurant and open up his own place. He had Jiro’s blessing, having trained under his father for years and years, but at the same time, Jiro told him he could not come back. This is some philosiphy that Jiro believes about the way we, as a society, treat our children today. He believes we give them a safety net by telling them if things don’t work out, then they can always come back home. To Jiro, telling something like this to our youth is setting them up for failure. Instead, when his son left to open up a restaurant of his own, Jiro told him, “you have no home to come back to.”

This is something that Jiro learned himself, when he was young, and he left home when he was very small. The age when he left is somewhere between seven and ten, and it’s because his father was a drunk, and did not take care of him very well. Because of this, Jiro believes he developed backbone and became the tough person he is, but at the same time, he resents his father for being this way, and never went to the man’s funeral.

Getting back to the restaurant, we watch each vendor who works for Jiro at the market, separately. The man who picks out the tuna is particularly interesting, because there are all of these giant fish hauled in and displayed, and the vendor must pick out only one each day. In order to do this, he digs out a little piece from those he is strongly considering and then looks at that piece closely by using a flashlight to examine it. According to this man, only one tuna can be the best of the bunch, and that’s the one he wants to find.

There’s a lot of skill that we learn about at the restaurant. One of the little tricks they do includes massaging the octopus for a while so that when it is served it is soft, instead of rubbery. Another trick is that Jiro and his employees memorize the seating chart after their customers sit down each night. They memorize the order of men and women, and this is important because Jiro serves different amounts of food to each person, depending on gender. He has figured out the exact right amount to serve each person and so he and his employees go in the back, memorize the seating chart, and based on that figure out how much they will be serving.

Jiro also studies the people while they are eating. He does this so that he can learn their styles. For example, if somebody is eating with their left hand, then the next time Jiro serves sushi to this person he makes sure to put the plate down on their left side. There is no question, this guy is disciplined and tought, and he expects the people who work for him to be the same. In fact, these days Jiro does very little work in the kitchen other than supervising. He claims it all comes from him, though, since he is the one who trained everyone who works there, and taught them to use his style. Jiro even has a rule about when to let apprentices start. He makes them handle a super hot towel, and it is not until these people have mastered how to handle it and serve the towel to customers, that Jiro lets them go anywhere near the fish.

Jiro Dreams of Sushi is definitely an interesting movie, but it also feels a little repetitive. After all, there is no story here, and this is simply the filming of a restaurant, a chef, and hearing about his technique. There have been movies about restaurants (Chef, Burnt), and those always make sure to develop a story to go along with the cooking technique. But this is a documentary and as such, it is more about the process than it is about how this whole things got started and came to be. Still, most of the content in this film is pretty worthwhile. When it starts talking about the environment, the movie feels preachy and like it is trying to be something that it is not. During those moments it talks about how fisherman are catching the fish too small and not letting them grown and how these fish need ten years to grow to full size. On the one hand it sounds nice, but then you realize Jiro just wants them to grow and be left alone so that they can get bigger, and so that he can get them, cook them, and serve them then. Still, most of the movie doesn’t preach like this and instead is about the man and his skill. It’s tiring at times, but for the most part it’s pretty entertaining and different.