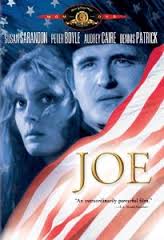 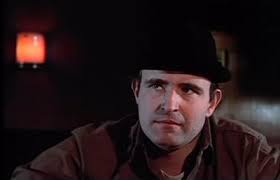 A very unpredictable, unique, and uncomfortable movie, this one is creative and takes you in some very interesting directions.

A fascinating movie, this film prides itself on being unpredictable and unlike anything you’ve ever seen before. That doesn’t mean it’s crazy experimental, such as a movie like Tree Of Life, but only that the story goes in directions that you just don’t see coming. The first few scenes, for example, are about characters who are not the main characters of the movie at all. These characters are important, to be sure, but they will end up being only side players in the grand scheme of things, later on. The story is about a man who kills a drug dealer and then ends up at the mercy of another man who knows his secret. only there’s no blackmail or anything like that at hand. Instead, the film is more about an unlikely friendship that spans social classes, and how far down one character allows himself to be led by another.

Joe is a pretty wild movie. Made in 1970, this movie was part of the most experimental and creative time in filmmaking history. The seventies was the decade of realistic, dark and gritty movies that didn’t sugar coat anything. They went for telling stories that we had never seen before, from taxi driver to one flew over the cuckoo’s nest. Joe is one of those kinds of movies.

At the start of the film we are with a girl and her drug dealer boyfriend. The girl is Melissa (Susan Sarandon in her very first role), and her boyfriend, frank doesn’t exactly treat her well. He shoots up, talks about how much he likes painting, and basically ignores her. Frank plans to do a drug deal where he will be ripping some guy off, selling him something and claiming it is something else. Melissa tries to stop him, but frank goes anyway.

From here, we go to the bar where the drug deal is happening and see frank trying to convince the buyer of how good his product is. Melissa shows up, and frank uses her as proof, telling the guy that she is currently on what he gave her, and just looks at her face. The buyer looks at her and says no thanks. Frank is relentless, though, and after telling Melissa to sit down, he keeps pushing until his product is sold.

All of this is just an introduction to these characters. The funny thing is that they are not our main characters at all. It’s part of why the movie is so unpredictable. At this point it seems like this will be another version of panic in needle park, the al pacino movie about druggies on the upper west side of Manhattan. This movie is far from that, and the opening scenes are really just trying to let us into this world, the underworld of drug dealers and drug users. Our main characters, which we won’t be meeting until later on, our outsiders to this world, just like we are.

Melissa gets really high on the heroin one day and finds herself wondering into a drug store, putting makeup all over her face as if it was war paint and she is just letting the makeup go wherever it pleases. The people who run the store call the cops, and Melissa is taken away to a hospital for treatment. That’s when her parents come in. her father, bill Compton, is the main character of the film. The title Joe refers to the most interesting character in the movie, which he will come across later on.

Compton goes to see his daughter in the hospital and then goes to her apartment to clean it out. He can’t have his daughter living with this drug dealer anymore, and has to get her back under his watch. While there, in the drug dealer’s apartment, frank walks in and he and Compton have words. Compton is in no mood to listen to this and he gets violent with frank to the point of actually killing him. Now this is getting pretty interesting.

Compton goes on the run, leaving the scene, but setting it up to look like a murder involved with drug dealing, before he goes. Once he leaves the place, Compton decides he needs to stop off at a bar to have a drink. He’s not necessarily down on himself or worried for what he did, but more like undecided and ambivalent. Sure, he doesn’t like that he killed someone, but on the other hand this was a drug dealer who was hurting people, and he helped get the guy off the street and make the world a better place.

Compton is so carefree about what he did that when a guy at the bar (Joe) who is going off on a racist rant about black people, mentions killing hippies and druggies, Compton tells him that’s exactly what he just did. At first Joe believes it, but then Compton tells him he’s just joking. Still, Joe likes this guy and buys him a drink. Compton leaves and the next day, when the story of the murder is on the news, Joe catches it on TV and puts the pieces together. He figures it out, finds out where Compton works, and calls him up.

Even now, after all the unpredictable things that have happened (starting with scenes of the drug dealers, then shifting our focus to Compton, and not meeting Joe until much later in the film), we still think we know where this is going. Joe will blackmail Compton, we assume. Not so. This movie avoids any cliché that might be in its path. Instead of blackmail, Joe just wants to be friends with Compton. For Compton and his wife, they don’t really feel like they have a choice. This guy has something over on them, and if he gets angry with them, there’s no telling what he could do. Joe might seem like he has no interest in calling the police, but he still seems unstable and still holds their lives in his hands.

The movie continues to unfold in unexpected directions. There are twists that pop up in the middle of the movie (what Melissa sees at home), and the whole thing leads to a very dark conclusion. It’s amazing how far down the hole the two of these guys end up going. Especially Compton, who basically allows himself to be led by Joe. I like how the mission of the movie also changes, and goes from maintaining a friendship wit Joe (what an uncomfortable scene when Compton and his wife go to Joe’s house one night), to searching for Melissa in the streets of downtown Manhattan. This is a hell of a movie. It doesn’t start out so great, mainly because we have no idea where it’s going and it seems like it will be a much lesser film than it actually turns out to be. As the movie goes on, it becomes more and more interesting with every new turn.