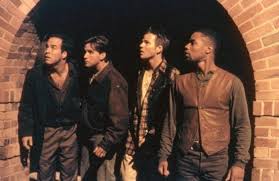 A simple premise leads to a cool adventure movie about four guys trying to escape some murderers in a deserted part of town.

Judgment night is a very simple movie. It’s a film that has no plot revelations or twists of any kind. It’s basically a B movie; guilty pleasure kind of flick that requires little thought and yet keeps you entertained. The way it does that is by providing a threatening force that the boys in this movie are on the run from.

The movie is about a group of friends, out for one night to go see a boxing match. The opening setup, in which main character Frank (Emilio Estevez’s) wife is unhappy with him for going out with these immature guys is a lot like the hangover, with Stu’s girlfriend telling him how immature his buddies are before they come to pick him up. In fact, in both movies the car that comes by to get this guy has someone inside shouting out announcements to the whole neighborhood, proving the girlfriend / wife’s point, that these guys are indeed immature. That’s what the movie wants them to be. A bunch of reckless guys out for a night or weekend of fun.

I like the way that judgment night takes it time to get going. We start out with a sweeping shot over the neighborhood and all of the action in slow motion (what a busy neighborhood block, by the way), and then see Frank with his wife and their newborn baby. After that, Frank and Mike (Cuba Gooding Jr.) board the RV that has come to pick them up. Jeremy Piven’s character, Ray, is behind the wheel, telling a story about how he got the vehicle for the night for free because he swindled the owner into believing he was a big shot of a company.

We start to see the relationships between the characters early on. So John, for example, the fourth member of the group, played by Stephen Dorf, the least experienced actor of the bunch, is setup before we even meet him. As he is pulling his car up on the street, we hear the other guys talk about him and his relationship with older brother Frank. Then once they get on the highway and have a problem with a guy who won’t let them cut into his lane, we get to see a little more. John is the hothead tough guy who will jump at the chance to kick some ass, even if it’s not the smartest move.

Things certainly change in that department by the end of the picture, as the stakes get a lot more serious. But for the purposes of setting up the characters, all of this works. Frank is the responsible one who pulls John away and Mike is the one who thinks John should have kicked that guy’s ass and Frank should have let him. “What happened to the old Frank,” he asks his buddy, while reminding him that he’s not John’s father.

The problems start when the guys take a detour off the highway in order to make it to the main event of the boxing match. They end up in a deserted neighborhood with nothing but homeless guys drinking on the streets. It’s dark out and quiet, and there doesn’t appear to be anyone to ask directions to. That’s when the RV runs over someone, or so the guys think. They get out to check on the situation and find a body on the ground.

They bring the guy back into their RV and see that he has been shot. Ray is the guy who pretends the phone is dead so that he doesn’t have to call the police to get this guy help. He’s been drinking and driving and doesn’t want to put himself at risk here. He doesn’t even want the guys to get out of the RV to check on whether he ran over someone or not.

It isn’t long before a bunch of local killers grab the guy out of the rave and shoot him point blank. Dennis Leary plays the leader of the bad guys, who is the one that pulls the trigger, and he is fantastic here. He is scary and fast-talking and goes on the Same kind of motor-mouthed rants that he does with his stand up comedy, only here at the end of his rants, he’s killing someone.

Leary’s character, Fallon, is the one who has a bunch of rules and tells the guys working for him, “rule number two, no witnesses.” that means they’re coming after our group of friends, and so the chase of the movie begins. It starts out pretty smart, with the boys blowing up the RV because they realize that it is wedged in an alley and the bad guys won’t be able to follow them. Unfortunately, this is the smartest thing they will do in the entire movie. Later on, for example, there’s a scene where they are being held at gunpoint by cops, and won’t stop laughing, thinking that now they are safe. Maybe instead of laughing, they should be telling the cops about the killers who are out to get them.

There are a lot of holes in this movie and things that don’t quite add up, but there are also a lot of cool scenes. I love the high wire act the boys have to do, for example, to get from one building to another, and all of the camera shots that show them making the climb across. I also like the sewer sequence, where the guys decide to stop running for once and to fight back. There are plenty of inconsistencies, like why the guys don’t actually cover all the entrances into the room they are in, or how the bad guy doesn’t hear Frank moving through the water, but if you just go with it, and try not to think too hard about the logistics of things, this movie is actually fun. I like that it isn’t afraid to kill any of its main characters, and that the bad guy is as much of a character as our heroes. I also like the way Mike and John kind of change roles by the end of the movie. This isn’t by any means a great film, but it is still kind of fun. And it’s also a reminder of a simpler time, the nineties, where a movie like this could be made without having any massive twists or creative plot turns. Sometimes less is more. This movie is one of those examples.