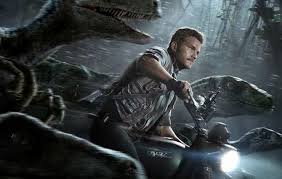 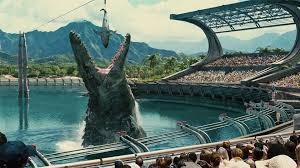 A fun movie that really gets at the spirit of the original, despite a couple of flaws in characters.

This is a fun movie. It is loaded with tributes to the original film, but the most important one of all is the way this movie approaches it’s storytelling. That means waiting to show us the dinosaurs and spending time developing the human characters instead. It also means thinking up the coolest and most creative ideas it can for both how the theme park will work, and for the action sequences. The characters are all cliches, but it doesn’t matter because everything that surrounds them is fantastic. There are three different sets of characters that we are following, all connected with a single story that puts them in three different directions, and it all ends up working out nicely. Plus, the effects and action sequences are absolutely dynamite.

Jurassic World is a pretty cool movie. It’s the first sequel to the 1993 original film, Jurassic Park, to actually get it right. That means amazing special effects dinosaurs, some very cool ideas, and a story that imagines something kind of spectacular. That something is the opening of the park. For the first time we get to see what John Hammond in the original film really envisioned, come to life. This is an operational theme park, and the many ideas this movie features for how that park could actually work, are pretty great.

The fim opens with some close-ups on raptor eggs with little claws breaking through and bursting out. It’s a long way from how the original film began, with a raptor attack while in it’s cage, but the spirit is definitely the same. That spirit is to show us very little and keep us wanting to see more. From the eggs and claws, we quickly move into the character setups. Those begin with two brothers who are being sent to the island for the weekend to stay with their Aunt. She is a big shot at the park, and has promised her sister that she will take care of the boys for a few days. There is a story in the background here, about how the parents are getting a divorce, and I like the way it is kind of kept in the background. Movies that cram too much story in all at once, generally can’t balance them all. Takes The Amazing Spider Man 2 as an example of that. Jurassic World, on the other hand,  knows to choose its battles.

After being introduced to the boys, we then go off to meet their Aunt who works at the park. This is Claire (Bryce Dallas Howard), and she is all business. We learn pretty quickly that she is a number crunching cliche of a character when her boss asks her questions like, “are the dinosaurs happy,” and all she can answer with are statistics. When he says, “You can tell if they’re happy just by looking into their eyes,” you can tell this movie is going for the family friendly vibe. That’s okay though. Not every movie can feature deep and creative characters, and the fact that this film falls into the usual archetypes is no big deal. As long as it doesn’t overdo it, and has plenty of great things to make for it.

Owen, the next character we meet, is another example of the usual stereotype. He’s the good guy, our resident hero of the movie, as played by America’s golden boy Chris Pratt. Last summer Pratt had Guardians of the Galaxy as the number one movie of the summer in the box office. This summer it’s Jurassic World, setting records. He’s a likable guy with an everyman quality. It’s no wonder the country loves him so much. Here, his character, Owen, has  a special relationship with the raptors. He trains them and works with them, and when a handler falls into the raptor pit, it’s Owen who jumps in there to save the day with his knowledge of these dinosaurs and calming methods. Owen has to contend not only with the raptors, but also with a higher authority figure, Hoskins (Vincent D’Onfrio, coming off his amazing turn in the Netflix show Daredevil, season 1.)

Hoskins wants to militarize the raptors. He wants to use them as a weapon on the battlefield. Exactly how that would work is never explained or detailed, and that’s probably a good thing. It’s a pretty dopey idea, and the less they say about it, the better. Owen is strongly opposed to this idea, and doesn’t trust Hoskins. It’s right about this time, that Owen is called in to help out on something by Claire. He goes to look at a new dinosaur they created, called the Androminous Rex, and suddenly they can’t find it. The Androminous Rex has not escaped, but it makes them think it has by using camouflage, and it then tricks some humans into getting into it’s holding cell with it. That’s when all hell breaks loose. Now, the creature actually does get into the park.

Meanwhile, the boys have spent the day exploring the grounds. Most of what we see of this park, we see through their eyes. That includes a really awesome petting zoo where small children can ride on the backs of some of the friendlier dinosaurs, such as triceratops. It also includes a sea creature show where everyone is in the stands watching this giant whale-like monster pop out of the water and eat, and then suddenly the audience’s seats drop, and they are now underground, staring right at the tank, getting a different view of the creature swimming around that they just saw eat. Ideas like this are definitely pretty neat.

Another one is the bubble-like vehicle the boys get into which drives them around some open fields with dinosaurs roaming around. This is meant to be like a sort of safari tour, but it is also clearly a tribute to the original film, where two child siblings got into a car tour and were attacked by a giant T-Rex. These two kids are also attacked. It’s the Androminous that comes after them, flipping their vehicle over and smashing it to pieces. Luckily the boys get out and they find a hidden tent filled with items from the original movie. There’s the jeep, the night-vision goggles, and even a banner that hung up in that earlier film. Talk about tributes and homages, this movie has got them in spades.

The chase with the Androminous and the boys goes on for a while, and at one point they even take a plunge over the edge of a waterfall, right at the moment the creature goes to bite them. None of that is especially original, but what comes next is pretty cool. The Androminous gets into the house of birds aviary. This is a building that houses tons of pterodactyls, and when the Androminous breaks through the wall, those pterodactyls are suddenly set loose. That leads them to attack the theme park. By this point, all visitors have been quarantined and brought into a small secluded area of the park, but the pterodactyls are able to fly in there and attack the people. The woman who was supposed to watch the boys for the day gets it the worst of anyone.

The attacks in this movie are all pretty incredible. There’s no question that this film, just like the original movie, has given thought to what would make for the coolest attacks and action scenes. That’s how we get a person being flipped around by dinosaurs, thrown into the water, and then us going under water to follow what happens to her. It’s also how you get those pterodactyl fights which end up bringing in the gunfire. The climax is especially impressive with the raptors finally getting their day in the sun. Between the chase with the boys in the back of a truck or the dinosaur on dinosaur fights, this movie keeps on delivering.

And that’s really what we want. Sure the characters are weak, but so what? One of the boys is especially annoying as he continuously ogles girls, every chance he gets. But this is something to ignore in order to enjoy the amazing spectacle of the film. It helps that this movie didn’t just CGI everything, and actually used animatronics and other practical effects whenever it could. That includes the moments when raptors have their heads in a certain muzzle-like cage, and also when our characters stumble on a dinosaur who is injured from an attack. The story is basically one long chase once the Androminous Rex gets out, but the action set pieces are creative and thrilling. It all works out to be a pretty fun film.