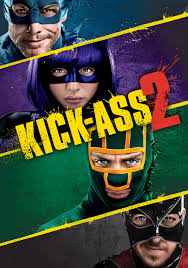 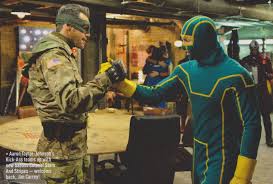 Not nearly as good as the first film, the story is fine, but the humor and action aren’t what they once were.

This movie is watchable and okay, but it doesn’t even hold a candle to the first film. the director has changed and so have all of the elements that made that first movie great. Sure, the basic premise is still there about regular guys who have no super powers yet go out and fight crime, vigilante-style, as if they were superheroes. but the humor doesn’t work here, the action isn’t well choreographed, and the story is repetitive and dull. sometimes the movie surprises us by getting one or more of these things right, but more often than not, we are just watching the same old thing, and not nearly as good as it was the first time around.

Kick Ass 2 is a movie that didn’t need to be made. It’s not that I have a problem with making a sequel to this new superhero film, but that if there isn’t a good story in place, than why make a sequel? Whereas the first film felt very natural and humorous, this follow up film feels forced way more often than it should. Sure there are funny moments, but overall the humor isn’t there. The same can be said of the action scenes. Some of these do work, but a vast majority of them don’t. And for a plot, we just get a lot of back and forth about both Dave and Mindy trying to give up being a superhero.

at the beginning of the movie, Dave has given it up. Now he’s thinking about getting back into shape and putting on the costume again. Mindy starts training him. it takes her over a week to get him ready to hit the streets again. i don’t mind that the movie starts with him being in a transition period where for a while he went without the costume. it explain what he’s been up to all this time. the problem is that the movie continues to go down that path for the duration of the film. every thirty minutes, it’s either mindy trying to give it up, or dave. plenty of superhero movies deal with the idea of leaving the gig behind, and some do it well, (tobey maguire’s spider man 2), and some don’t (the dark knight rises.) Kick ass 2 is one that doesn’t.

for their first fight since getting back in shape, dave and mindy (kick ass and hit girl, respectively) take on a bunch of drug dealers. kick ass goes up to them and starts trouble, and he gets a few good hits in, but ultimately they kick his butt. that’s when mindy shows up and kicks their butts. there’s nothing here that we haven’t seen before in the last movie. the action is extremely violent, and there’s nothing wrong with that (the last film had the same thing), but the choreography is lacking. so is the idea that hit girl would wait so long to jump in, and let kick ass take such a beating before she did.

while news of kick ass back out on the streets spreads, chris d’amico, (christopher mintz-plasse) whose father died in the last film, is plotting vengeance. his mother doesn’t want to hear any of it, and he accidentally kills her. all of this is pretty funny. in fact, whatever humor is in this movie comes from this character. not that he’s so hilarious or anything, but at least he adds a little spark to the film, trying to be a big badass and getting called out on it over and over again. like when he trains against a skilled fighter in the ring, and shouts out “street rules, bitch,” as he sucker punches the guy from behind, only to get destroyed immediately after that.

the real plot of this movie, or distinction to separate it from the first film, is that now instead of one or two superheroes fighting off a bunch of gangsters, this time it’s a whole giant team of superheroes. like the avengers, only without any powers. and there’s also a team of supervillains. for the heroes, kick ass is first approached by a guy named doctor gravity (donald faison, from tv’s scrubs). i like that kick ass asks him if his bat really does anything that defies gravity, and doctor gravity responds, “of course not.” the one thing these movies have going over every other superhero movie out there, is that the heroes are completey normal in every way. they don’t have any superpowers at all. in a sense this is kind of like the movie mystery men, only set in highschool.

since her father passed away in the last film, mindy has been living with marcus, the former partner of her dad. marcus is played by morris chestnut (a different actor than the guy who played him in the first film), and he has a major problem with what mindy does for fun. he can’t have her being a vigilante out on the streets. marcus talks with her about this and convinces mindy to give it up, and so she makes him a promise, and does.

that brings us to the portion of the film where mindy tries to be normal. the movie becomes mean girls for a good chunk of time. mindy joins up with the popular kids who try to give her a make over and bring her into their club. on the one hand, i wanted more about the highschool world, out of this movie, but on the other, this was all about mindy, and all just a retread on mean girls. it wasn’t even trying to be it’s own thing at all. i wanted to see dave in highschool, just like the first film showed us. that movie took the time to explain his life, including his crush on his teacher and computer habits at home. in this movie, it’s all about mindy, and her story isn’t that interesting at all.

doctor gravity leads kick ass to a team of heroes, led by a guy named colonel stars and stripes, (played by jim carrey, the big name of this film.) last movie it was nicholas cage. like in that film, carrey plays the leader of the team who designates jobs and seems in control. it’s nice to see the familiar face, but carrey doesn’t really do a whole lot with the part, other than putting on an accent.

and while kick ass is joining up with a team, red mist, (now called the mother f-er,) is doing the same thing. he’s making his own team, with his henchman, john leguizamo, doing the scout work. they get a bunch of guys, like the black boxer who beat him in the ring, named black death, an out of shape, short, fat guy, named the tumor, and the female dolph lundreon, mother russia.

the action finally starts to pick up in the later portions of the movie. there’s a great scene, for example, where mindy attacks the guys in a van and then rides on one of them as he drags on the ground, being pulled by the van. the climactic fights are also kind of cool, but all of this comes too late. the real problem with kick ass 2 is that the story is all over the place. some of the elements work (the teams of good guys and teams of bad guys), but it’s more like a checklist of ideas to include. the overall story has to be about both kick ass and hit girl trying to give up being a superhero, because they’ve got nothing else to do. it’s pretty weak. the humor and action really needed to be spiced up in order to compare to the first film.