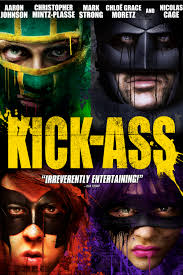 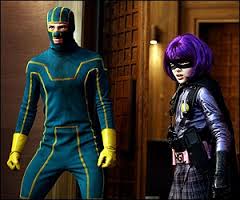 A clever superhero film that takes its subject seriously by setting it in the real world of comic geeks and violence.

Kick ass is smart movie that’s a lot of fun! Its director Matthew Vaughn has had the idea to make a superhero film for some time now and with kick ass he shows us that he can do it right. For Vaughn, it’s his third film, continuing his streak after layer cake and stardust. One of those was a pure gangster movie, the other an absolute fantasy. With Kick Ass, Vaughn is able to bridge the genres together and to do it with a superhero movie, the type of film he’s been aching to do for almost a decade. Before this film, Vaughn was all set to direct X-Men 3. But then he had to drop out. And now, he is currently making the new x-men movie, X-Men first class. So clearly superhero movies are in this guy’s blood. And he shows it off with the success o Kick Ass.

The movie is about a teenager in high school who wonders why people don’t really try to be superheroes. at the start of the film we see somebody who really is trying, decked out in a bird costume, standing on the roof of a building. he jumps off and then plummets to the ground, slamming into a car, and dying. that basically sets the tone of the movie, that being a superhero is just impractical. and when the teenager, dave (aaron johnson), brings up the idea to his friends, they tell him somebody who tried to be a superhero would just end up getting his ass kicked.

and that’s exactly what happens. dave orders the parts for a costume, puts it together, and becomes kick ass. he approaches two tough guy car jackers and ends up getting stabbed in the stomach and then run over by a car. and this is director matthew vaughn, grounding his movie in reality. now dave goes to the hospital and apparently gets metal plates put into him everywhere. there’s a scene where he’s looking over his x rays, and all of the metal inside of him, and says, “I look like wolverine.”

And this is how dave is able to become kick ass and is able to fight. his friends test his new skeleton out by slamming him with things such as a cafeteria food tray and watching how he feels no pain. in this way, vaughn is able to give us a plausible explanation for how this teenager can become a fighter, while still keeping to the realistic idea that anyone normal who tried this would end up getting badly hurt.

at this point, it’s time to bring in some other characters. from the very start of the film, vaughn has been setting up a father-daughter relationship between nicholas cage and his daughter Mindy. in their first scene together, they stand on a rooftop and he shoots her in the chest while she wears a bullet proof vest. he’s a strange dad and he teaches his daughter all about high tech weaponry and fighting skills.

there’s also a gangster boss, which is where vaughn’s previous experience comes in. that gang boss is played by the great mark strong, an actor who has been on the rise for about a year now, and appeared in a handful of films, all very memorable. he was in rock n rolla and body of lies about two years back. then last year, he really turned into the go to villain actor playing bad guys in both sherlock holmes and robin hood. now, playing another villain in kick ass, it is his fifth outing in recent years, and he is just as good as always. in kick ass, for the first time in all five of those films, he adapts an american accent and handles it flawlessly.

As the movie goes on, dave meets up with two other superheroes as they come to save him when he goes after a bunch of drug dealers. those two other heroes are big daddy (who looks like batman without the ears and cape), and hit girl. they are played by cage and his daughter. i like that this scene is another one where kick ass would not have been able to survive without the help. again, this is vaughn treating his subject seriously.

hit girl turns out to be a lot of fun. she has a dirty mouth, which i know a lot of people had a hard time with because she is such a young actress, but it’s all part of the comedy. and she doesn’t overdo it the way an actor might in a kevin smith movie. her dialogue isn’t meant to be cursing for the sake of punchlines. it’s cursing because that’s who her character is, take it or leave it. and boy does she know how to kick ass. she wields all kinds of weapons and has some pretty terrific fighting skills. and we are meant to believe this is possible because of who her father is and what he must have taught her.

The movie continues on with mark strong needing a solution to these superheroes and sending his son out to help. that son is played by chris mintz plasse of superbad fame, and here he becomes the superhero known as red mist. this new plot line puts all three of our other heroes into danger as big daddy and his daughter are not expecting the betrayal that’s coming their way.

kick ass, as a whole, is not great. but it’s close. it is certainly a lot of fun with an interesting plot, and good action. I suppose part of the reason it doesn’t completely cross into the realm of greatness is because it isn’t all that different from movies we’ve seen before. i like the putting the main character in high school and having multiple scenes that take place there, but that setting is already familiar to the genre from movies like spider man. i think this movie could have used more hanging around the comic book stores, discussing heroes, in an ironic scream, movie within a movie kind of way. and while i liked it’s attempts to take the ideas seriously, that could have been carried further too. yes, they cover their ground with the idea that someone trying this for real would get hurt, but what about all of the little things. having to hide your costume, and people looking at your masked image, listening to clips of your voice, trying to guess who you are? the movie does cover some of these grounds, with ideas like rerouting web addresses to find out where the hero lives, but it just could have gone a little further. I do like that this movie went for an r rating and therefore was able to include bloody violence, lots of cursing, and sex talk. There’s no reason to sugar coat the way teenagers really talk. superbad certainly taught us that. Kick ass is a very good film, but it just doesn’t quite make it into being great.