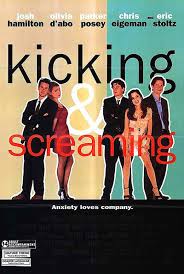 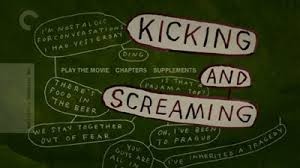 A very funny movie about post-college young adults who don’t know what to do with themselves, but at least know how to have fun with their friends.

Kicking and Screaming is a movie about youth and uncertainty. It’s about the year after college when you don’t really know where your life is going and have to suddenly make some serious decisions. Everybody who goes to college chooses a major and often that major has nothing to do with what you will be doing when the four years are over. All at once then, you find yourself graduating and needing to either make a quick decision or else to take some time off to figure things out. The characters in this movie all take that time off, spending the next six months or so trying to make sense of their lives.

All of this might sound uneasy and troubling, but it’s actually great material for comedy. The comic greats of the last few decades haven’t been guys who have the world at their fingertips, but more like paranoid and nervous men who are filled with theories about what is wrong with the world. Guys like Woody Allen and Albert brooks. The characters in kicking and screaming are younger versions of those actors and the personalities they play over and over again in their movies.

Kicking and Screaming is a title that refers to guys who can’t be dragged away from college and who basically refuse to leave. The only way they can be dragged off is by Kicking and Screaming. And so these four main characters end up staying on the college campus simply because they don’t know what else to do. They mix back in with the student population, going to the same bars, the same dorm rooms for one night stands, and even the same dining halls on the occasion, for meals.

There are four main guys, all friends with each other, who are the characters of this movie. These guys are Grover, max, Otis, and Skippy. Each of them has their own personality and own set of problems and yet they are also very much alike. They have meaningless conversations such as trivia games where one has to slam the table and say, “ding” like on a game show before answering. They have book clubs where they don’t actually read the books. And they search for romantic happiness with the young coeds who might be younger than them, but can still hopefully give them some sort of idea or direction for what to do next with their lives.

The movie opens at a graduation party. It’s the night of their graduation evening. Only a few hours before they were in caps and gowns and now they sit at tables with drinks in their hands, thinking about their futures and feeling miserable. Grover stands by a pool with his girlfriend, Jane, trying to make sense of the news that she will now be going to live in Prague. He tells her that he’s been to Prague, meaning he knows all the trendy things people say about it and what it’s supposed to be all about, and in a metaphorical way he has had that experience and done those sorts of things. He tells her that there’s really no need to actually go there.

Max and Otis meanwhile, sit at a table looking lost and hopeless. That is until Skippy and his girlfriend, Miami (indie film vet Parker poesy) stop by and start asking them trivia questions like to name ten movies with monkeys in them. as max starts to talk to Miami about his misery and pessimistic outlook on his future prospects, Otis answers the question about the monkeys with great enthusiasm, both of them talking over each other and not even realizing it. the contrast in tones is very funny.

Another character we meet at the party is Chet, played by another indie vet, Eric Stolz. He’s a few years older than these guys, but still hangs around them. Chet is the eight year senior character, the guy who never left college and is content to work at a local bar, live near the campus, and continue to take one or two classes every semester. The guys might like him (some more than others), but they certainly don’t want to end up like him.

As the movie goes on, our four characters get involved in different relationships and situations. Grover starts to sleep with freshman girls; only he keeps having flashbacks of Jane, who is now off in Prague. We get to see how the beginning of their relationship unfolded, from their first meeting to the events that led up to their romance. Max, meanwhile, sleeps with Miami, debates over how to break it to Skippy, and then meets a girl of his own in the college dining hall.

All the while, the movie keeps track of time by giving us subtitles that refer to different points in the college semester, such as “midterms” or “last week before Christmas break.” it’s kind of funny to set these titles as the increments of time, considering the characters aren’t really enrolled in school anymore. We watch as Skippy decides to continue to take classes, since he can’t think of anything better to do, and as Otis lands a job at a video store that has outrageously detailed sections for movies. There’s a terminal illness movies section, for example, as well as a dog buddy movies section.

The movie is filled with laughs about who these characters are and what they are doing with themselves. Sometimes it’s simple observational humor like having a song stuck in your head and wanting another song to take it’s spot. Other times, there are actual situations like arguing over a parking spot and then noticing things about the guy you are arguing with. “Don’t anger him. He’d already rather be bow hunting.” there’s a great scene where a character finds something in his drink, and another where one of the guys has his father come to visit and start talking to his son about his sex life. All of this makes for some very awkward and uncomfortable funny moments. the movie is written and directed by Noah Baumbach who went on to make other excellent comedies like The Squid And The Whale and Greenberg. those movies are much darker, black comedies. Kicking and Screaming feels more like the films of Whit Stillman. Such as metropolitan and the last days of disco. Movies about preppy youngsters with no direction. The characters are easy to relate to and the situations are a lot of fun.