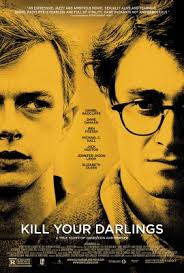 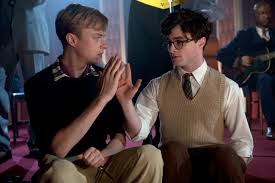 The atmosphere and cast are both pretty good, but this movie has a weak story and is extremely uneventful until it’s ending.

Kill Your Darlings is not what it should have been. this should have been a murder mystery set at a university. maybe there could have been an angle to it where you didn’t know which of the students did the murder or something like that. Instead, the movie doesn’t even get to the murder until the final portions of the film. It makes sure to tell you everything that’s going to happen, though, with an opening scene flash forward that gives way more away than it should. The story here is extremely weak and uneventful. The atmosphere of these kids going out to jazz clubs is pretty cool, but without a story the movie really doesn’t amount to very much.

Kill Your Darlings is ridiculous. the movie has all the potential and building blocks to be something great and it completely squanders them. It’s about some upper class elite students at Columbia University who drink fine wine and write poetry. Clearly the movie wanted to be Dead Poets Society meets School Ties, only this movie doesn’t have half the story that either one of those films did. You can’t just have college kids standing around reciting poetry and think that counts for a story.

My biggest problem, straight off the bat, is the way the movie does not use Ben Foster. This kid isn’t always in the best movies, but he does always steal the show. Alpha Dog, 3:10 to yuma, Contraband, The Mechanic. Foster is continually the best thing about each of the movies he appears in. not with Kill Your Darlings. The movie barely gives him two lines of dialogue. granted he’s playing william burroughs, a real life quiet drug addict, but if you have ben foster in your movie, you use him. you don’t waste him.

The main problem is that for nearly the entire film, nothing happens. it opens with Allen Ginsberg (daniel radcliffe) going to visit his friend lucien (dane dehaan) in prison. we saw a flash of dehaan in a lake with a dead body in his arms, right before this, and now we’re watching the aftermath. i understand that the movie has to show us something exciting at the start, to get our attention, and to let us know that something interesting will be coming later on down the line, but with this, it shows too much.

we didn’t need two different scenes of flash forwards. we didn’t need to see lucien in the river with the body, because that alone told us that it was true. he was going to kill this man. instead, a smarter move might have been to open the film up with d lucien being provoked and lashing out. something that didn’t give us a final consequence and instead made us want to see the rest of the scene. the way the movie opens, we want to see what led up to this…the attack and the murder, but other than that, we know everything.

the main problem with the movie, however, is not it’s opening. plenty of movies begin with flashes of what will come at the end. it’s a cheap way to get the audience in their seats at the beginning and let them know what they have to look forward to. the better movies open with something exciting that is unrelated to the ending. like the james bond films. the only exception is when you get a quick flash of something at the beginning and don’t have any idea what it is or what it means. like in the usual suspects or a perfect world. those opening images don’t actually mean anything to the audience until they come upon them again at the ending.

the main problem with the movie is that it is dull and lifeless and uneventful. we meet ginsberg while he is living at home with his parents (david cross and jennifer jason leigh), in new jersey. his mom is insane and the dad keeps her locked up in the house instead of sending her off to an asylum, at the request of his son. ginsberg gets accepted to columbia, and not long after he leaves the house and moves there, the dad does have the mom committed.

at columbia, ginsberg is taken with the rebelliousness of this one student, lucien. the boy acts like he does not have a care in the world and is all about the party. lucien stands up on a library table when ginsberg is touring the building, and starts shouting things. ginsberg can’t help but smile. he meets lucien in person soon after, and starts hanging out with him immediately. lucien is one of those kids like matt damon in school ties, who comes from an upper class family that wants to write a paycheck for him and send him away to somewhere that will get him out of their hair. he is the wildcard friend to ginsberg’s normal guy.

the two of them attend parties and talk about poetry and that is the extent of everything that happens in the first half of the film. sure, we meet other characters, like david (dexter’s michael c. hall), but the meetings are uninspiring. lucien takes ginsberg to a party at david’s house. we later learn that lucien and david have a strang romantic relationship and the lucien wants out of it. why, then, is he taking ginsberg to david’s house?

there are two good scenes in the movie, and this film even manages to botch them up, by putting them right next to each other, back to back, instead of spreading out the fun. the first of these scenes has ginsberg pickup a girl in the library and get involved with her while hiding between the shelves. it’s a creepy scene with lucien standing there, watching the whole time. and then there’s a scene of the two boys, as well as two others, breaking into the library at night to pull of a prank in the display case.

it takes a very long time just to get to those two scenes. and after that, it’s right back to the same kind of thing until we finally get to the murder. there is some cool music and atmosphere in this movie, as the characters go to some old 194os jazz clubs in new york city, but the story is weak. with the focus clearly on the look of the film instead of on what is happening, the result is pretty awful. story is everything, and this movie somehow managed to forget that.