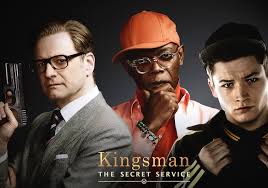 Great action, energy, and pacing, this movie does have some misteps in the second half, but still manages to be a lot of fun the whole way through.

This is an absolutely great movie up until it’s final third. That means for most of the way through, everything is done right. There’s a wonderful introduction to all of the characters, and the organization. Then there’s the recruiting process which includes lots of tests and challenges. Our hero is a bit of a rebel named Eggsy, who doesn’t mind antagonizing the local hoodlum bullies who occupy the pubs. In one memorable sequence, he steals the ring leaders car and speeds down the street backwards while being chased by a cop. Everything is going smoothly here, until the plot of the villain is revealed and it is just a little too over-the-top and unrealistic. Now, it’s not as if this movie keeply blunders in its final third or anything, it’s just that those scenes aren’t quite up to the same caliber as the ones that proceded it. Still, the movie on the whole, is really a lot of fun.

Kingsmen: The Secret Service is a Matthew Vaughn movie. That’s enough right there to tell you that it’s got to be a pretty good film. This guy is like Tarantino or the Coen Brothers in that he has yet to make a movie that was anything but great. He’s a director of talent and quality, and his movies are always both interesting and entertaining. Vaughn debuted as a director with Layer Cake, his strongest film yet. He followed that with Stardust, Kick Ass, and X-Men: First Class. Each one of these movies was fun in a uniquely creative in a visionary way. The same can be said of Kingsmen.

Most of the movie is terrific. There are some problems with the story, but they all come in the final third. Before that, the first two-thirds of the film are really interesting and fun. The movie opens with a great Dire Straits song that plays as an enemy building is attacked.  We stay far outside while watching explosions go off in the windows. It’s all handled very comically, with bombs blasting, gunfire sounding, rocks falling off the building with every new explosion, then flying up onto the screen and turning into the opening credits. This is all happening while the camera keeps zooming into the building and the words fly out at the screen. It’s a hell of an opening.

The sequence leads to a flashback in time where the Kingsmen infiltrate an enemy organization. Only they miss something, and a bomb ends up getting detonated right in front of them. One of the Kingsmen throws himself on top of the guy with the bomb and is killed. He sacrifices himself for the others, which include Harry Hart (Colin Firth.)

From here we move into the present day, with a professor being kidnapped and brought to a secluded location in a mountain lodge. He is surrounded by captors who await the arrival of their boss when a mysterious guest shows up at the door. It’s one the Kingsmen who busts in and kills them all. He’s about to set the professor free when a strange woman appears from the shadows with blades on her feet and ends up kicking the man in such a way that it slices him in half. Not long after this, her boss, Valentine (Samuel L. Jackson) arrives at the lodge.

This is all setup and introductory material that gets us warmed up. The main character of the movie is a boy who hasn’t even appeared yet, other then in a flashback where Hart came to visit the boy’s widowed mother after the death of his father. This chracter is Eggsy, and he’s just a small child when Hart gives him a necklace with an unusual symbol on it. Eggsy’s father was the man who sacrificed himself at the start of the film by jumping onto the bomb. We go away for a few years and then come back to see Eggsy as a young adult, hanging out with bad company. His mom doesn’t exactly choose the best companions either. She is shacking up with guys who treat her terribly, and Eggsy steals the car of the son of the man that his mom is seeing. This leads to a very fun police chase around the streets that ultimately ends with Eggsy being thrown in jail.

He dials the number that his mother told him about, as a secret line with a password for people who can help him out of a jam. Hart shows up to get him out and sits down at the local pub with him for a drink. When the guy whose car he stole approaches, Hart stands up, walks to the door, locks it, and then lets the guy and his friends have it. He unleashes hell on them by way of an umbrella-turned-weapon. This thing acts as a bullet-proof sheild and then by turning the umbrella handle, suddenly becomes a stun gun.

All of this happens in the first third of the movie. The second segment is about Eggsy being recruited and trying out for the Kingsmen. It’s a rigorous process filled with cool tests. It’s Eggsy and a bunch of other recruits, all around his age. The first test comes when their bedroom is flooded all the way up to the ceiling while they are asleep. It’s Eggsy who figures out a way to escape this deadly situation.

Other tests include a cool skydiving scene where one of the recruits does not have a parachute, and then the raising and training of a small puppy. All the while that Eggsy is going through these exercises, Valentine continues to kidnap more people of great social status, such as the professor. Pretty soon we are in the final third of the movie and Valentine is ready to put his plan into action. He’s been building towards it the whole movie with us never really knowing exactly what he was up to, and only seeing clues.

The final third of the movie reveals his evil plan, and it’s a little too juvenile and ridiculous for this movie. The plan involves some free cell phones that Valentine has given out. He’s a wealthy tycoon, and has nationally declared that everyone on earth will get a free phone. It is through these phones that Valentine is able to send waves which can control people and cause them to turn into violent and ferocious killers. They suddenly start attacking each other. These guys are like mindless animals, not too far removed from zombies. The only difference is that they aren’t trying to eat people, but just to kill them.

I didn’t care for the zombie-like plan. It seemed a little too silly and unrealistic. There’s a church scene where it all is suddenly unspooled on us at once, amidst some incredible levels of vioence, and it goes a little too far with the brutality (without explanation, at the time of it happening.) It gets worse. When Valentine really puts his plan into action, mothers are trying to kill their own babies, and when heads explode, they do so in such a way that it’s like watching fireworks. All of this happens in the final portions of the movie. Now, none of it is terrible or enough to derail the film from the momentum it had, but at the same time, this material just isn’t up to the same level and standard as the rest of the movie. Vaughn is a director with a very playful energy and tone, and here it just gets a little too campy and off-track. Still, so much of the movie is loaded up with fantastic action and great ideas, that these few missed steps towards the end are hardly enough to criticize the film. There’s a lot to like with this one, and Vaughn definitely has another winner on his hands.