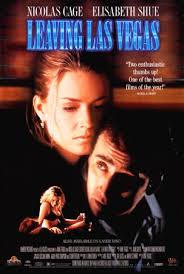 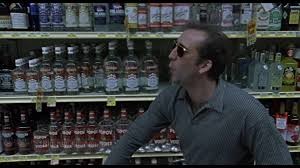 It might be different and artistic, but this movie is only moderately interesting, as very little happens in the plot.

This movie is about a man who goes to Vegas to drink himself to death, and the prostitute who likes him because he’s not interested in her for sex. That’s definitely something different, (although the prostitute angle is a little pretty woman-like), but as far as the main character goes, we’ve never really seen anything like this before. Aside from that, the acting is superb, and we are very interested in these characters. The problem is that the movie never tells us enough or gives us enough. We want to know about Ben (Nicholas Cage), the man who came out to Vegas with this intention, and what led him to do that. We want to know about sera (Elizabeth Shue), and how she became a prostitute. The movie gives us no answers. It’s an alright film that definitely holds our attention for a while, but in the second half, with no new answers or information coming in, the movie just kind of lingers on.

Leaving Las Vegas is definitely interesting, but it doesn’t quite have enough of a story to keep our attention the whole way through. It’s interesting because it is different. We’ve never really seen a movie like this before, where the star is killing himself by drinking, and is drunk in nearly every scene of the film. When he’s not drunk, like when he just wakes up in the morning, he has the shakes and can’t control himself, until he gets a few drinks in him. Then he’s back to normal.

this man is Ben Sanderson, played by Nicholas Cage in a role he won an Oscar for. Cage is good here, no question. This might be the last movie of his career where he really did solid acting, before going over the top in every single movie afterwards, from The Rock to Con Air to face off to the thousands of ridiculously awful films he made after those. In Leaving Las Vegas, he takes on a tough acting assignment and he makes it through with great success.

When we meet Ben, he is in a restaurant in Los Angeles, going up to the table of a man he used to work with, asking for money. The man gives him some quick cash and asks Ben never to approach him again. Ben decides to cut his losses and move to Vegas. What better town to be in to drink himself to death.

It’s on this drunken drive down the strip that Ben nearly runs over a prostitute. This woman is sera (played by Elizabeth Shue), and she is angry with Ben for nearly running her over. He gets out of the car and runs after her. She is beautiful, of course, but it’s more than that. This is the first woman who has looked his way and given any attention to him in a while. He starts offering her tons of money to spend the night with him, and when he takes the money out, she tells him to give it to her in his car.

They go to his seedy motel room, and Ben is not really interested in sex. Instead, he wants to spend the night with her and talk. This is something different for sera, and she likes it. We see her on an interview, with the camera, the next day, and she talks about how Ben made her feel something different than she ever felt before. I guess that, the way she was the first woman who really looked at Ben, something similar happened with the way he treated her. He was the first man who wasn’t interested her in order to have sex or make money.

When Sera goes back to her pimp, he beats her for staying out all night. She goes back to work, goes at it harder than usual, has a great night, and goes to see the pimp again. This time sera is All excited about how much money she made and the pimp doesn’t want to see her. things have gone bad with him, and he knows there are men coming to get him. He tells Sera to leave and never come back.

That’s when Sera goes to find Ben, and the two of them spend the rest of the movie with each other. Nothing much really happens after that, and the movie is only about halfway in. there is a scene of them going at it by the side of the pool of the motel where they are staying, which ends with Ben crashing through the glass table next to him. He goes up to the room and Sera is left down there to talk to the woman who owns the place. That woman kicks her out.

She goes back to the place where she has been living for a while and has all her stuff, and the couple that owns that place shows up at her door. They are also kicking her out. And here lies the problem with this movie… too much happens without explanation. Sure we know why sera got kicked out of that other place, after the broken table incident, but what about this place? Why were the men coming to kill the pimp? One more scene could have explained that a little bit and made it much more interesting.

We also learn very little about Ben, sera, and the events that might have led them to be where they are. For Ben, we get quick flashes to seeing that at one point he had a wife and child. That’s it. We don’t get anything to help us connect those images with where he is now. Was there an accident? Did they leave him because of his drinking? With Sera, we get even less. How did she become a prostitute, and why? We get one flashback on Ben, to show him at his old job, being called into the boss’ office, and told that they were letting him go. We needed more scenes like this to help us understand the story. Leaving Las Vegas is good because it is different, but there is just too much left out, and not enough happening in the second half of the movie to really keep us interested.