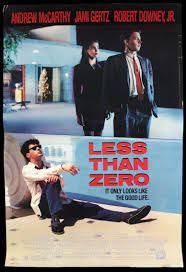 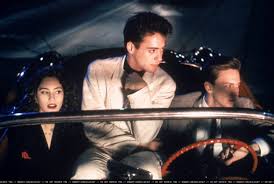 A very eighties take on over-privileged youth and drug culture, told from the point of view of a friend returning to town.

Less Than Zero is an interesting movie. It’s got the same kind of plot that we’ve seen a ton of times before, mostly in TV shows. That plot is about a friend who is out of control on drugs and into some bad things with some very bad people. The friend is Julian, played by Robert Downey Jr. when he was a young man. The star of the movie is Andrew McCarthy, playing clay, a nice guy who left town after his high school graduation.

Clay had plans to leave with his girlfriend, Blair, played by Jami Gertz. The two of them were going to go off to college together in New York and leave L.A. Culture behind them. Only Blair didn’t go. In a fabulous black and white flashback scene somewhat early on in the movie, we see the moment when she told clay about how her plans changed. She basically got cold feet and told him that this life of leaving everything behind and going out there into the world just wasn’t for her.

And so clay went off by himself, and he and Blair broke up. And apparently right before he left, he found his best friend, Julian, and his now ex, Blair, sleeping together. Clay left and that was the end of that, or so he thought. Now, with plans to go back to L.A. For the holiday break from college, clay gets a call from Blair. She wants to know if he’s coming home.

He does, and he finds out pretty quickly that the reason why she wanted him back was not because she wanted to see him. It was because she thought he could help with Julian. In the six months since high school graduation, Julian has plummeted straight downhill. He has become a drug addict, living on the streets, and actually works for a drug dealer, although the nature of what he does for this dealer (played by the always creepy James Spader) is not revealed until the end of the movie.

Clay now starts up his relationship again with Blair, who apparently was never serious with Julian. The two of them just got it on a few times, probably because they both felt terrible about losing their best friend to new York. They consoled in each other and by being with each other it were probably like still being with their friend, a little bit. Holding onto someone that he had a connection with too. That’s my guess about the whole thing. The movie never even tries to explain it and it should. At the very least, clay should question Blair or question Julian about why they betrayed him the way they did. But he doesn’t. I suppose the reason is because there is too much else going on with Julian’s problem. Still, you would think before getting back with Blair, Clay would want some answers about the past.

While clay is the nice guy, boring main character, this movie really belongs to Julian. I guess you could say that’s how all movies with an eccentric supporting side character are, but it is never more true than here. Downey Jr. has presence and it’s felt in every one of his scenes. That’s not easy when he’s playing a character who is completely irresponsible and who we don’t really care for. But he’s the son of a very wealthy father who has turned his back on him after spoiling the boy in every way possible. As a graduation gift, for example, his father got Julian a record contract and set him up as a music producer. Nice present.

The movie is cloaked in eighties atmosphere and that’s pretty cool. It has a lot going on with music and costumes and set design. And the tone of these wealthy families who don’t know anything about raising kids is really set, not just with Julian. There’s a great dinner scene at clay’s house where he sits around the table with his large family and nobody is really saying anything to each other. It’s awkward and strange.

The casting in this movie is one of the reasons for its success. Robert Downey Jr. is clearly the breakthrough here, performing his heart out. It’s interesting that in real life Downey Jr. was a druggie who spent years either getting high or getting arrested. Clearly this role was very close to the path he would follow not too long after it. But he is a wonderful actor, as proved by his 2008 movies Tropic Thunder and Iron Man. Those movies were meant to be fun, and not something taken seriously and yet tropic thunder is the one the academy awards recognized and iron man is a favorite among critics.

Aside from Downey Jr., James spader plays the villain and that’s one thing he’s great at. He’s always creepy and weird and that’s just the way he likes it, from Sex, Lies, and Videotape, to two days in the valley, to crash. This guy chooses interesting roles and does a nice job as the evil drug dealer who has a hold on Julian, here. And then there are eighties icons Andrew McCarthy and Jamie Gertz. Whatever happened to McCarthy, I’m not sure, but for a while he was appearing in all kinds of eighties classics from pretty in pink to weekend at berries. And gertz had the lost boys out the same year as this movie, and then went on to eventually star in the TV show still standing.

The movie was based on the Brett Easton Ellis novel and nobody knows depravity quite like him. From American psycho to the rules of attraction, his novels turned movies are always interesting. This film is no exception. Yes, there are plenty of plot points that we’ve seen before, but there are also a number of fresh ideas here. I love how when Clay is looking for Julian, for example, he finds his friend sitting on a cliff overlooking the beach shore. This is where Julian lives when he has nowhere else to go. I also love the very dark turns this movie takes in it’s final act, first seeing what Julian has been up to and then watching what happens to him. It’s not a great movie, but it is certainly interesting and well made.