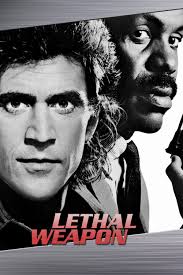 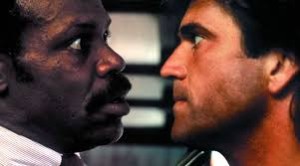 The first movie of the buddy cop series that spawned more sequels than any other, this movie is fun and entertaining, but it also at times gets pretty dopey.

An entertaining buddy cop movie, this might be one the main films that started the genre (following 48 Hours, about five years earlier), but it doesn’t have nearly as many classic moments as one might expect. This is no die hard. Instead, what works are the angles surrounding a mystery storyline. what doesn’t work are all of the scenes that feel like they are right out of every other buddy cop movie in the world. still, this movie was probably the first film to use them, so you can’t hold that against it. The ending scenes might be the most flawed in the movie, but that still doesn’t take away from the whole thing being a lot of fun. And stars Gibson and Glover have real chemistry together, which goes a long way towards building this single movie into a franchise.

Lethal Weapon is an okay movie. This is hardly the great, classic buddy cop action movie that one would expect, and yet, somehow it donned more sequels than any other film in the genre. That’s probably because of Mel Gibson’s rising star as well as the ability of the series to introduce a new famous actor to the world in each movie. The second one gave us Joe pesci. Then he carried over to the third one where we got rene Russo. And they both carried over to the fourth with Chris Rock. Still, the first one, which features none of these extra players, remains the most classic of the bunch, and yet it really isn’t anything all that spectacular.

The movie is sometimes fun and comedic, sometimes kind of goofy. What works about it is the mystery angle. That gets started right at the opening, as we see a girl out on her balcony, having a cigarette. She decides to jump to her death and we follow her falling body all the way to the street. From there, we join a man named Murtaugh (Danny Glover) who is celebrating a birthday with his family. Murtaugh gets the call about the girl and suddenly the celebration is over. The call doesn’t come from his captain; it comes from the father of the girl, who is murtaugh’s friend.

We cut away from the story of the girl and the detective to meet another police officer. This one is Riggs (Mel Gibson), and he’s working undercover trying to close out a drug deal. The scene takes place at a tree farm around Christmastime, and it all goes sour pretty fast and turns into a gunfight. Riggs battles his way out of it, of course, and rattles off some one-liners, and the takeaway is supposed to be that he’s crazy, but really he just seems like a damn good undercover cop.

We join murtaugh at the precinct, where Riggs has been brought in. the captain and his assistant talk a little bit about Riggs and we learn that his wife recently died and he is severely depressed. Some people even believe that he is suicidal. Murtaugh has no idea who the man is, and must assume that he’s a criminal brought in there for questioning, because when Riggs pulls out a gun, all hell breaks loose. Murtaugh runs at him in an attempt to tackle Riggs to the ground and Riggs moves away, sending murtaugh crashing down. That’s when murtaugh learns that this is his new partner.

The first thing these two do together is going talk a guy out of committing suicide. The man is high up on a building, ready to jump. Riggs gets up on the roof of the building next to the guy and tells him that he wants to commit suicide as well. When the guy isn’t looking Riggs handcuffs himself to the man. Than he takes a leap off the building, pulling the guy down with him. Together they land on a giant trampoline-like net, held out by firefighters.

So far, none of these scenes has been all that great. The tree farm shoot-out scene was really just a regular action scene, and the suicide sequence has been done so many times before that it got parodied in the buddy-cop comedy the other guys. When the boys go to see a known drug dealer, they get shot at, and suddenly they are back into the case.

They put an idea together about the prostitute who murtaugh spoke to outside of the building where the girl jumped to her death. The prostitute was a witness who saw it all. Murtaugh reasons that maybe she was the one who actually pushed the girl and then ran outside to be a witness and be right there for when the cops arrived, looking for someone who saw the whole thing.

The guys go out to the prostitute’s house and the place blows up as they are walking up to it. So many clichés here that at the time of this movie were not yet clichés at all. This movie might actually be the film that pioneered these classic moments. The guys figure out after the explosion that maybe the girl’s father is the reason why she was killed. I’m not sure how all the clues fit together in order them to make one connection after another, but once they reason that the mystery really begins with whatever the father was into, the bad guys suddenly come out of the woodwork.

The villains are now front and center, starting with them showing up in a helicopter to shoot the father as he is talking to the cops. Soon these villains are coming after our two heroes for fear that the father might have told them something. The kidnap Riggs and torture him using a sponge with electricity running through it, under water. There are a couple of street chases and it all leads to a fistfight on the lawn of detective murtaugh.

That climactic fight might be the dopiest thing about this movie. All these cops are standing around watching as Riggs goes toe to toe with this notorious killer, as if it’s a sporting match. Then there’s also the moment that leads up to the fight where Riggs and Murtaugh drive a car through Murtaugh’s house in order to flush the bad guy (Gary Busey) out. Still, aside from a couple of these lousy moments at the end, the movie is pretty entertaining. By now we’ve seen just about everything that happens here in tons of other cop movies, only here’s when these clichés first appeared on film. I wish the mystery story had a little more substance regarding the clues and how they put it all together, but the movie is still okay, even if one piece doesn’t always clearly connect to the next. Gibson and Glover definitely have chemistry and repore, and it shows in nearly every scene.