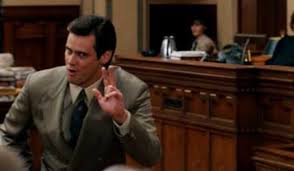 A movie about a lawyer who can’t tell any lies for a single day, it’s funny at times, but for the most part this is pretty routine and predictable stuff.

An okay movie that is probably more for kids than adults, and is certainly not on the level of Jim Carey’s better films (Ace Ventura, Truman show, Bruce Almighty, eternal sunshine). This movie does have a plot that gives Carey lots of opportunities to be silly and outrageous, but it’s also not all that smart. He’s a lawyer who for exactly one day cannot tell a lie. That means he has to be brutally honest about everything, even if it is insulting. The premise makes for some funny situations, but also a lot of clichéd and expected ones. This is not a great movie, but it’s certainly good for a few laughs.

Liar Liar is a very average movie. It’s Jim Carrey being funny and crazy and doing it all in a courtroom. The premise is certainly good, about a lawyer who can’t lie. This isn’t anything brilliant, but it’s the kind of plot that works out perfectly for a Jim Carrey vehicle. It fits his style so perfectly, in fact, that they basically remade this movie when Carrey starred in the film yes man, about a guy who can’t say no. I never saw that movie, but something tells me liar is a lot better.

Liar Liar comes from a time when Jim Carrey was big news. he had Ace Ventura, the mask, and dumb and dumber. this was like Adam Sandler back when he was making Billy Madison and Happy Gilmore. the movies that kick start a comedians movie career tend to be the best movies that comedian ever makes. While Carrey had other occasional good films over the years, such as Bruce Almighty and the Truman show, it wasn’t long before that of other actors such as Will Ferrell was replacing his routine.

Liar Liar might have a good plot for Jim Carrey, but it’s still nothing special. A father has no time for his kid and lies about why he can’t be there for the boy. This is cats in the cradle stuff, and you can tell from the very beginning that this guy will change and learn to appreciate his son by the end. The father promises to take his kid out at night and instead ends up cancelling in order to spend the night in bed with the hot boss. All that is fine, but how does the son know that the father is lying when he gives his son an excuse.

The son is so frustrated with his father that he makes a birthday wish, which is that for the next day his father can’t tell a lie. Why is it only for one day? Why not a week, month, year, or even forever? It’s one day so that we can have a quick simple movie about a single day from morning until night of the man telling only the truth. Of course things are sped up to fit the formula, so the court case that Fletcher reed (Carrey) is a lawyer in has to start that day (he meets his client in the morning), and also end that day. Pretty ridiculous, but this movie isn’t meant to be taken seriously.

The fun of the movie isn’t really the court case, but more watching Fletcher walk around in the world and have to tell the truth everywhere he goes. Lots of this takes place around the office with him calling people out on having bad hair or a giant zit. His secretary certainly has fun with it, getting Fletcher to tell her the truth about a bonus she was supposed to get. And then there’s Fletcher outside of the office, telling a woman in the elevator that she has gigantic melons.

The problem is that most of this story gets kind of tiresome as it goes on. At a certain point, there’s nothing new they can do with it, and so they bring Fletcher into situations where instead of slapping him (like the woman in the elevator did), the other characters go along with him. That’s what happens when Fletcher enters a boardroom meeting and starts shouting insults at each man in the room. The other men start laughing at the insults and taking them as jokes and everyone just goes along with it.

There are two major storylines on display here. The first is that of Fletcher the family man. this is the story that includes his ex-wife, Moira Tierney, and his son, max. The other story is that of Fletcher the lawyer and his court case with client Jennifer Tilly. In the first story, Fletcher is a terrible father and Tierney is seeing another man (played by Cary Elwes.) When Elwes has to idea to move to another state and ask Tierney and max to come with him, a new problem arises.

This story isn’t anything special, with the romance between Tierney and Elwes being awkward, just to fit the plot needs. We get one of those clichéd scenes where one of them says I love you and the other one doesn’t return it. Elwes isn’t a bad guy and at least the movie never sunk to that level of vilifying him, the way some other movies do with the new boyfriend, but even still, he isn’t much fun either.

And the Jennifer Tilly court case couldn’t be less interesting. It’s a child custody case where Tilly wants the kids just because she wants to hurt her husband. She’s a terrible person, and Fletcher represents her, trying to prove that she deserves custody of these kids. When the court case comes down to numbers and age, it just becomes so uninteresting. Maybe real trials do get resolved by bringing up numbers and statistics and things like that, but on screen, it is very uncinematic.

Liar Liar is an okay movie. On the positive side, Jim Carey is giving it his all and this is a movie and a character that really work well with what Carey can do. There are plenty of opportunities here for the comedian to go off and do ridiculous faces and voices. He does one thing called, “the claw,” which is a sort of game he plays with his son, and is kind of cool. But the problem is the plot. Aside from its simple premise about the one-day curse, there really isn’t anything else going on with this movie. The film might be funny at times, but that’s not enough to make it a worthwhile movie. Especially since all of its ideas are so simple-minded.