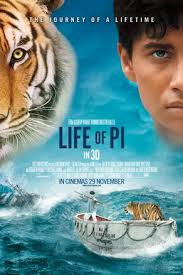 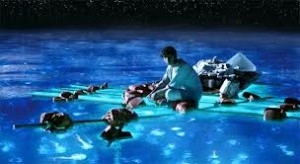 Slumdog Millionarire meets Cast Away, this movie is loaded with beautiful imagery and humorous storytelling.

This is a very cool movie. Just the visuals alone are spectacular, but then there’s the story, which provides a mix of drama and comedy. Like Slumdog Millionaire, this is about a boy in India, who we get to see at all different ages in his life. The boy ends up in a shipwreck that leaves him on a rowboat with a tiger. It’s an adventure movie that manages to find twists and surprises as it goes on. At times the movie does feel long, but overall there is just so much to like about this film. Even the stories about the boy growing up, long before the shipwreck, are fun because of their clever ways of using humor to present ideas.

Life Of Pi is an interesting film. there’s no doubt about it that it calls to mind Slumdog Millionaire, with the way that the stars are all from India, and living in India at the start of the film, and also how we see the main character at all different stages and ages of his life. we see him played by at least three different actors, just like in Slumdog. I think the guy who is the adult lead, Irrfan Khan, was even in Slumdog, in a significant role, playing the police inspector. but the connections really end once the character has gone to see and the real story begins.

Instead of Slumdog, this movie becomes more like cast away. The main character survives on a lifeboat and has only animals as his friends, keeping him company. I suppose that’s as much like the first half of I am legend as it is the tom hanks movie, with will smith, in legend, having his only conversations with a dog. but that movie took place in a deserted New York City. Life Of Pi has it’s own unique thing going for it. it’s about being out at sea. this kid, Pi Patel, doesn’t have an island to roam around on like tom hanks had in cast away. All he’s got is a lifeboat.

The movie starts out with an adult, (Irrfan khan) telling his story to a reporter who has come all the way up to Canada to see him. Someone named Mamma G told the reporter, that this man Pi (the adult version of the kid character), has an amazing story. And the reporter comes to hear it. The two men sit down and the story begins.

It starts off with Pi as a young boy, going to school, and having to deal with people making fun of his name. his real name is Pissine, which sounds a lot like Pissing. And because of this similarity in sound, there are tons of jokes that are made about him, sometimes even unintentionally, like when teachers do it. So Pissine changes his name to Pi.

We also get some stories about how his parents owned a zoo in India. There is one memorable story in particular, about how young Pi once held out a steak to a tiger in its cage without realizing or caring or believing that the tiger might bite his arm off. And so the father had to teach him a lesson, and did so by bringing out a small, helpless goat for the tiger to devour. The father made Pi watch the whole thing.

While all of this is interesting, from the story of his name (which throws some humor into the film), To the story of the tiger, none of it really adds to or progresses the story. The same can be said of a little story about one of his uncle’s who was a good swimmer, and had a big upper half to his body, but very small and skinny legs. All funny, but none of it really relevant. The main story, of course, is about this young boy being trapped and stranded out at sea. he and his family decide to move to Canada and take a ship across the ocean to get there. They take all of their animals with them, locked up in cages.

During the voyage, there is a terrible storm, and all kinds of things happen. Waves crash onto the deck of the ship. The ship turns over. And Pi manages to get into a lifeboat and survive. How, exactly, it all worked out, I’m still not sure. I know that Gerard Depardu was on board as one of the workers, and he tried to escape in a lifeboat as well, but didn’t quite make it. And I know that somehow the animal got loose and were all over the place. A zebra even tried to jump into the lifeboat with Pi.

As it turns out, a number of the animals did make it after all. The trailers will show you only a boy and a tiger, but the truth is he has a little more company than that. only none of them are humans. There’s a hyena, a zebra, and an ape as well. And apparently each one of them is very important, even if we don’t learn about their significance until long after they are gone. The movie now becomes about what happens to each of them.

After the animals are gone, all except for the tiger, named Richard Parker, it is just Pi and this wild beast. the two of them work things out together and Pi creates systems to make Richard Parker understand him. The scenes out at sea are great. they are always interesting, but eventually they start to feel tiresome. After all, there is only so much that can happen out there.

The final quarter of the film or so has some interesting surprises up its sleeve. There’s an island with a mystery to it, and then another surprise that calls into question everything we’ve heard about the story so far. I love that some major elements of the story were saved for the end of the film. This movie really is great. some of the images are just out of this world, with the use of lights and nature combined in ways that would make filmmaker Terrence Malick jealous (he’s a guy who puts nature images ahead of story.) Life Of Pi might be a little long at times, but it is fantastic in about ten other ways. The story is great and so are the surprises. The imagery is absolutely amazing. This is a very good and unique film.