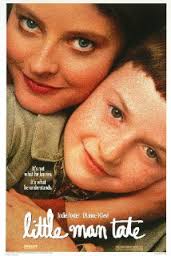 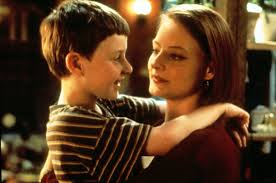 A smart and interesting movie about a boy genius and the options that are presented to him.

Little Man Tate is the movie of a young boy who is gifted to the point of being a genius. His name is Fred Tate and the movie opens with his voice over explaining how he is different than other kids. We see him drawing a masterpiece of a picture on the ground outside while other boys are playing ball. Fred talks about the boy he admires most, a kid who is athletic and popular and always picked first to be on the team in whatever game the kids are playing. Fred wishes he were popular like that.

He lives at home with his mom, Dede, played by Jodie Foster, and has no idea who his father was. Dede takes good care of her son and treats him well, but she’s not especially bright, which is a wonder that Fred turned out the way he did. At a certain point in this movie, Fred goes away from her and then when he returns he has clearly passed her in intelligence.

Early on, we see Fred in school, packed into a classroom with a bunch of kids who could care less about what their teacher is trying to show them. Fred doesn’t care much either, but for him, the reason is because he already knows it. He’s bored. When the teacher calls on him, he knows the answer even better than she does. When she asks about numbers that are divisible by two, he gives her an answer she was never expecting. And when she asks him to come up to the piano to play a duet with her, he plays the song backwards, making it very hard and uncomfortable for her to sing along with it.

Clearly Fred is bored and looking for something more stimulating in his life. And he finds it when a woman named Jane (Diane Wiest) and her assistant, Garth (David Hyde Pierce) start looking into him. They work with gifted children and take them around the country touring and trying out different programs. In some cases, the children even sit in on college classes.

It takes some convincing before Fred is able to go with Jane and I like that the movie takes it’s time with this. Dede is not the kind of mother who is going to just send her kid away with a stranger, and she needs to figure out what will really be the best thing for the boy. She’s also no push over, and from the very first meeting with Jane, Dede gets suspicious of this woman and the way she might be able to mentally take her son away from her,

But Fred wants to go. He starts reading books about the math magician; a kid who wears a cape around and can do crazy things with numbers in his head. Fred sits on the balcony reading about this kid, fixated on the book, and all Dede can say about it is, “dorky looking cape.” she doesn’t even get the title of the book right, calling it the math magician, and of course Fred corrects her.

So Fred goes off to live with Jane and her crew, and the journey of the movie begins. They enter into some competitions and have some small adventures. At one point Fred confront the boy who has been acting like a jerk, and they come to terms with each other and actually become friends. That leads to them going horseback riding together.

Soon Fred is being offered to go to college. This will mean spending the entire summer with Jane, and Dede again lets Fred make the choice. But first she offers him a summer down in Florida, staying at a hotel with it’s own pool and a trip to Disney world to boot. Fred responds that he’s already been to Disney world, with Jane, and so he goes off to college. Dede doesn’t like this one bit, but she wants it to be Fred’s choice, and so she lets him go.

At college, Fred becomes friends with an upper class man, played by harry conic jar. and everything seems to be going great until Fred oversteps his boundary. That’s when Fred realizes there really are restrictions in life, and that friendship is the most important thing. He starts thinking hard on the situation he’s in and how it’s not really a “kid” situation. When his only choices for friends are college students, something is wrong.

This movie gets pretty intense as it goes on. There’s a fantastic TV. Show climax that is completely built up by everything that came before it. Fred is a great character and the movie knows how to really get inside his head. The voice-overs are fantastic, helping to give us the perspective of a boy who is divided and being pulled from two different sides. This movie was Jodie Foster’s directing debut and she really did a nice job. She chose a film that was something different and quirky and got a lot of mileage out of its creativity. The movie ends up being a lot of fun.