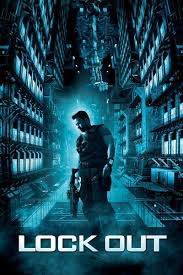 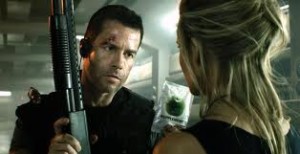 It’s Escape From New York meets Daylight and Cube, only this movie starts out really cool and then becomes completely dull and routine after that.

Lockout is a movie that takes borrowed pieces from other films and mixes them together into one. That would be okay, if the movie did this successfully and found ways to add to what has been seen before. Unfortunarely, this movie doesn’t. There really is nothing original or creative here. The premise is escape from new york in outer space. Our anti-hero has to infiltrate a prison in order to get the presiden’t daughter back. That’s been done before, but it’s okay, so long as you make the stuff on the space station prison unique. But this movie doesn’t make the effort to do that. So instead of having each room be it’s own environment or something crazy like that, this movie is really just about getting the girl to safety. The humor is okay, but the plot is way too routine.

Lockout is a very generic movie. It certainly looks as if it would be that way, and so the fact that it turns out to be the same old thing should really come as no surprise. That being said, there is some real talent involved here that goes beyond the usual Jason Statham, B movie kind of action film, that this one ends up looking and feeling like throughout it’s duration. The talent is both behind the scenes and in front of them. behind the scenes there is Luc Besson who wrote and produced the movie. Too bad he didn’t direct it too. Besson is the Guy who made the professional (a modern classic) and the fifth element. Then he sort of gave up directing for about two decades in order to produce.

In front of the camera is Guy Pearce, who is hardly the usual choice for a movie like this. That’s a good thing. Pearce is a very talented actor who brings real charm to his roles. he also tends to be a good decision maker when it comes to picking movies. now to be sure, Pearce has been in some real stinkers, from Ravenous (a movie about cannibals) to the remake of The Time Machine. But he’s also the Guy who starred in Memento and L.A. Confidential. He found his way into the king’s speech and had fun with an out there role in Iron Man 3. Basically he’s an enjoyable actor, and not a B movie star, so the fact that he’s in this film definitely seems odd.

The movie is absolutely a futuristic version of escape from New York. Now that movie is set in the future as well, only there are some huge differences to the landscape in both films. escape from New York is set in a desolate, barren wasteland. It’s the dystopian future where everything is gritty and falling apart. that’s the future of movies like The Road Warrior and Brazil. Lockout, on the other hand, is set in outer space, in a future of technology and advanced weaponry. This is the nice, shining future we hope to one-day live in. Other than the settings, however, the plot between the two movies are essentially the same.

That plot is about the President’s daughter being kidnapped and one man being sent in to get her. Where is he being sent? A maximum-security prison. And of course, this guy who they’re sending in is hardly one of their own Special Forces men. They would never use one of their own Guys for that, right? Instead, it’s an anti-hero who is on the outs with the government, and who they are basically giving a last chance to instead of just executing him. They don’t care if this guy lives or dies. If he can bring out the president’s daughter safely, however, they will give him a full pardon. all of that is exactly the same in both films.

The movie starts to become a different kind of film once the Pearce character (named Snow), gets on board the space station. It’s a floating prison, just like in Men In Black III, and once snow makes it there, he spends the rest of the movie running down different corridors, trying to rescue the girl. This is where the movie starts to feel like Daylight meets Cube. Every scene is in another room or hallway. The opportunity to do something cool with that concept was there. Cube certainly showed us the levels of creativity this plot could involve, by making each room special in its own way. Here, in Lockout, however, each room pretty much looks the same.

The movie begins with a cool action scene that is told as a flashback. Snow has been arrested for a murder and is sitting in an interrogation room telling the story of how he came to be there. His story involves some very elaborate motorcycle chases and fights. At one point he jumps from the room of one building right at the glass window of another building, only unlike the Bourne movie version of this scene, the glass doesn’t break and he just bounces off of it and slides down the wall. This kind of stuff is clever and fun.

But that level of creative action is really only in this opening scene. After that, it pretty much disappears from the film. so does the guy running the interrogation, played by the great Peter Stormare. This is a fun, loveable actor, and for the few scenes he’s in, he definitely adds something to. but he’s not really in the mid-portions of the film. For one thing, he doesn’t go to the space station, so once snow goes there, and his story separates from Stormare, (the guy in charge), we go our separate ways from that character as well. It would have been cool if Stormare did actually go to the station with snow, and just waited on a dock in the spaceship, for snow to return. In that case, every now and again we could have checked in with his character and seen what he was up to.

Instead of Stormare, the other featured actor in this movie, besides Guy Pearce, is Maggie Grace. This is the girl from televisions “Lost” and from the Liam Neesan thriller taken. she’s very attractive, but nothing special as an actress. For one thing, her character is pretty naive and stupid at the start of the film when she allows herself to get pretty close to the prisoners without ever thinking that something could go wrong. And of course it does.

The action isn’t anything special in this movie, and that’s the biggest downer of all. especially after that first scene which was a lot of fun and offered tremendous promise. The first action scene of a movie should never be the best. It should be great, but the best should be saved for the end. Casino Royale was a wonderful movie, but its one flaw was that it’s opening action scene, at the construction site, was better than any scene, which followed. With Lockout, it’s the same thing. There is nothing interesting or creative or new about any of the action that takes place on board the ship.

With a story that feels very generic and action that is nothing special or new, this movie really doesn’t have a lot to offer. I suppose a positive is that at least it doesn’t go for dopey laughs, and the humor that comes from snow tends to be pretty decent. nothing great, but good enough for a movie of this caliber. the most disappointing thing about the movie is that it’s Luc Besson making it. this Guy might never achieve the greatness that he once had with the professional, again, but the best way to try is to make movies that are different. Making a film that feels like a combination of familiar classics is a big mistake. The movie isn’t bad, but it certainly isn’t unique.