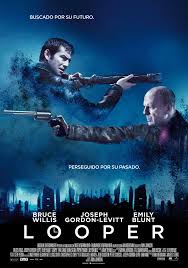 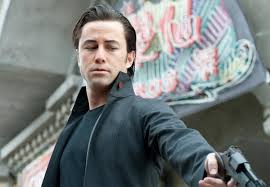 This is a clever and interesting film loaded up with futuristic ideas. It’s about assassins in the present time who work with the mob from the future. The mob sends people back in time who they want killed and the Loopers do the killing. That’s the setup, but the real plot gets started when Joe (Joseph Gordon Levitt), finds that the person he is supposed to kill is actually himself. The future version of his character is played by Bruce Willis, and he goes on the run. Now Joe has to find his future self, while also being hunted by the other assassins. What we end up getting is a movie that keeps building in where it takes us, so that the second half of the movie is completely different than the first half, and involves a totally new revelation that changes the course of the plot. There are a few missteps every now and again, but for the most part, this movie is very good.

Looper is a cool movie. There’s no question about it. It’s futuristic sci-fi stuff and it’s also a film noir style mystery. The combination of those two genres usually leads to good things. From Blade Runner to Brazil to twelve monkeys to Gattica, these two genres tend to fit nicely together. The film noir is a sub-genre of action movies, and so most films on that list usually qualify as action films as well. Looper is no exception.

The movie was written and directed by Rian Johnson, the guy who made brick, back in 2007. brick was a cool movie. It was a strange take on classic film noir archetypes, put into a high school setting. The movie was very creative and showed real talent and ambition. clearly this filmmaker had potential. Looper is the first opportunity for Rian Johnson to really cash in on that potential. To do that, he brought the star of Brick, Joseph Gordon-Levitt, over to this movie too. In fact, Looper was actually written with Levitt in mind, and the main character is even named Joe.

The premise of the movie is that it’s the future and Loopers are assassins who kill people that are from even further into the future. Those people are sent back into time to be killed in the past by Loopers. It might all sound confusing, but it’s actually not. Basically you can’t kill people in the future, because there is too much DNA evidence or something, to dispose of bodies. So the mob has found a way to send bodies back into the past and have them killed there. They’ve found a loophole (possible where the title for the movie originated.)

That’s just the initial setup. the log line of the movie, of course, is what if you were one of these Loopers and the target that was sent back was sent back from the future for you to kill turned out to be you? Would you pull the trigger and kill your future self? But there’s actually a lot more to it than that, since the movie isn’t really about Joe’s choice. Instead, it’s more about the rules of this futuristic world, and a character called the rainmaker, who everyone keeps saying is in the future “closing all the loops,” (killing all the Looper assassins off.)

The reason why the assassins are called Loopers is because sometimes the mob wants to terminate a contract with a Looper, in which case they send the future version of the person back in time to be killed. Why don’t they just send this person to another Looper to do the job? Wouldn’t that make things much less problematic? So this is called closing your loop, and when it happens, the target arrives with gold strapped to his back. this represents the final payment by the mob.

as if all of this wasn’t enough, there are also telekinetic abilities (TK) going on here. the idea there is that a small percent of the population has acquired the TK mutant gene and can move things with their mind, although it’s really just coins and they can really just levitate them above their hands a little bit. but there’s a reason for all this and it will come up as the film goes on. It’s like they say, if a gun appears in act 1, it better go off in act 3. Same thing here with the telekinetic stuff.

We don’t actually meet the future version of Joe, played by Bruce Willis, until at least a solid thirty minutes into the film. That’s because there is just so much setting up to do. There’s this future world and all of its rules and then there’s the character Joe, and what he does and what his life is like. Also in the first part of the film we watch as Joe’s friend, Seth (Paul Dano), a fellow Looper, tries to outrun the system. This is foreshadowing for what will be happening to Joe later on.

The point of the Seth story is to establish rules, like that if you do something to your past self than it effects your future self. Joe uses this as a clever way to send messages to his future self later on, but we already see that in Seth’s story earlier in the movie. Seth’s story is cool, but the problem is it is just a little too similar to Joe’s story, taking away some of the momentum from what will be happening later on.

One of the coolest parts of the film involves the future Joe appearing in the past without a hood, and then us following the events to figure out why this happened this way (all targets appear wearing hoods). We see it happen, and then we move through the years, all the way up until Bruce Willis is ready to go back in time. Then we see why he ended up without a hood on. We also get to see a couple of scenes that happened earlier, replayed from a different point of view. This happens for the scene where Willis pops up in the past and escapes, and also for the scene where Joe falls from a fire escape during an apartment getaway. These are some of the coolest moments in the movie.

Looper is definitely cool, and it’s mainly because of all its ideas. Just look at the motorcycle-like hubber craft some characters ride through the air, or the giant air gun rifles they fire. Despite the ideas however, the movie definitely has some major missteps. One is that the main villain of the film is killed off screen. I was angry when no country for old men did something like that, but here it’s even worse since the character is really our only villain. Another problem is that sometimes the movie just feels kind of slow, when it really shouldn’t. There’s a lot of time spent on the farm in the second half, and not enough spent with villain Jeff Daniels. Another scene to show how bad he was or another action scene somewhere could have really made a difference. Still, there are many cool twists and developments as the film goes on and this movie is definitely smart and creative.