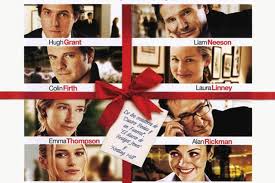 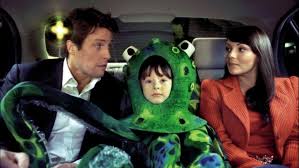 A very funny movie with loads of interesting and clever plot lines that all intersect with each other.

Love, Actually is a movie with so much going on that it’s impossible not to enjoy it. This is a movie loaded up with stories, each one finding it’s own way to be both funny and creative at the same time. The stories do all connect (some of them with stronger connections than others), but that’s hardly the point. What makes the movie work is that every story is both interesting and humorous. Each one of them is also about a relationships, and these relationships are as different as can be. From the guy who is in love with the wife of his best friend to the woman who realizes that she needs to choose the love she has for her brother over her own needs, to the prime minister who needs to sacrifice a political ally because it gets in the way of his romantic feelings for someone, there is just so much going on. Some of the stories are pure comedy and nothing more (Colin going to America or the stand-ins on the movie set,) and that works too, really helping make the moments that are dramatic feel necessary in order to help balance everything out. The film moves very smoothly, and is a whole lot of fun.

Love, Actually is like a Robert Altman movie (Short Cuts being his best example), meets an English romance movie, meets a Christmas movie. It’s all of those things in one, told by one of the greatest modern day British storyteller’s of film. Richard Curtis. This is the guy who wrote Notting Hill and Four Weddings and a Funeral. With Love Actually, he gets the chance to direct and he pretty much knocks it out of the park. That’s because of the combination of a very talented cast and some extremely well-written material. On top of that, the movie works because of just how many different stories there are and how each one is very interesting and unusual in it’s own way.

Like plenty of other films, this one is indeed a series of short stories that connect. While that formula might be somewhat tiresome, Love, Actually works because each of the stories is very funny and also very creative. There’s the story of Hugh Grant, for example. This man is the new Prime Minister of England, and we meet him for the first time as he is being welcomed into his new home and meets the staff. His story will be about an employee there who he has a crush on, and how he goes out of his way to win her over. Often that means doing things that are unconventional (telling off the American President on national television) or just unwise (going door to door looking for her, going to a children’s play with her, and making out behind the curtain.) Each of these moments is very unexpected and very funny. The Prime Minister even gets a dance scene to the song “Jump” by the Pointer Sisters, which turns out to be a blast when he gets caught in the act.

The Prime Minister’s sister is played by Emma Thompson. This is Karen, an older woman with a husband and two children. She is married to Harry, (Alan Rickman), a hard working boss with a wandering eye. Harry has a bit of a problem. There is a younger woman at work who is constantly flirting with him and he just cannot resist her. Now, most movies would have the two of these characters begin an affair. Love, Actually finds an original way to handle the “cheating” situation and makes it all about a gift. Harry is going to buy this girl a gift, and what it is, and whether his wife will find out about it or not, becomes the big scandal. We even get some terrific cameo moments out of it, like the one where Rowan Atkinson (the actor who played Mr. Bean), shows up in the movie behind the counter of  a department store and just can’t take a hint. Poor Harry wants to get out of the store as fast as possible and Atkinson seems to do everything imaginable to hold him up. The scene is absolutely hilarious.

Karen is good friends with a man who recently lost his wife. This is Daniel, played by Liam Neeson, and his story isn’t so much about him as it is about his son. Daniel’s son is in love with a girl, and seems to be taking it pretty seriously. The first time he tells his father this, Daniel laughs and thinks it’s all pretty cute and funny. But soon he realizes that whether it’s real love or not, it might be exactly what his son needs to help him move on from thinking about his mom. A hobby. Something to be passionate about. The infatuation with this girl turns out to be an obsession with getting good at the drums, in order to impress her. This is one of the stories that is not as strong as the others, especially with it’s corny airport run ending, but what makes it special is the way that Daniel talks to his son. He basically holds nothing back, telling the son things like, “you are screwed,” and “if I meet the right woman, we are gonna shag on every bed in this house, including yours.” This is some awkwardly funny stuff.

Going back to the Harry workplace story with the younger woman who flirts with him all day long, there are a number of other stories that also find their origins and connections at the very same office. There is the story of Laura Linney, the story of Colin, and the story of Mark (Andrew Lincoln from TV’s The Walking Dead), who lets Harry’s company use his art studio for a party. Laura Linney has the strongest connection to the bunch. She plays Sarah, a woman who is infatuated with Karl (Rodrigo Santoro), a man who works there as well. Sarah has words with Harry where he tells her that everyone knows she is in love with Karl, and she really needs to do something about it once and for all.

Sarah does. On the night of the Christmas party, she and Karl hit it off and she ends up inviting him over. Once at her place, Sarah has the great moment of her story, where she goes around the corner, out of Karl’s vision, for just a quick moment, and does a celebritory dance. Then she invites him upstairs to her bedroom. But there’s a problem. She gets a call about her brother who is in a mental institution, and has to run out to take care of him. There’s even a dramtic scene with the brother where he tries to hit her. This story ends up being sad and uncomfortable, and on the one hand it doesn’t quite fit into place alongside the other stories, but on the other, it definitely adds flavor to the movie. Now all of a sudden everything isn’t about love and happiness and comedy, but there’s also some drama in there too. And as far as the love goes, the Sarah story ends up being more about the love she has for her brother, than it is about any kind of romance.

The man who shows up at the office where Harry and Sarah work, to deliver food to them, is Colin. This is a young guy with only one thing on his mind. Sex. Colin is a bright eyed fool, and he seems to have just awakened from a slumber or something, at the start of the movie, telling his good friend, Tony, all about his idea to go to America and meet lots of girls. Colin must have gotten this notion from somewhere, maybe from a book he read or something, but his entire story becomes about doing this. Tony thinks he’s crazy, and the great part is that Tony turns out to be wrong. Colin does go to america, ends up at a bar in Wisonsin, and meets the hottest, most flirtatious girls imaginable, all at the same time. The funny part here is that what should be a laugh in this guy’s face at how ridiculous his ideas are, turns out to be more dead-on accurate than he could have ever imagined.

Tony, Colin’s friend, appears in another story as well. He plays the guy in charge of lighting for a movie. The film he is lighting involves a very lenghty sex scene, and so there are two stand-ins who are simulating all of the positions while Tony walks around them giving orders and testing out his light meter. It’s incredibly awkward, the things he is asking these two people to do, and they just go with it, never having a second thought. The funny thing here is that the two stand-ins don’t actually know each other at all, and that the man (played by Martin Freeman), wants to ask the woman out. He’s already done so much with her on the set, and yet from a relationship point of view, they are just starting at the very beginning.

The man who lends out his art studio to Harry and his company for their Christmas party is Mark (Lincoln), and he’s got a bit of a problem of his own. Mark is in love with the wife of his best friend. Mark’s best friend is Peter (Chiwotel Ejiofor,) and at the start of the movie, Peter is marrying Juliet (Keira Knightley). Mark films the entire wedding, having a cam-corder in his hand  at all times. The problem comes when Juliet asks to see the tape and Mark shows her. It’s all of her. The camera never moves off her face. She suddenly realizes this man is in love with her and there’s nothing either one of them can do about it. The giant note card scene that ends their story is very cute, and basically has him telling her that he thinks she is perfect before walking away. It’s one of those stories that ends with a smile, but an acknowledgement that they are in a situation where there is no answer, other than to just walk away.

There are other stories too. There’s the one about Colin Firth who goes to another country and falls hard for the woman who cleans his flat. But here’s the thing… neither one of them speaks the other’s language. This is a hump they have to find a way of getting over. And then there’s the story of the rock star, Billy Mack, (Bill Nighy), his brutal honesty while giving interviews, and his new Christmas song which just keeps climbing the charts. It’s like an ongoing news story in the background, behind everything else that’s happening, and it just gives us one more thing to laugh about. Love, Actually has so much going on, that it’s hard not to like it. Despite the many characters, every story is easy to follow and vastly different from the others. On top of that, the movie still finds time to have small moments that might not be pushing the plot further, but are certainly good for a laugh. Moments like The Prime Minister and Natalie sitting in a car with a little child dressed as a giant frog in between them, or when right before that, he goes around door to door and three little girls ask him to sing christmas carols while they dance. The fact that this movie finds time for moments like this, which don’t really advance the plot, despite everything else going on, is a big part of why this is such a fun film.