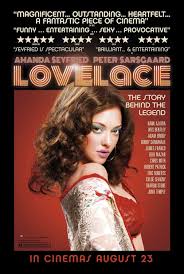 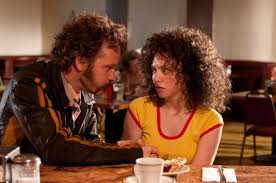 While it seems to have a unique premise at it’s heart, the movie ends up feeling like something we’ve seen before instead of cashing in on the reasons why this girl and this film became as famous as they did.

This is definitely an interesting and entertaining movie, but it had lots of potential to be something unique. Instead, the story chose to go down the usual path we had seen before over and over again. That means instead of focussing on why this movie, deep throat, really took off and was something special, Lovelace wants to only deal with the character and her abusive relationship. We never get to see the moment when she figures out what she is being asked to do, or when she agrees to do it. the movie seems to skip over some of the most imporant parts, and that’s a problem. the stuff on screen is all fine, but it’s the stuff that is missing that is the real mistake of the movie.

Lovelace is the story of Linda Lovelace, the star of the most famous pornographic movie of all time, called deep throat. Deep Throat became the sensation that it was for a whole bunch of reasons, and somehow this movie doesn’t really explore most of them. Maybe it tackles one of the three, but that is barely enough. The things that made deep throat famous were, that it was the first porno to have a full story written for it, and not just be showing people having sex. Secondly, this woman, Linda Lovelace had the ability to fit a man’s entire unit in her mouth. And finally, there was the actual story of how the character’s g spot was in her mouth, and so she could only reach satisfaction from doing a certain act.

The movie only deals with the last one of these reasons. That means there is no mention of Lovelace’s talent, (guys watch her and are impressed, but we never hear exactly what it is that she does so great), or of how this movie was the first to feature a story. We don’t even really learn what the story is, other than that one specific thing about her character’s G spot. I suppose that’s because this is a movie about Lovelace the person, and not about Deep Throat. Even still, that’s the move that made her famous, and really the only thing she ever did in front of the camera in her career, you would think this movie would give it a little more attention.

the film is mostly about lovelace’s relationship with a guy named chuck. linda is played by amanda seyfried and chuck is played by peter sarsgaard. it starts with her in highschool, living at home, hanging out with her best friend. the two of them go sun-tanning in her backyard and get scolded by linda’s mother, a self-righteous, nearly unrecognizable sharon stone. linda goes out with her friend to a roller skating derby one night and the two of them end up acting like go-go dancers on the side of the stage as a band plays.

that’s what draws chuck’s attention to her. he is there at the rink that night, and finds his way over to linda after she is finished dancing. the two of them hit it off and chuck invites them to a party on the beach. it’s now a few days later and linda and her friend go to the party. chuck says all the right things to get linda interested in him, including telling her that he does not think she is lame, despite her needing to be home by a certain time.

it isn’t long before chuck is over at linda’s house, meeting her parents, and being introduced as her boyfriend. he dresses nice and speaks about the war in a way that meets her father’s approval, but this is not a good guy. when her parents are not looking and are in the other room, chuck even goes at it with linda in the kitchen, showing that he has no respect or boundaries or self-control. it only gets worse.

linda comes home late one night, leaving chuck’s place in the middle of the night and arriving well past curfew, at her own house. she walks in to find her mother still awake with the light on, and gets slapped in the face. cut to the next day as linda is moving out of the house and chuck has her suitcase, loading it up in the car. this is the real start of linda’s life with him and it is not a very pleasant one.

it isn’t long before chuck gets arrested, linda bails him out, and then the two of them are sitting at a coffee shop counter in the middle of the day, realizing how broke they are. they are desperate for money and that’s when chuck brings linda to the apartment of a sleazy producer and director, and shows them what linda can do. he starts by having her act, and then when she leaves the room, he shows her one of his homemade movies featuring linda’s sexual talent. that’s enough to sell these guys on using her in one of their pictures.

the problem with the movie is that everything that might be interesting happens too fast or is just non-existent at all. that starts with the way linda’s decision to move out is rushed, going from a quick slap in the face to her leaving the house the next day. while that’s not the most important example, the next one is…we never see the moment where linda finds out she is making a porno. clearly chuck and these boys are tricking her here, having her act and say lines and then only showing the tape when she leaves the room. so why not show us the moment when she reads the script and realizes what she is going to be asked to do? why not show us a single argument between her and chuck about it?

we do get a few scenes on set of the movie, which is pretty cool, and then the next thing you know, deep throat has blown up and become a sensation. we see talk show hosts like johny carson making jokes about it. but again, there is never mention of exactly why this movie became so big and what it had going for it that other pornographic movies didn’t. linda goes on to stardom, meeting hugh hefner (james franco in a small role), and enjoying her fame. but chuck is abusive and that ends up characterizing the second half of the film. i like the way the movie doubles back to show us the same scenes we saw earlier in the movie from a different point of view, later on.