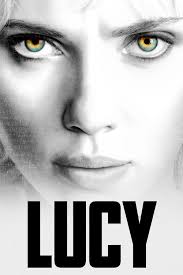 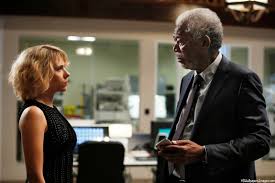 A mess of a film that starts out great, but then quickly goes off the rails once our protagonist starts developing her powers.

Lucy is a ridiculous movie. Now, there’s ridiculous like it could never happen, but at least it still exists in the real world, and then there’s ridiculous of seeing things that don’t make any sense at all, not even from a fantasy point of view. What I mean is, if this movie were about Lucy becoming a super human who could do everything that the greatest skilled humans in the world could do, such as run, fight, swim, or do anything intellectual, then I wouldn’t have a problem with it. At least these are things that humans are capable of. But when the movie turns her into a creature that can make people stick to the ceiling, or see through walls, or do countless other stupid things, you have to stop caring. I mean this woman can touch your head and go into your memories to find something out. What’s unfortunate is that the first twenty minutes are terrific and bare the mark of a much better film. After the drugs kick in and Lucy starts to become all powerful, and very much like a monotone robot, the movie totally falls apart.

Lucy is a movie about a woman who becomes something just short of an invincible machine. She basically becomes bionic and all-powerful, like a god. I would say like a superhero, only she has the abilities of multiple superheroes all at once. At some points she seems like Magneto, making enemies stick to the walls by just waving her hands. At others, she seems like Professor X, touching someone’s forehead and reading their mind. And there’s Mystique, as she walks around changing her hair color by just thinking about it (funny, that these all happen to be X-Men.)

Only Lucy is not a superhero or a mutant or anything like that. She is a woman under the influence of a very powerful drug. In the hands of director Luc Besson, this movie should have been better. Besson is the guy who directed the Professional, one of the grittiest and most emotional action movies. He also directed La Femme Nikita, a movie about a female prisoner, turned into a ferociously skilled assassin. So Besson is no stranger to the genre. But he also hasn’t made a decent or popular film in multiple decades. His last hit movie was the Fifth Element back in the mid-nineties. That movie wasn’t even that good, being more silly and campy than thrilling.  And that was twenty years ago. The days of him making movies like The Professional are long gone.

With Lucy, however, there certainly seems to be potential on the table at the start of the film. This movie has an absolutely terrific opening. I’m not talking about the quick shot of Lucy, the humanoid, ancestor to humans that opens the film, in a way that reminded me of the opening to Prometheus, but of what happens to our protagonist Lucy (Scarlet Johansen) in the first twenty minutes of this film. She is hanging out with a shady character who she used to date and he wants her to take a suitcase into a building and drop it off for someone. Only she refuses.

The man tries everything he can think of to get her to go. He gives her a reason why he can’t do it himself. He offers her money. And when none of it works, he handcuffs her to the suitcase. She demands the key, only he tells her he doesn’t have it and the only person who does is the man inside the building who she needs to bring it to. This scene is handled with nice emotion, taking it’s time, not rushing anything. And at the same time, it’s pretty cool how the movie gets right into this scene, with no setup about who these characters are and how they came to be in this spot.

When Lucy walks into the building, the man at the front desk acts a little strange. He calls the man she is brining the suitcase to, and then tells her to stand right there and wait. When Lucy asks if she can sit down, the man refuses her this request. And then the businessman she is bringing the suitcase to arrives with a bunch of men walking alongside him. Lucy looks out the window, at the guy who gave her the suitcase to bring, and watches him get shot, right up against the glass. The men grab her and bring her into the building.

Once there, they force Lucy to open the suitcase up while they all hide behind shields or walls. This setup is terrific. I love the way the movie stays in this one scene for a long time, allowing the details to form around the sides. Lucy does open the suitcase, despite her concerns about what might be inside. Once she does, she describes the contents to the people in the room, claiming there are four blue colored pouch bags. The head boss comes over to her, offers her a job, and then knocks her out.

When Lucy wakes up, she notices that in her belly area, there is a new wound. It is big and bloody, and all bandaged up. But blood is still seaping from it, soaking the bandage. Lucy quickly realizes that the men have planted one of the bags inside of her. She is brought into a room with three other men who also have had the same experience. A pouch has been placed inside each of them, and they are to be the mules for this drug. Lucy is sent off to a place where she is being held prisoner, and everything good about the movie pretty much ends. By this point, the movie has been quite entertaining. There was a thrilling and scary setup, some crazy and unpredictable situations, and a definite, imagine you were in this situation, kind of atmosphere.

But now all of that ends. The way the movie was taking its time and developing careful details ends. A guy kicks Lucy in the area where the drugs have been stored and this activates them. Suddenly she starts to become super human. The movie wants us to believe that what is happening here is Lucy is slowly starting to use more of her brain. Every twenty minutes or so, a new number pops on the screen, like 20 % to show how much of her brain Lucy is using. There is a common myth or theory that humans only use 10% of their brain. This movie is made based on that theory to question, what if a human could suddenly access much more of it than that? The problem is that scientists don’t actually know what percent of our brain we use, and so they certainly have no idea about what it would be like if we were able to use more of it.

Morgan Freeman shows up in the movie as a professor who has knowledge of the subject. He’s supposed to, anyway. He lectures about the idea, but when Lucy comes to him, he doesn’t exactly have answers for her. She goes to see a group of scientists, and instead of being able to help her in any way, or supply her with any kind of understanding about what is happening, they all just stare at her and watching the things she can do in amazement. I suppose the point of all this is something that Freeman told Lucy earlier on when they were speaking over the phone. He tells her to pass the knowledge on. Maybe that’s what she is trying to do.

Still, there are a ridiculous amount of problems with the movie. There’s only so many times you can stay, “this is ridiculously stupid,” while watching something. The premise is fine, and the setup is terrific, but where it goes is a disaster. This movie should have had Lucy learn to do things that other humans can possibly do, only that they have to train for. Have her be an amazing runner or swimmer. Give her the genius that John Travolta had in Phenomenon or the skills that Bradley Cooper had in Limitless. But it’s gotta be things that humans actually are physicall capable of. Here, she can see through walls, enter computers, and know exactly what someone is going to say before they say it. The movie gives her so much power, that it seems to lose track of exactly what she can and cant’ do. That’s why in moment she reads a guys mind to go into his memories and find an answer, but then later on, she asks another guy where the suitcase is. She doesn’t need to waste time asking. The same can be said of a shootout scene between cops and criminals where Lucy can just step into the room and stop the entire thing by snapping her fingers, but instead hangs out in the other room talking to scientists. None of it makes any sense, and the final minutes of the film are absolutely awful, leaving us with one of the worst endings in a while. Still, one can’t forget how great that opening was, and how perfect of a setup we got to this whole thing. If the movie didn’t get so carried away, this could have been a pretty decent film.