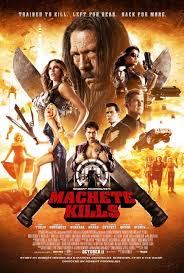 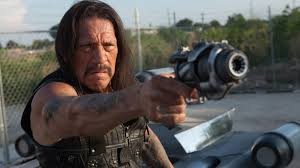 A very different kind of movie than the first film, this one is nothing special, but is still enjoyable as a goofy, b movie.

Machete Kills is not in the same spirit as the original film. Sure there are similarities, such as the amounts of graphic violence, but as far as storyline is concerned, this is a very different film. It’s about a down and out mexican vigilate, but about an assassin working for the president of the united states. That along with the high-tech villain that Machete is going after, make this feel more like a low level bond film than anything else. If you can get past all that, then the movie is okay. It certainly isn’t great, like the first film was, but there are some jokes and interesting moments.

The problem with Macehte Kills is that it’s not really Machete anymore. Whatever spirit and energy and ideas were behind the making of the original Machete film, they are all gone and out the window with this sequel. The Machete concept came from a fake trailer of the Tarantino/Robert Rodriguez movie, called Grindhouse. Rodriguez made a trailer for Machete, completely as a joke, like how ridiculous would it be if there really was a movie like this out. Then Rodriguez decided that if it was a real movie, it would be so much fun, that he actually made it, as a feature length film. That movie, Machete, was great, because it embraced the Grindhouse feel.

Mackete Kills does not. So what exactly is the Grindhouse feel? It’s a combination of bad, grainy filming, over the top violence and wild sexual situations. The jokes and cursing are fast and furious with intentionally corny sounding one-liners being dropped all over the place. basically, there’s a real Blaxpoitation style to these movies. Just imagine Pam Grier talking tough as she beats up a bunch of prostitutes and pimps. That’s what Grindhouse was all about.

and the first machete film actually lived up to it’s trailer. everything was dirty and seedy and corrupt. you could tell that this was the same director who made desperado and from dusk till dawn, movies that took place in some of the dirtiest bars of mexico. everything felt right about that movie. the character machete (played by veteran actor danny trejo), was just a regular guy, picked up off the streets, kind of like the way ice tea was in the movie surviving the game, a homeless dude, snatched up and forced to be a target or patsy.

in machete kills, the tables have all been turned. instead of this movie being about the dirty, gritty underworld, it’s about the president of the united states sending machete out on a mission. all of a sudden, he’s basically the new james bond. the violence is still there, in this movie, but just about everything else is gone. that means pretty much no sex at all, and not nearly the same level of witty, graphic one-liners.

it also means a pretty ridiculous and lame storyline. the plot has the president call in machete to find a guy who has a bomb attached to his heart. machete has to go through a number of hoops just to find this man. first he has to go to a brothel where he hopes to find the guy’s daughter, and then use her as bait. with every new place machete goes, he comes across people who are trying to kill him. it’s overkill in this movie, and that takes us out of the violence.

there are at least two scenes, for example, where more and more guys start arrriving on the battlefield from different organizations. it’s like the spoof scenes in anchorman when all of the celebrities show up to make cameo appearances in the big rumble. only in those movies it’s played for a joke, and here it is relatively serious. i am definitely glad there was a lot of violence in this movie, and would much prefer it that way than the opposite, but the problem is that the violence isn’t really all that good.

good violence is creative and finds unique ways to present itself and make us drop our jaws. the first machete did that. not only did he grab random doctor’s tools and use them as weapons, but at one point, machete even used a man’s intestines as a bungee chord to repel down the side of a building, die hard-style. this movie has some attempts at doing things like that, but none of them really work. for starters, the first action scene of the movie, (one of those two scenes where a ton of guys from different groups show up), has machete pull out just about all of the stops. he slices heads, takes out a man’s insides, and even cuts a guy in half, straight down the middle. this is pretty cool, but the problem is, it leaves nothing for the rest of the film. we get desensitized to the head slicing, and when it keeps happening throughout the movie, we don’t really care anymore.

aside from the action losing its momentum, the story continues to get weaker as the plot unravels. this really is a tale of machete just going from place to place. when he goes to the brothel, he is attacked by an army of prostitutes, led by modern family’s sofia vergara. he is kidnapped and brought to the mexican drug lord’s home (the guy with the bomb attached to his heart), only to find even more guys trying to kill him.

these guys work for voz, who is the head villain of the film. he’s played by mel gibson, and is the closest thing to a bond villain that you can imagine, complete with cool hideouts and new technology. voz has vehicles and weapons that he invented himself. i like the tribute to star wars, with the kind of hubber-craft car they ride around in, and the fact that this movie gives credit to where the idea came from, but the fact remains, voz is a larger than life bond villain and that’s the last thing that we should be finding in a machete movie.

machete kills is an okay movie. there are plenty of parts that are fun, and as a dopey b movie, it is certainly acceptable. the problem is, it is in no way anything special. that’s a real shame because the original film really was unique and creative. this new movie doesn’t even attempt to go for the same kind of thing. machete did get mixed up with corrupt politicians in that first movie, and i suppose the next step would be to bring in the president, but once that happens, this is no longer a movie about the underworld. machete goes from lone vigilante to top government assassin. it’s not what this world is supposed to be all about. the movie really loses sight of its original founding principles. i get that as a sequel, the stakes had to be higher, but to lose the spirit of the first film so carelessly is a huge mistake.