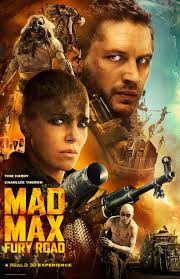 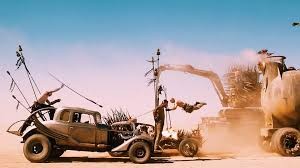 A visual rush, the action and world are pretty cool, but the story doesn’t amount to much, and things do get tiring after a while.

There’s no question, this is a cool movie. Some say there has never been a film like this before, and to a certain extent, those people have a point. It’s a loud, fun, and ferocious action picture. But the story really doesn’t amount to much, and the characters and dialogue don’t help it along either. For just the stunts and style alone this is fantastic, but if you’re looking for anything more, this is not the movie.

Mad Max Fury Road is a sort of sequel to the original Mad Max trilogy from the late-seventies / early eighties. That series of movies included only one truly good film, the second of the series, called The Road Warrior. Mad Max: Fury Road tries to be similar to that movie as often as it can and definitely pulls off what it’s going for. The movie was made by George Miller, the man who wrote and directed all the films of the original series, and nobody knows this world better than him. With this new movie, Miller has whatever effects and action ideas he could possibly imagine at his disposal. The beautiful thing is that with today’s computer effects driven technology, Miller still goes for practical effects more than anything else.

What that means is that he actually does the stunts. Unlike other movies that computer generate all of the action, Miller has real cars slamming into each other and flipping over and exploding. He has real actors jumping around and fighting. The result is some of the coolest action in years. In fact, the best thing about this movie, hands down, is the action and stunt choreography. The film is a visceral ride that often feels like non-stop excitement, and every one of these stunts is pretty cool.

As far as the story goes, that’s where this movie starts to fall short. The movie is basically one long chase. To say that there is a lack of story is an understatement. Max and a group of women are on the run and being pursued by a gang of warlords. This movie seems to be out to prove that story is unnecessary. Now, to be fair, there is a story here. It is just minimal. The characters drive from point A to point B, realize that there is nothing at point B, and then turn around and drive back to point A.

The characters are also not very developed. Especially Max. He’s played by Tom Hardy, a fantastic actor (his movie Locke, from last year, was a sensation.) Only Max is a man of few words and Hardy has no problem playing him this way. At the start of the film, Max is standing alone on the edge of a cliff, looking out over the wasteland. We listen to his voice-over about his take on society and how crazy everyone is, and then a bunch of vehicles come riding up behind him. A brief chase ensues, with Max’s car  flipping over and him being taken prisoner.

That leads to a sort of cave holding cell where Max is being kept. The people here are all super pale-skinned and bald. They tattoo Max up and do all these weird things to him, and when they are about to burn some marks into his skin, Max decides it’s time to escape. He fights his way out of the mob of men who are holding him, and makes a run for it, only to find out that he is surrounded by cliffs and that there really is no way out.

Meanwhile, there is a warlord named Immortan Joe, who wears all kinds of strange armor and a mask that makes his face look like a skeleton crossed with a giant cat. When we first meet him, it’s while he is putting on his outfit, one piece at a time, and we get a good look at his deformed body. This introduction to the character is just like the way we first met Ronan The Accuser in Guardians of the Galaxy. We learn that many people in this society have deformed body parts, just like Immortan Joe. He’s a tyrant who holds water over the heads of his people who desperately need it, in order to control their well-being.

Immortan Joe also has a group of women who he calls his wives. He impregnates them and keeps them all together as his prized possessions. That is until one of his top assassins, Imperator Furiosa (Charlize Theron) decides to rebel against him and drive away with all of his wives. They don’t exactly resist her, either. The wives feel like slaves and appreciate Furiosa rescuing them. Max is part of the escape too and so the bunch of them end up together. They even have one of Immortan Joe’s men tagging along on their truck. This would be Nux, played by Nicholas Holt.

All of these characters are on the run together and only Furiosa actually has a plan for where to go. She tells the group about an area known as “the green place,” which is where she is from. They go out seeking it, but are attacked a number of times by vehicles in the employment of Immortan Joe. One of these vehicles that attacks early on is covered in spikes and pine needles, and looks like a giant porcupine. They try to blow this car up or flip it over in all kinds of ways, and the car resists nearly all of them.

Despite not having much of a story, the movie still moves along nicely and seems to be going strong until just past the halfway point. Suddenly it turns to nighttime, the action slows down, and the dialogue finally starts to come out. Now, for the first time, it is apparent just how little thought has gone into the characters of this movie. We know close to nothing about Max, and not a whole lot more than that about anyone else. Despite realizing this, there are still cool moments ahead, such as  when Max and Furiosa use a rifle to shoot a man standing on top of his car. This man is  pretty far away, and in order to hit him, Max and Furiosa alternate turns of firing the rifle, until one of them hits the mark.

There is a lot to like about this movie, and most of it comes out in the first half. While the story, characters, and dialogue are lacking, the attention to detail is pretty great. There are so many little things about this society and their worshipping of cars, metal, and women. They spray chrome on their mouths, for example, when they think they might die, because if they end up meeting the chrome god in the afterlife, they want to be prepared. The camera movements and quick cuts are fantastic. So are the visual characters, including a guitar player who is attached to his vehicle by strings and stands on the roof of his car whaling away while flames come out of his guitar. This is definitely a cool movie and the action is terrific. If only there was a little more to the story.