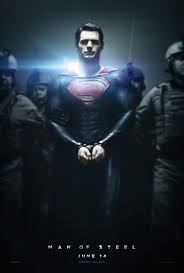 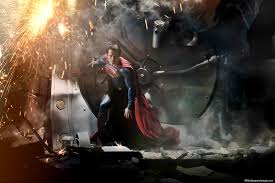 A pretty cool, dark take on superman, that, despite some flaws, ends up being smart and exciting.

man of steel is the superman answer to christopher nolan’s dark knight movies. that means that it is dark and serious and features the same kind of tone as those movies did. this is in large part because the team from those movies (writers, producers, and even music composers), are on board for this movie too. and it works. we finally get a superman movie that is void of playfulness, and that we can get behind and take seriously. the story isn’t always great, and the action at the end certainly goes off the rails, but other than a few flaws, this movie has a lot of creativity going on. there’s the opening to the film on planet krypton, which is just fantasticly detailed and depicted. then there’s the two different father figures who both are powerful characters performed by great actors, giving their all. there’s the way that director zack snyder tells the story of this guy growing up and figuring things out about himself. the action in the second half of the movie could have been better, but otherwise, this movie happens to be very good.

Man of Steel is the superman movie we needed. It’s the dark take on the character that best matches what director Christopher Nolan did with Batman in his Dark Knight trilogy. Those movies worked, even when the story didn’t, because they were scary and left you uncertain about what was going to happen next. Their villains were menacing and mysterious. In man of steel, the combination of dark and muted tones, with Hans Zimmer’s music (the same guy who scored The Dark Knight movies), and David S. Goyer’s writing (the writer of those movies), finally gives us the superman for today’s generation. Some people might have a problem with how different he is from Supermans of the past, but I think this is the version of the hero we were asking for and needed to see.

Superman has always been a playful, colorful character. he’s always been campy and funny and filled with joy. and now he’s not. and that’s a good thing, because let’s be honest, a hero filled with color, humor, and joy is not very cool. Bryan Singer tried to do it with his take on the hero in the film superman returns. that movie came out after nolan’s batman begins, and so the idea of dark superhero movies had already been put into audiences heads. and once we had the notion of that kind of movie, and saw what it could be like, there was no turning back.

man of steel goes right along with that vibe. superman’s red underwear / speedo is gone, and he’s all the better for it. he looks fantastic in this new costume. there are no more bright colors, but dark, muted blues and reds. and there is very little humor in this movie too. now, everyone loves to laugh, but the lack of humor, is not really such a bad thing. was there so much humor in nolan’s batman movies? man of steel has a harder job than those films ever did, because it wants us to take seriously the story of another planet and of an alien being. the only way to present that even remotely-serious is to go dark, and semi-realistic, (at least in the way that people react to things), and that’s exactly what this movie does.

when it begins, we are on planet krypton with jor-el, superman’s father (russell crowe). his wife has just given birth, and while the baby is still in their arms for the first time, the planet is undergoing some massive destruction. apparently the kryptonians have tapped all of their planets resources, dug too far underground in order to get at them, and this has caused their planet to begin imploding. general zod (michael shannon), has an idea of how to stop it, but he is not met with approval from a board of directors, and so he resorts to violence. zod tries to take over the planet with an army and when his uprising is put down, he and his soldiers are sentenced to become frozen statues in an orbiting prison.

the beginning of the movie, on planet krypton, is fantastic. it might actually be the best part of the whole movie, with russell crowe riding a four winged flying creature around that looks incredibly cool. i like how dark and detailed it all is, and also how the movie pretty much gets right to the action. this is fascinating stuff. i also like that zod and his team are imprisoned and sent off into space, just like in superman II, the christopher reeve film, that began with zod and his team being sentenced to a space prison, with rings circling around them.

now we move to earth and are with clark kent (henry caviLL), as he is doing manual labor on a ship in the middle of a storm. he is an adult here, and gets into a little bit of trouble where he is almost flattened by a falling object. we flash back to see him as a child, growing up with jonathan kent (kevin costner) and ma kent (diane lane), as his parental figures. the way the flashbacks are handled is pretty neat, first seeing him as an adult on the ship, and then seeing snapshots of him as a child.

the overall story of the movie isn’t really that special. we get these flashback scenes which are great (one has young clark at school, looking at his teacher’s skeleton and getting freaked out), but then we get scenes of a reporter, lois lane (amy adams), going to the north pole to try to uncover something, and clark kent showing up there as well. it’s in these scenes that he finds a ship or remains of something from his planet and is able to activate something whereby a sort of halogram of his father comes on and speaks to him. this is the way that clark kent finds out about who he really is and also gets his costume.

it’s in this second part of the movie that we also learn about clark as an adult, and the fate of jonathan kent. kevin costner and russell crowe are both pretty great in this movie, playing the two father figures. the scene where jonathan makes a huge decision with incredibly sad results is just fantastic. this is gripping drama-kind of stuff, and it is all handled really well. if the second act of the movie is about the human story, then the third act is all about the alien story. some of it works, some of it doesn’t.

leading up to the third act, lois lane is on a mission to investigate and find the mysterious man who saved her life in the north pole. she does find him, and learns all about him, but also agrees to keep his identity a secret. that’s when general zod shows up on earth and starts making threats. the scene where he comes over the airwaves is pretty cool, but i don’t understand why there wasn’t anyone questioning it. nobody thought that maybe it was just hackers or some ridiculous stunt? there could have been a mention of orson welles’ war of the worlds airwave prank here, or anything else. a little bit of doubt would have been nice.

and then we get the climax, and it is just way too much. the destruction of buildings is so massive and computer generated that we stop caring. it all reminded me of the matrix sequels, and how massive destruction became the only thing that mattered. this is the kind of thing one would expect from michael bay and his transformers movies. one of the many things the dark knight trilogy got right, is that it’s action always looked real. that’s what gave it more believability than anything else. now it’s one thing to go to another planet and have things that don’t look real (like the start of this movie), but to do it here, on earth, when we all know what real buildings look like and what fake buildings look like, is not a smart move. when the action is just destroying things, it is uncomfortably boring. when it gets down to actual fistfighting, we get back on track. man of steel is a very cool movie, dark and creative just the way it needed to be, but it definitely has flaws. still, it’s the coolest take on superman that we’ve had in a long time, and it represents a new approach to the hero that is gritty and serious, just the way it needs to be.