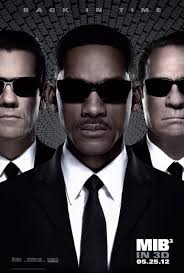 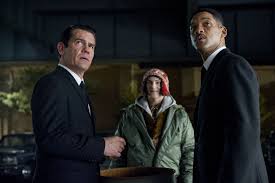 Better than the original, this movie is both fun and entertaining, although it could have used more creature aliens.

It is the best movie of the trilogy for starters. That is because for the first time, a man in black movie gets just about everything right. The creatures actually look cool, and real. Credit the use of makeup and animatronics over computer effects for that. And the story is very creative as well, involving time travel and Agent J (Will Smith) having to go back into the past to save Agent K (Tommy Lee Jones) before a villain kills him. That villain, known as Boris the animal, is great, and so is Josh Bolin, playing a younger version of Agent K. There could have been another actress in the movie, that severely lacks females, and also more creature aliens interspersed throughout the film, but for the most part, everything is good here.

Men In Black 3 might just be the best Men In Black movie yet! That’s not to say it’s amazing or even great, because it isn’t. But it’s still better than the other movies because it gets most things right. Finally. The humor has always been there, in all three films, so that’s nothing new. But now for the first time we get a creative story, an interesting villain, and some cool looking aliens.

Let’s start with the aliens. Unfortunately they really only show up in the first third of the film. Yes, the main bad guy is an alien, and he’s in the entire movie, but I’m talking about the many different strange creatures. So if they’re only really in a part of the movie, than how does this movie get them right, more than the other films did? Because finally it looks like they are making the aliens, using makeup, animatronics, and whatever else. In the other films, computers did most aliens. And they looked fake as hell. Like drawings. They looked like George Lucas taking his lame creature ideas from the recent star wars movies and having a field day. When makeup is used, then aliens look real, because there is actually something physically there (unlike computer generated effects.) it makes a huge difference.

So this time, Rick Baker, the guy who made the aliens for all three men in black movies, goes back to the old way. The way aliens used to look in movies from the seventies, eighties, and nineties before computers ruined everything. And in the first third of the movie, Will Smith and Tommy Lee Jones (Agents J and K), go around busting up whatever aliens they can find. They go to a Chinese restaurant and get into all sorts of fun just from dissecting the items that are on the menu and having a look at each one in the kitchen.

Then we meet the villain, Boris the animal, played by Jermaine clement fro HBO’s Flight Of The Concords. He’s a fun actor and the part is well written. He also looks extremely cool. Our introduction scene to him involves breaking out of a prison and the whole thing is fantastic. Probably the best scene in the movie. We follow a woman with a Boris tattoo down a long, dimly lit prison corridor, as she holds a mysterious sort of cake in her hands. Then the guards need to let her passed tons of security checks before the mechanical doors can open for her to see Boris. And when we do see him, he’s all locked up in metal restraints that would make Hannibal Lector’s holdings look like day care.

That’s when we meet the spider-like creature that lives inside his hand. This thing pops out of the cake, crawls all over Boris, eats away the metal things that are holding him in place, and then climbs into his hand before becoming a sort of dart spewing cannon. There’s more to his escape than this, including a ton of guards that try to stop him and a hole in the room, which sucks people into outer space. The whole thing is fantastic. I especially love the spider creature, which is gross and creepy in a way these movies used to shy away from. It’s more like the creatures of Alien or Total Recall, than like the PG family friendly garbage these movies used to be.

And then we get into the storyline, which involves time travel. It’s actually pretty clever; with Agent J coming into work one morning to learn that agent k has been dead for a few decades. He was killed in the late sixties by Boris the animal. Agent J finds the right people who can point him in the direction he needs to go, and that direction happens to be the past.

Even the time jump that Agent J does here is cool. He jumps off a skyscraper and falls through the air, and all of that is routine, but then something interesting happens. During his jump, he starts to experience different pieces of history. It only lasts a few seconds, but we get to see him do this time jump twice in the movie, and each time it’s extremely cool.

Once he makes it into the past, we get Josh Brolin doing a fun Tommy Lee Jones impersonation. There’s also Andy Warhol, a party right out of the sixties and Austin Powers, and Michael Stahlberg as a future time-line seeing alien. Stahlberg looks like a human (as long as he keeps his hat on), but his character is pretty outrageous. I’m a big fan of this actor and his comedic timing, ever since he starred in the fantastic Coen Brothers movie, A Serious Man, and here, once again, he delivers the laughs.

Unfortunately, the movie does drag at times. For one thing, there’s only one woman in the whole movie. Emma Thompson plays her, and she isn’t very funny or interesting. Thankfully, she’s kept out of most of the film, but still we could have used some good-looking actress somewhere in the mix. Even if she turned out to be an alien. Speaking of aliens, we could have really used more of those in the second half too. Just a cool looking creature popping up every now and again, like we got at the front end of the movie with the Chinese restaurant.

While there are parts in the middle that were certainly lacking, and reminded me of why these movies always fall flat, the movie did pull itself back together in time for a cool ending. It involved a rocket ship launch, scaffolding fighting, and jumping around to different heights in a way that reminded me of the opening to Casino Royale (only not quite as cool, of course.) and then after all was said and done with the villain, there was a great revelation moment involving some secrets and explanations from our main character’s past. This movie, like Ocean’s Thirteen, seemed to have a very strategic plan to make up for the lousy sequel that came before it. Men In Black III figured out all the reasons why the other movies didn’t work, starting with the lousy villains, and corrected nearly all of them.