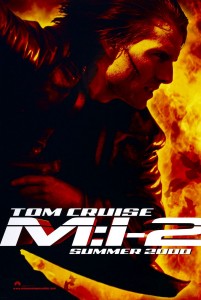 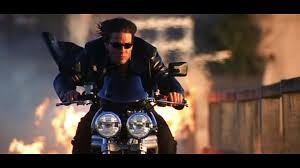 A movie that is completely action based, with a rather weak plot, this film is not very smart and is by far the worst entry in the series.

This is not a very good movie. The action, for the most part works. That’s why you hire director John Woo, after all. Maybe there was criticism about the first movie that there just wasn’t enough action. I would take that, and the storyline that went along with it, any day, over this piece of junk. One thing pretty special about the action scenes in that earlier film (few as they might be,) is that they were all very memorable. Here, the only thing memorable is how often Woo cuts to slow motion for his stunts. It has the opposite effect of what he is going for, and ends up making them all look incredibly fake. The storyline is just okay. It involves an ex-girlfried coming back into the villains life in order to spy for the good guys, and is taken right off the page from the Hitchcock film, Notorious. I don’t mind borrowing from older movies like that, so long as it is done well. Here, in Mission Impossible 2, it is not. We actually watch the villain get heart-broken and cry for goodness sake. This movie is a little too sappy, and not nearly smart enough.

Mission Impossible 2 is not a very good movie. In fact, it is by far the worst film in the entire series. The beautiful thing is that it is also not all that bad. The story is weak, but it’s hardly terrible. The action is by a man who was at this time considered to be the greatest action director around. John Woo. The problem is that Woo is a bit too corny and too artisitc. He goes for slow motion and music that cuts between fast and slow, as if he is staging an ballet. Sometimes you want to really see what’s happening in real time, without all the slow motion cuts, and you just don’t get it here. On top of that, the dialogue and characters are pretty one-dimensional, and we end up with a movie that is a bit of a mess.

The airplane opening sequence is one of the best scenes in the movie. This is right at the start of the film, where we don’t really know who the characters are, and who might are villains be. There is an old man who sits down with a briefcase, and we watch a recording of him explaining its contents to find out that whatever he’s carrying is pretty important. Ethan Hunt (Tom Cruise) sits down beside this old man, and there is a sigh of relief from the man with the briefcase. He explains that the only one who he can trust with it is Hunt. That’s when the pilot in the cockpit kills the other men in there with him and the passengers on the plane start to pass out, one after the next, from breathing in gas through their masks. We get the final twist of the scene, that someone is not who they said they were (or looked like, for that matter,) and the briefcase is stolen. Our villains now rise up out of their seats and jump out of the plane for a skydiving getaway. Very cool stuff.

Unfortunately, John Woo, as well as the screenwriter here, Robert Towne, are both a bit too old and out of touch for a movie like this. Towne is the guy who achieved his greatest success back in the seventies, with Chinatown. He did write the first movie, which was a far better film, but here with this sequel, he simply borrows the most basic elements of the Hitchcock film, Notorious, and calls it a day. Ironic, since the last movie was directed by the true fan of Hitchcock, Brian Depalma. Here, it seems like they are really just trying to rip the storyline off.

Following the airplane opening (and good as it was, we got a much better airplane attack opening in the Chistoher Nolan film The Dark Knight Rises,) we join up with Ethan Hunt while he is rock climbing on the cliffs of the Grand Canyon. This is his vacation. Why is he doing it? Because this is what he does for fun. It has nothing to do with the story of the movie, and is really just Woo’s way of giving us an extra action scene. This one I am okay with. At least it comes back into play later on in the film, when Hunt has to climb a rock wall in order to infiltrate the villain hideout. But there is another action scene coming up, (the car chase around the mountainside scene,) that is completely pointless.

Ethan receives a message via exploding sunglasses from Anthony Hopkins. He then goes to meet Hopkins at a remote location in Spain. Now, Hopkins is a wonderful actor, but he only has one and a half scenes in this movie (this early scene and then a very brief one at the end.) He is thrown in there for a very forced cameo, and despite his limited amount of time, the movie still manages to screw his role up. When Hunt put on those sunglasses, Hopkins told him that Hunt should have let them know where he was going on vacation. In the two scenes that Hopkins appears in both times after that, Hunt tells him, “next time I’ll let you know where I’m going on vacation,” and Hopkins responds with, “no, don’t. If you did then it wouldn’t be a vacation.” It’s meant to be a running joke, but it doesn’t work considering that Hopkins is contradicting himself.

The mission that Hunt is given here involves the stolen object from the briefcase on the plane. There is a virus, known as Chimera. Then there is an antidote, known as Belerophon. The villain has stolen one of these. Hunt needs to find out why and what he plans to do with it. The plan is to use the ex-girlfriend of this man, Sean Ambrose (Dougary Scott, in the role he was contract committed to, causing him to have to bow out of playing Wolverine.) The ex-girlfriend, Nyah, broke up with Ambrose, and he wants her back. This all sounds incredibly childish. The MI team is going to have Nyah locked up for something that they are confident Ambrose will get her out of. If that works out, then Nyah can be a spy for them and learn of Ambrose’s plan.

Everything works as planned and the bad guys not only get Nyah freed, but then take her in. A movie should never have everything go exactly right, according to plan. If so, then what was the point of having the film explain it to us beforehand, just for us to watch it again, exactly as we thought it would happen. Ambrose is very hostile to anyone who questions Nyah’s loyalty, including his best friend, who Ambrose uses a cigar cutter on. We are reminded of the bloody finger this man now has, one too many times, in this film. Ambrose takes Nyah to the racetrack, where he will be making a handoff and receiving a disk with some critical information on it A word to the wise. Your girlfriend is a known thief, who has been arrested for this. You don’t completely trust her, since she resurfaces on the grid right after you pulled off the biggest airplane heist in history. Maybe don’t bring her to the racetrack at the exact same time you are meeting up with your buyers for a handoff.

Of course Nyah steals the disk from Ambrose and we find out that Ambrose needs to break into a lab to steal the virus (I guess he has the antidote.) Now, Hunt and his team have to make that break in first. This movie really uses a  lot of the same themes as the first film. There’s the item the bad guy has and the need to find out who he is selling it to, and what he is doing with it. There’s the idea that maybe the bad guy only has half of what he needs (in the first film, he had half of the NOC list, but needed the other half to connect the real names with the fake identities of the spies out in the field.) Now there’s also the way that our hero has to break into government headquarters just to retrieve the same item that the villains are after.

We now get a lab sequence where Hunt skydives in (we already got the bad guys sky diving at the start of the film,) and gets into a shootout with the villains. The staging of the scene looks great, but the action isn’t of the same quality that Woo has pulled off with massive shootouts in the past (just watch the car factory or Chinese restaurant scenes in Hard Boiled.) All of this leads to Nyah injecting herself with the virus (really?) and then Hunt having to break in to the villain headquarters in Australia.

That final sequence is loaded up with action, and a lot of it is martial arts. Some of this works and some of it doesn’t. When Hunt does a flip in the air and shoots a guy, while he is upside down, it is ridiculous. Especially since this very guy was just firing a machine gun at Hunt who was simply running away, and the villain couldn’t hit him with a single shot. The whole thing is very over the top, and reminds me of the start of the film, with Nyah and Hunt slamming there cars into each other, while on the side of a mountain, for no apparent reason at all. Here, Hunt does have some pretty killer moves, especially in his final hand to hand fight against the villain. He flies through the air to deliver kicks in ways that might make Jean Claude Van Damme and Jet Li jealous. Except that it all happens in slow motion here, which makes it seem a little too fake. I’d like to see just one of these moves happen in actual real time. The movie is okay as an action film, in much the same way that John Woo’s earlier American movies were (Broken Arrow and Face Off.) As a spy movie with a decent story, this one barely works at all. Even the characters and dialogue are weak. Case in point, we get the line, “We just rolled up a snowball and tossed it into hell.” Enough said.