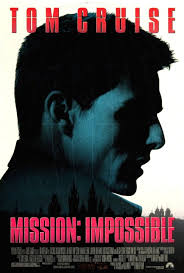 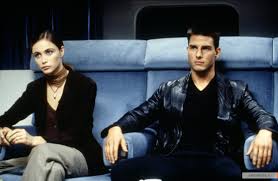 A pretty decent mystery movie, this one might be light on the action, but it is still a lot of fun.

A very smart movie, this one might actually be too smart for its own good. That is to say, it is more confusing than it needs to be, and you really have to pay attention. Not everything quite makes sense (Ethan Hunt really figures out that Job name and password and the email address he needs to send things to, really?) Still, if you ignore the minor elements like that, the movie works as a nice sort of mystery-conspiracy film. There isn’t a whole lot of action here, but every action scene that is there, turns out to be incredibly memorable. From the fish tank to the white room to the bullet train sequence, director Brian Depalma is clearly going for big set pieces than for quick fight scenes, (basically the exact opposite of what the second movie did,) and with this first film in the series, it really pays off.

The first Mission Impossible film is a well-made mystery. It’s a Brian DePalma film, and one of the last big budget movies he put his hand to. The movie is marked by his style, and that’s a good thing, as Depalma had a very unique approach to storytelling. From Blow Out to Dressed To Kill to Snake Eyes, the man was a student of Alfered Hitchcock and classic films, and used camera tricks to really capture a certain point of view. Now, Depalma made plenty of other, more well-known films, like Scarface, The Untouchables, and Carlito’s Way. But with these first three, he really demonstrated his style. Mission Impossible shows us that too. Examples of this include point of view shots where we see only what the character sees as he turns his head, extends a hand to shake, or speaks to someone. Depalma also loves the moving through walls technique to see the insides of rooms. Here, he uses it at the start of the film to take us from a hallway to the inside of an elevator.

The movie gets off to a start pretty quickly with the characters in Russia, trying to extract some information from a man who has just been through an ordeal. The characters drug the man and get the information they need before continuing on their way. This leads us to an airplane scene where the leader of the team, Jim Phelps (Jon Voight,) receives a tape that explains the mission to him. There is a list which contains all of the code names of spies as well as their true identities. This is known as the NOC (Non-Official Cover) list, and it has been stolen. The person who has it in his possession is about to give it to a buyer at a party in Prague. The team must infiltrate the party, recover the list, and find out who this man is selling it to.

The party scene is the first real big scene of the movie. It begins with the team members sitting around in a room, discussing what each of them will do. Despite taking a moment to share this with us, it still doesn’t quite all add up. For example, why is Jack (Emilio Estevez) sitting on an elevator just to hack into the computers for fingerprints and identification? Is the elevator ceiling really the best place for that? And isn’t Jim Phelps also hacking into computers from somewhere? What is he doing that is different from what Jack is doing? I’m not exactly sure what comes of the party situation at all, other than that they find the seller and are able to follow him outside.

From there, everything goes to hell. The whole team is killed, save for Ethan Hunt (Tom Cruise,) sporting a short and spiky haircut that reminds us of how young he was back in the nineties. We watch Jim Phelps get shot, through his headset camera, which again shows us his point of view, on a bridge. The car that they planned to use for a get away is blown up. And Hunt receives a call from the head of the CIA, a man named Kittridge, to come in and meet him. This meeting takes place at a restaurant in Prague with not only a large fish tank inside, but also a huge tank that runs above the entire restaurant on the second floor. It’s the kind of restaurant that is so amazing, it probably only exists for the tanks to be blown up. And that’s exactly what happens. Kittridge gives Hunt the business about how he is the only survivor, so it has to be him who was the mole. Hunt uses his red light-green light gum to blow the tank, and water explodes everywhere. It’s more of a cool moment than an action scene, with a few quick shots of the tank blowing up and water flooding down behind Hunt.

One thing interesting that came out of this scene is that we learned the stolen NOC list was a fake. The CIA knew there was a mole on the team and set the whole thing up in order to catch the person. And now they think it’s Hunt. Another reason for this suspicion, besides the fact that he is the only one left, is that Hunt’s father’s bank account has just received a large transfer of money. The mention of his parents (his Mother and Uncle are also brought into the film, later on) is a nice touch and makes the character seem more real. It’s something that was completely missing from the second movie, and brought back again, by way of a fiance, in the third film.

From his meeting with Kittridge, Hunt is able to get enough information to find a woman named Max. She is the buyer of the NOC list. The person who is selling it to her is  man named Job. Apparently Job is the guy who killed the entire team at that party in Prague. How exactly Hunt figures all of this out, (the name Job, the password and email address to contact Max, and also to use for Job when contacting her,) is all a little much. Still, he does get in touch with her and makes a deal. He is not Job, and he tells her that, point blank. But he can get her the list and is willing to give it to her in exchange for her producing Job. If all of this sounds confusing, to a certain extent it is. This is the kind of movie where you have to listen really closely and pay attention. If you want a pure action movie where you don’t have to watch closely in order to understand the plot, the second Mission Impossible movie is more on that level.

So now Ethan Hunt has to break into the CIA headquarters in Langley, Virginia, in order to steal the real NOC list. I like the way this movie makes that task very difficult and gives us an all white room with the highest levels of security. We’ve seen plenty of secure rooms in movies at this point (The Ocean’s Eleven films certainly helped with that,) but the room here, in the first Mission Impossible, stands on its own. That’s because with this one, it’s not just about getting into the room, but also the different systems that are at play, on the inside of the room, while nobody is inside of it. In order to get into the building, Hunt has to recruit a team to work with him. There’s Claire Phelps (Jim’s wife, and the only other surviving member of the team,) Luther (Ving Rhames, in a role he returns to for every film in the series,) and Krieger (Jean Reno, coming off of the Professional, making this movie the very next year.) The four of them pose as firemen, use a fire truck, set off a few alarms in the building (courtesy of Luther hacking away on his lap top,) and get inside.

Once inside the building, the heist part of the film begins. This is a fantastic sequence, including our characters crawling through air vents, dealing with lasers, and hanging upside down. That white room includes a  pressurized floor which calculates temperature and sound. There a some questions and problems with the scene. Would Krieger really be sneezing at free will in such a sound sensitive room? That’s when you catch the sneeze and stop it.  There’s also the issue of them saying the word “Toast” to such a volume that it nearly gets picked up by the sensors. I’m sure they know what they are doing with this, however, since it is a part of a test they are running. The spy equipment they use in this scene is incredible. I particularly like the device which goes under a bar, turns the screws that are holding a vent into place, until the pop out, and then catches them through magnets underneath of them.

The CIA headquarters scene takes its time to really show us how everything is working in close detail. This is something that most movies don’t do, and it’s exactly why the sequence is so great. From there, Ethan recovers the list and we find out who the villain is, only there’s just one problem. There’s still a whole lot of time left in this film. The movie shows us what Hunt has figured out, only after that it has him pretend like he hasn’t put it all together, and continues on, seemingly trusting everybody. It’s a little confusing until we find out later on, exactly what he was up to, and how he needed to find out if certain other people were in on it too. From here, we move to the train climax and it is truly fantastic. If you thought the bullet train sequence in The Wolverine was good, this one here blows it away. This scene feels more real than computerized, which is an amazing feat considering what is in play here. You can really see the wind moving Tom Cruise’s face and stretching it in all kinds of directions, for example. Between the shirt and the tie that get caught in the wind and blown off of his back, this scene also takes the time to consider the details.

The Mission Impossibe films have, for the most part, been a lot of fun. This first movie got it all started off right. To be fair, it is more of a mystey than an action movie. Hunt has very few, if any, fights in the film. The only real action scene is the bullet train climax. Other than that, there’s the party scene and tank scene, which both amount to nothing more than explosions. Still, as a smart mystery, this film works. Depalma is the perfect man for the job, finding ways to utilize his skill set as a director, without hindering the story (if only John Woo could have done that with this second movie.) The Mission Impossible films didn’t start to get great until the third movie, where they were able to get smart without being confusing. This first film was certainly smart, but it could have cut a few corners here and there in order to make the plot a little more accessible. The movie does have it’s flaws, here and there, but overall it is a very entertaining picture.