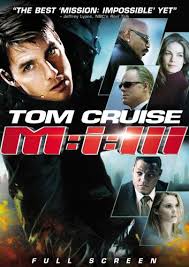 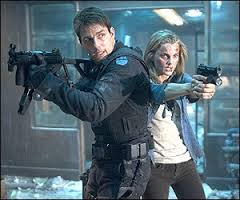 An excellent spy thriller, the smartest in the series, with as much focus on plot intricacies as there is on the action.

Mission Impossible 3 is really the first movie of the series that gets things right. Finally. The first mission impossible film was about big action set pieces and a plot that was way too confusing to follow. I’ve seen it a number of times now, and think I’ve kind of got it, but even still can’t be sure. The action scenes were memorable, (Tom cruise hanging from a wire in the all-white room, and the helicopter blowing up in the tunnel sending Cruise catapulting forward towards a moving train), but there were also only a small handful of those scenes held together by a terrible plot.

The second movie by contrast, was all about action and it wasn’t very believable action at all. That’s because they tapped Hong Kong action director John Woo to make the movie, a man known for his action choreography and not for his storylines. It was a gamble, putting him in charge of that movie, and boy did he screw it up. The plot was a lame take on the Hitchcock movie, Notorious, involving an ex-girlfriend of the criminal they were targeting and then an addition to the plot in the form of an air-borne virus. It was stupid stuff, and the movie was an absolute mess.

The third movie is hands down the best. It’s the directorial debut of J.J. Abrahms, the man was wrote and produced alias and lost, and it is the movie that the first two wish they could have been. It is smart and creative, but at the same time rather simple and easy to follow. Instead of making a whole complicated tapestry about what the IMF team’s mission is, it is a very basic mission, to retrieve something known as the rabbit’s foot. What is the rabbit’s foot exactly? We don’t know and neither do they. It’s just a McGuffin. a code word for something they need to retrieve. Simon Pegg, providing some of the comic relief in the movie, offers his guess in a little end-of-the-world monologue, but the truth is nobody has any idea. And that helps keep things much more grounded and on the level.

this movie by J.J Abrahms, one of the smartest guys working in Hollywood today, tries to correct. Everything the other mission impossible movies either did wrong or just never explained at all. so, for example, it shows the tom cruise character, ethan hunt, in a relationship with a woman he is engaged to. you can just see the thinking behind this, with abrahms saying, “he’s not james bond, a studly single secret agent, so let’s stop treating him like he is.” mission impossible 3 is the movie that finally fleshes out the ethan hunt character and gives him a life, instead of only a mission to complete.

the movie opens with a scene involving the villain, a ruthless phillip seymour hoffman, holding a gun to a tied up and gagged Julia, (michelle moynahan, playing the woman in hunt’s life). and ethan is right there, sitting across from it all, tied up, but able to speak. hoffman’s character, owen davian, is both menacing and evil, as he demands to know from ethan the whereabouts of the rabbit’s foot. the scene is one that we will come back to later on in the movie, but ends with davian shooting hunt’s wife. and now the movie begins. queue the recognizable franchise music.

as the storyline begins, hunt is currently out of the field, doing work from the home base by training other agents to be spies. and while hosting an engagement party for he and his fiance, hunt gets a call to come meet agent musgrove, (Billy crudup) at the local 7 eleven and retrieve some information. the situation is that lindsay (keri russell), a spy who was trained by hunt, has now been kidnapped by davian. hunt is being recruited to go in and rescue her. he was very close with lindsay, as she was the only spy he has so far recommended for approval. and he accepts the mission and joins with a team to go into the factory where she is being held.

the team that accompanies hunt consists of jonathan rhys meyers, maggie q, and the other chracter staple of these films besides hunt, himself, luther, played by ving rhames. i love that luther has been in all of these movies, and he’s never been better than he is here. for the first time, he has real conversations with hunt, questioning hunt’s getting married, telling him it’s not what people do in their field. i love that this movie not only gives rhames some real dialogue to work with, but also surrounds hunt with a group of talented actors to make up his team.

the factory scene is really the first big action set piece of the movie, and it is pretty impressive. hunt goes in, finds lindsay (the prize), and then takes out the enemies with her, side by side. there are gun fights, explosives, and a getaway situation that involves first riding on the roof of a truck, and then a helicopter chase through a field of giant wind mills. and this is just the beginning of the film.

as the movie goes on, not only do we continue to get great action scenes, but also wonderful plot points and ideas. this movie, for example, shows us exactly how one of those face replica masks is made as hunt impersonates davian to owen davian himself. there’s a clever vatican city sequence, followed by the blowing up and vehice assault on a bridge. but aside from the great action by and against davian and his men, there’s also trouble going on at home. hunt is suspected by imf intel officer laurence fishbourne, of being a traitor. and that gets him locked up by his own people. with all of this going on, it is somewhat excusable that when it comes time to get the rabbit’s foot, we are deprived of seeing exactly what happens inside the building. only how hunt finds a way to bust in and then pops back out claiming he’s got it. if there’s a flaw to this movie, that’s it right there. otherwise things move smoothly the whole way through.

and there is just so much that this movie does right. the cast is off the charts. from fishbourne and crudup to the entire imf team of ving rhames through simon pegg. and on the opposing side, davian is the first real bad guy of the series. dougary scott in the second film was forgettable, and john voight was hardly even in the first movie at all. but mission impossible 3 corrects every one of the franchise’s previous mistakes, starting with the villain (literally starting with him as the movie opens up with him). the action is fun and the plot strips things down to the bare bones and gets a lot more mileage and gritty intensity out of it as a result. it’s a pretty smart and exciting film.