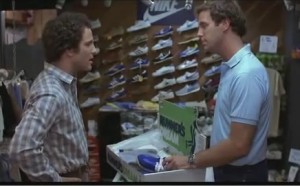 A very funny and truthful romantic comedy that captures the pains of breaking up and being paranoid of the person you’re with in great, humorous detail.

Albert Brooks is a very funny comedian. I haven’t seen a whole lot of his films, but everything I’ve seen him in has been great. He has a neurotic sort of persona just like Woody Allen, where he stresses out about things, but it’s not nervous rambling the way Allen does it. With Albert Brooks it’s more like asking a lot of questions and being very uncertain. Allen makes sly comments comparing things, whereas brooks are just unclear about the world. What they both have going for them is a sense that everyone around them is ridiculous and that they are the only ones that make sense in this world.

Brooks was great in the muse and broadcast news and lost in America. And I believe his best and most creative film is defending your life. Well, now I’ve seen modern romance, the movie of his that is probably most true to real life, and most about relationships. Nobody is doing anything drastic in this movie (in Lost In America, his wife blows all of their money at a casino, and in the muse, he hires a woman with a magical touch to help him write).

But modern romance is different. From the very opening scene at a diner, where Brooks’ character, Robert meets his girlfriend Mary for dinner and breaks up with her, you can tell that this is going to be a pretty realistic film. But not without tons of comedic situations, mostly that point out how bizarre real life can be.

Robert leaves the diner and goes to see his friend, jay, (Bruno Kirby), at the studio office where they edit movies together. Robert tells of the breakup and jay supports him, gives him some Quaaludes, and then sends him home. And once he gets home, Robert loses it.

This is where the movie starts to get very funny. Robert just can’t figure out what to do. Mary is the only thing on his mind, and he can’t get away from that, no matter how much he wants to or tries to convince him that he wants to. He plays music, talks to his bird, calls jay a few times, takes the Quaaludes, and even calls a woman in his rolodex for a date. This whole long scene is very funny, and shows just how nervous and chaotic the character is.

Robert shows up the next night to take the girl out that he called up and it’s a very awkward and hilarious scene, as he doesn’t even remember what she looks like. He drives her around the block, realizes he doesn’t want to go out with her, and brings her back home. And what makes it so funny is that he gives her no explanation at all. He doesn’t even stop driving at some point and say, “I can’t do this.” that’s because this movie is completely out for laughs and knows that anything like that will give it more of a drama or serious feel. So instead, Robert drives her around the block, drives her back, and kicks her out without any explanation at all. And it’s all about her reaction and what she’s thinking as she gets out of the car and walks back to her apartment.

As the movie goes on, Robert finds himself meeting up with Mary again and constantly suspecting her of things. To win her back, he has to go to a store and try to find exactly what he’s looking for, which is really something he made up. We’ve all had that before, where we think of something that would be perfect, and say “well, it’s got to exist,” and try to find it, but of course no such item does exist at all. In Robert’s case, he’s looking for a doll that says “Mary” when you pull the string, or else a doll that says “sorry.” he ends up with a stuffed animal giraffe.

Aside from the romance, the plot of this film also dives into Robert’s career as he and jay edit one movie and seem to constantly run into problems from the films director (James L Brooks). James L Brooks starred here in this film directed by Albert brooks, and years later, Albert brooks returned the favor, starring in broadcast news for James L. Brooks. But here, a James L. Brooks, which really is a director, gets to play a director, and to kind of spoof the job.

There’s a scene where Robert and jay completely reedit something, taking out a whole shot and line or two of dialogue. And it makes sense to them, and they can justify it and explain the reasons for it, but the director just doesn’t care. They go through a whole long speech about why this is the right decision and James L. Brooks listens to it and in the end agrees with them, but then tells them to put the scene back in anyway. In other words he didn’t really agree with them and just wanted to shut them up.

And then there’s another scene where Robert and jay have to create a running sound and end up chasing each other around like monkeys in front of sound editors who sit there watching how ridiculous they look. Modern romance is filled with moments like this. It’s either Robert being paranoid or neurotic about his relationship with Mary or else Robert finding stressful situations to deal with at work. The movie captures it all brilliantly. Like woody Allen, Albert Brooks not only stars in but also directs most of his movies. And they always seem to come out great. He is a very smart filmmaker and actor who really understand both comedy and timing. Modern Romance is another great one to add to his list.