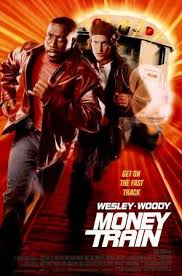 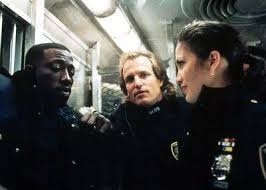 Despite its kind of dopey story, the action here is pretty cool and the movie is still a lot of fun

Hardly the smartest movie around, money train is entertaining and enjoyable none-the-less. The plot about two police officers that work the subway platforms is the same situation transported into a new location. Instead of being security guards robbing the store they work in or a bank employee robbing the bank, these guys aim to take down the money train that runs through their tunnels. One thing cool about the movie is that the money train heist idea doesn’t really come up until more than halfway into the film. The first half is too busy establishing characters, like their new partner (Jennifer Lopez in her breakthrough role), villains (a killer named the torch, played by Chris Cooper, and an evil boss, played by Robert Blake,) and problems (Charlie owes a huge sum of money to a bookie.) there’s a lot of conflict in this movie and the money train situation is really just the climax. The action is what propels this movie along, and in a b movie, guilty pleasure kind of way, Money Train isn’t all that bad.

Money Train is without doubt a dumb, but fun action movie. I put it in the same league as The Rock and The Long Kiss Goodnight. These were the nineties movies that used to be very entertaining, from a cool stunts perspective, but in terms of plot, they don’t quite hold up. The stories are just too paper thin, and the dialogue too simple. The action is still entertaining and the humor is still there, but the movies are just not smart enough. There aren’t enough twists and angles, as compared with movies of today. Money Train, like those other two action movies, takes us back to a simpler time.

The movie is about two brothers who grew up in an orphanage together. One of them is white and the other is black, and that’s pretty much the running punch line of the first half of the film. How are these two guys brothers when they are from different races? Luckily the movie has more going on than that. The boys are Charlie (Woody Harrelson) and John (Wesley Snipes). These guys have been together in movies before, from Wildcats to White Men Can’t Jump. Here they are playing guys who have known each other their whole lives, and are not only brothers, but also best friends, and also partners.

The guys are both cops. They work for the new York transit system and patrol the subways. The first time we see them in action, they are chasing down some low level teenagers who end up pick pocketing Charlie. He and John have a whole routine where one of them pretends to be drunk on the platform while the other one hides behind a wall in the distance, watching through a whole in the wall and using a pair of binoculars.

The scene ends with our two heroes having a run in with some money train cops who put the train above anything and everyone else. In this case, they see the kid running towards them and they shoot him down. They kill the kid. This is representative of the big boss villain, Patterson, played by Robert Blake. Patterson is the man in charge of the money train. I loves it like it was his baby and even has a little model of it on his desk that he shows off to Charlie and John. That is, before Charlie swipes it.

After a fight between Charlie and John and those money train cops, and then a meeting with the big boss, Patterson, himself, it’s time for the movie to get into its first real plots. There are two new developments now. One is a guy called the torch, played by Chris Cooper. This guy shows up at token booths and pumps gasoline into it, covering the transit worker. Then he throws a match inside and runs away as the worker burns. Charlie and John are on this guy’s case.

Aside from the torch, the other new development is that they get a new partner, played by Jennifer Lopez. This is Lopez’s first real movie, and I’ll always remember her from this film. She got pretty big just two years later or so when Anaconda and Selena and U-Turn all came out in the same year. That was 1997, a good year for movies (L.A. Confidential, Good Will Hunting, Boogie Nights), and a good year for Jennifer Lopez. Money Train came from the B movie years that proceeded 1997. Those years were 1995 and 1996 when every movie on the block wanted to be the next pulp fiction.

Aside from their problems with the big boss of the system, Patterson, Charlie Also has some major gambling problems. He owes a loan shark a huge sum of money and there’s no way he can pay it off. When he finally does get the right amount from his brother, Charlie has a funny run in with a character on the subway of all places. Suddenly he’s back to where he started. Things get really bad for Charlie and he ends up losing his job. Between being broke, not having a job, and needing to pay off his debt, Charlie seems to think he is left with only one decision. To rob the money train.

Earlier in the film, the boys rode on the money train with those special cops, who were told that they had to take on extra police during the holiday season. The money train carries all of the money that the subway system has accumulated during that week. While on this train ride, Charlie takes a lot of notes. He notices how much money is in each bag and where the train stops. He notices how the train passes right by the central park subway station and that there is a metal grating on the floor of the train.

The final third or so of the film becomes about the robbery. This is where the action goes from good to great. Leading up to this, the best action we really got was John jumping onto the tracks, right before a train comes, at the beginning. Either that or the scene where he shows up at the strip club where the loan shark works and beats up everyone in sight. It is a ridiculous scene, but at least it takes more than one hit and some decent fighting to bring each guy down. The train robbery, however, is where things get good.

We get John riding a motorcycle down the subway stairs and onto the platform, and then all kinds of madness once the boys actually board the train. The way things end up not going according to plan, and then them having to come up with something new, is all pretty cool. The movie ends up being exactly what it looked like. Dopey fun. It’s the perfect breakout role for Lopez, and kind of like a passing of the torch between those old day action stars and the new girl on the street. This movie definitely represents a time when films didn’t have to be smart, but certainly had to include good action, to be worth watching. Money Train wins no points for intelligence, but it is still a lot of fun.