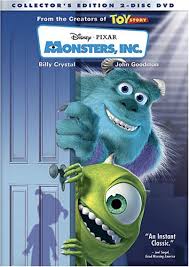 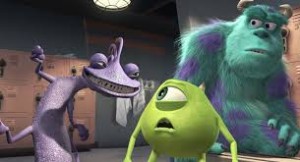 A fantastically creative pixar film with tons of well-thought out jokes and an intriguing conspiracy storyline.

Monsters Inc is a truly clever film that explores the depths of the imagination starting with the simple premise that monsters really are hiding in the closet. From there we get the notion that these monsters are not evil, but are actually just regular guys doing a job. Their job is to scare kids in order to collect screams which power their city like oil and electricity. the world of these monsters is filled with humor, but the story is what makes the movie extra special, with a little girl getting stuck in the monster world, and our two main characters, Mike and Sully having to take care of her. As if that wasn’t enough, there’s a mystery and conspiracy plot going on that our characters unknowingly get mixed up with. This is a very smart and entertaining movie, filled with the usual pixar humor where there are lots of jokes that you only notice when you watch the movie againa and again. Monsters inc is a movie that is easily worth multiple viewings. it is just that good and creative.

Monster’s Inc. is one the best Pixar movies ever. That’s high praise considering that pretty much every Pixar movie is good. So the only question then is how good? in the case of monsters inc, the answer is very. It’s up there with toy story and the incredibles, and probably comes in at that exact spot in order. Toy Story is the best, then monsters, and then The Incredibles. After that comes the second tier of movies including Ratatouille, Up, Finding Nemo, and films like that. But like toy story, Monsters is in a world of it’s own. This is a world of the imagination. Unlike Nemo or Ratatouille, which were just about animals living in the real world, monsters has to create a whole landscape, and that’s the first reason why it’s so good.

Toy Story was based on a single one liner concept. What if your toys, that you thought were just sitting in your room when you were gone, actually had lives of their own? What if they came to life and played with each other and had adventures? similary, monster’s inc is based on one of those what if concepts. what if there really were monsters in your closet who were trying to scare you while you were sleeping at night? And what if these monsters weren’t really bad guys, and it was just their job? that simple concept is what launched the movie.

the film opens with an example of this situation. a little boy says goodnight to his mom and goes to bed. he lies down, closes his eyes, and falls asleep. suddenly the bright eyes of a monster light up underneath his bed. the monster’s shadow looms over him, ready to strike. the monster roars and snarls and the boy wakes up screaming. only now the monster trips on about a dozen toys, and suddenly the scene becomes comedic. the monster stumbles and bumbles his way around the room, with balls bouncing off the wall and hitting the monster in the head. the scene has become slapstick, and suddenly lights turn on to reveal that the whole thing was a similation and part of a training program.

director james p. waternose (james coburn), playing a six legged, six eyes hideous creature in a suit crawls up to explain the monster’s mistake and also why they need to make the kids scream. the monster’s mistake is that he left the door open. that means that a child could have walked through that closet door and gotten into the monster world. and the screams are what power the city. they collect screams in cans as if they are liquid fuel, and all of the electricity is run by the power of these screams. waternose goes on to say that they need better scarers. they need scarers like sully.

that’s when we cut to a big fat furry blue monster in bed snoozing away. this is sully (voiced by john goodman.) we hear what sounds like an alarm clock announcing the daily news, only it’s not an alarm clock. it’s sully’s best friend, mike wasowski (billy crystal), a little green sphere of a character with only one eye. mike and sully now begin their day with a workout routine and training exercises. mike runs sully through the gammit and it’s all a lot of fun, but the plot really starts to move forward when we see a comercial on tv about how scarers get the screams and about how the screams power the city.

now our setup is almost complete. we are starting to get an idea of how all this works. it’s time to see it in action. mike and sully walk to work instead of driving because of a power shortage issue, where the monsters are just not getting enough screams. the walk provides us with the opportunity to see all kinds of cool monsters and funny situations. and when they get to work, we meet randall, (steve buscemi), the purple reptile-like competition to mike and sully. we also see sully compete against randal, go through one door after another, and get as many screams as they can. in one great moment, randal thinks he just past sully’s record and then mike emerges from his door with one canister aftr another, sounding a ring. sully walks out and says, “slumber party.” great line.

the problem really starts to happen about thirty minutes into the film. sully has to go back onto the scare floor one night to retrieve some paperwork that mike forgot to file. mike has to take his girlfriend out for her birthday dinner and get to the restaurant on time, or else he will lose the reservation. so sully goes back to the floor to help his buddy out, and he sees a door that is just sitting there. sully opens the door to find a little girl who pops out of it, and into the monster world. sully tries to put her back into her bedroom, but the little girl keeps getting through the door, and soon finds herself getting into the locker room.

sully goes to get mike and together the two of them start taking care of this kid. sully affectionately names her boo, but all the two of them really want is to send her back home. in pursuing that, they end up discovering that randal is up to some no good, mischievous plan. he was the one who left the door on the scare floor, and for some reason he is trying to capture boo. this is where the mystery starts to begin. why does randal want boo? what’s he up to?

if the first half of the movie is about the setup of the monster world and the problem, then the second half is about the villains and the mystery. there’s a conspiracy going on here with corruption and characters with hidden agendas. sully starts to care for boo while hiding her and trying to get her back home, and at one point, he and mike even have their friendship tested over it. mike wants sully to forget about boo, only sully can’t do that. he can’t just turn her over to randal. and its sully’s naive trusting of others that ends up getting the two of them banished to the himalayas.

aside from a really clever story, the exciting scenes of this movie also go a long way. the second half is filled with these elborate action scenes, such as sully riding a sled down the mountains of the himalayas, or duking it out with randal as he continues to turn invisible, or a chase sequence that involves handing on moving doors as they are pulled on a wire through a factory. this certainly beats the usual car chase sequence. the first half of the film is more about the laughs and setup, and both are handled nicely. this is a very funny movie, and billy crystal, more than anyone else, adds a real spark to the humor level. there’s one moment i don’t love, where the movie doesn’t really show how they both got out of the himalayas, but other than that tiny hiccup of a problem, this is an excellent film with creativity to spare.