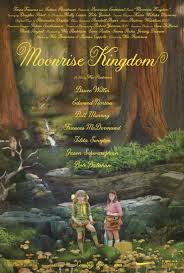 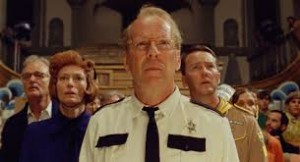 A very creative and witty movie filled with interesting characters and moments.

An incredibly artistic and lively movie loaded up with great humor and creativity. This is director Wes Anderson back in top form. The story is about two run away kids who have all the maturity and survival skills to keep them on the move for a lengthy amount of time, but none of the realistic goals. Their story is wildly fun, but so is the story of the different characters that are after them. There is a band of adults, spearheaded by the incompetence of Edward Norton and Bruce Willis. And then there is a whole set of khaki scout kids (like boy scouts), who are also chasing down the runaways. The movie delivers on all cylinders here, including dynamite colors, music, and little inventions of the kids. The experience of seeing these kids act like adults is what really makes the film work, and the humor about how ridiculous the circumstances are, ends up being the top priority of every scene.

Moonrise Kingdom is the best Wes Anderson movie in years. It’s a movie that finds the perfect balance of humor, music, and artistic creativity. On top of all that, it also has an interesting story, which puts together two kids on a mission and a whole group of adults in search of tracking them down. It is a fun movie, loaded with cute and clever ideas and for director Anderson, it’s a return to form.

Anderson has always been a witty and artistic filmmaker, and really broke out with movies like Bottle Rocket and Rushmore. He followed those with The Royal Tennenbaums, before hitting a downslide, which is pretty much where he spent the last ten years. Tennenbaums was in 2001, and he followed that movie with his three worst films to date… The Life Aquatic, The Darjeeling Limited, and the CG animated movie, The Fantastic Mr. Fox. These were all mediocre movies. None of them was terrible, but they also weren’t up to the same standards as Anderson’s previous films. Moonrise Kingdom is the first movie since Tennenbaums that most definitely is.

The two leads of the movie are young, about 13 years old or so, and they sneak off and run away from their homes. The girl, Suzy, runs away from her house and family. The boy, Sam, runs away from his boy scouts troop (called khaki scouts.) Sam is both mature and well trained in survival skills. Anderson’s best movie, Rushmore, also featured a kid who acted much older than he looked and had a certain intelligence and understanding of the world that most adults don’t have. Moonrise Kingdom has the exact same thing going on. Sam has tremendous ambition and finds clever solutions to his problems, even if he isn’t always the most realistic about things.

The problem with his plan is that he doesn’t really have an end goal. He knows that he wants to be with Suzy and that he can survive with her out in the wilderness for a while. But what then? And while he might have the skills of survival down pat, the practically of these skills in the real world makes them not as useful as he might think. Some of the funniest moments involve Sam sharing techniques with Suzy and Suzy finding backhanded ways to point out how ridiculous they are.

When same puts leaves on his head to cool him off, for example, Suzy agrees that this might work, but reminds him that he also might be cooler if he wasn’t wearing a fur cap. And when Sam throws up sticks in the air to see which way the wind is blowing, and they all just fall right back down, Suzy asks him what he found out. Sam just tells her they don’t need to use that technique after all. It’s fun watching a kid who thinks he knows everything, and then realizing that there are still things he hasn’t thought of yet. Another example involves sucking on pebbles to get water, only for Sam to remember that he has a bottle of water sitting in his bag.

The big problem, of course, is that Sam and Suzy are on the run with no place to go. It would be one thing if they planned on just running away for a week or a weekend to have a nice little vacation with each other. But these two plan to get married and spend the rest of their lives together yet have no financial means whatsoever. In one great moment, Bill Murray, who plays Suzy’s father, comes running at Sam and Suzy’s tent. Sam quickly zips the tent up so that Bill Murray can’t get in, and Murray just lifts the whole tent up, above his head. This gesture is so symbolic of the main point of the film. Sam might be witty and clever, but when it comes to the basics, there is actually a lot that he has missed.

The adults actors in this movie are all pretty great. It’s not that any one character stands out, (except for maybe Edward Norton as the khaki scout leader who loses one of his members,) but they are all on top of their game here. These are some of the best working actors around and they have fun with their parts. Aside from Norton and Murray, there is also Frances McDermond, Bruce Willis, Tilda Swinton, and Harvey Keitel. McDermond and Murray are Suzy’s parents, and Willis plays Captain Sharp, the head of the Island Police Department on Nantucket, where the movie takes place. He often seems to be the only policeman out there, doing a job that usually just entails him fishing while waiting for the phone to ring.

What makes this movie so great is that the children actors are given lots of screen time, and really bring the story alive with their wacky ideas. They fashion all kinds of plans with their survival skills, and in many scenes, we know we are watching kids, but we feel like we could be watching adults in another film. These kids take themselves so seriously, so it’s incredibly funny. It’s not just Sam and Suzy, as the kid roles in this film, but there are also the smaller roles, such as Suzy’s three younger brothers, or the other khaki scout kids. Those kids are a fantastic as they see Sam’s escape as an opportunity to hunt down a fugitive. When they go out into the woods armed with weapons that they have made themselves, it is a hilarious sight. The same goes for them taking canoes across a lake at night, and sitting around a table playing cards in a treehouse one evening, (based on their outfits, and the actions in the scene, these kids look like they could be soldiers in Vietnam, a sort of tribute to Rushmore, which featured kid actors playing Vietnam soldiers in the play at the end of the film.)

This movie, like all of Anderson’s films, is extremely artistic. The bright colors and music are all just right, and the camera shots are specifically designed to evoke humor in the way they move around. The movie opens, for example, with lots of different shots of things going on inside Suzy’s house, with the camera moving around from one room to the next. Sometimes it floats up from one floor to another, other times it pans down the hallway, and still other times it zooms out from one room to the next. And all of this plays to the sounds of some pretty creative music. That opening sequence is meant to show Suzy looking through binoculars, out the window, at all times, while her family members do various types of activities around her. Part of the humor is in the way that nobody seems to notice her or ever ask what she’s looking at. We find out though, pretty quickly, that she is just waiting for the mailman to deliver the letter from Sam that tells her when and where to meet him.

Moonrise Kingdom is one of Anderson’s best films because it combines all of the elements that this director has had the most success with in the past. Most of his movies involve an immature adult who comes up with all sorts of ridiculous ideas and ways to fool people. Whether it is Owen Wilson’s character in Bottle Rocket or Gene ackman’s in Tennenbaums, this tends to be Anderson’s favorite story to tell. In Moonrise Kingdom, just like in Rushmore, it is not an adult, but a kid, who takes on that starring role. I love the way this movie really has only two acts and even has one of the characters declare, “part two,” while she is reading a book. The second act is vastly different from the first, as far as what happens in the story, and yet it manages to be equally funny and entertaining. In fact, one thing that makes this story fantastic is that you have no idea where the second act is gonna go. Another movie would have made the entire film about the two kids on the run, with them only getting caught at the end, (think Thelma and Louise, A Perfect World, etc.) Moonrise Kingdom has their journey together end at the halfway point, leaving us with half the movie still to come and no idea what might be coming next. Moonrise Kingdom is a charming and witty movie and for Anderson, it shows he still has the ability to make a fantastic film.