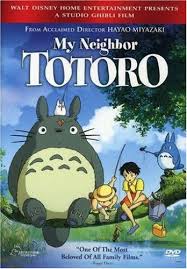 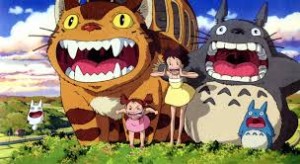 A cute movie that is unfortunately too light and carefree about it’s simple story.

My Neighbor Totoro is a movie by acclaimed anime filmmaker Hayao Miyazaki. This guy is the master of current anime films and has been for the last two decades. During that span of time, he’s made all sorts of films. Totoro is very different than his others. It is in every way the exact opposite of something like Princess Mononoke (my favorite of his films), because among other things, it is in no way violent at all. There are no spirits or gods in this movie. It is simply about kids and the creatures they meet at their new home.

The movie follows two girls who move to a home in the open country with their father. The girls are Satsuki and Mei. They are both young and in school. Mei is probably only about five years old, give or take. When they arrive at their new home, they go exploring the inside, checking out different rooms, doing all the usual things that kids would do.

The girls are playful and excited. Their mother is in the hospital and so it is just they and their father, and he tries to do the best he can with them. One day, for example, he takes them out on a bike ride. The girls meet an old woman who lives nearby and also a boy who is just a little older than Satsuki, who lived next door. He seems quiet and afraid, as if they have moved into a haunted house or something.

It seems to take at least half of the movie for anything to really happen. That might be an exaggeration, but it certainly feels like a while. It’s just two girls having fun, running around, and playing in the open space in the country. I would have preferred if the movie showed them in school a little. Just something to give us more characters and situations. Watching them hang out around the house gets kind of tiresome.

Then one day, Mei sees two little creatures walking around outside. They are both small, but one is bigger than the other one. She follows them into the bushes and then sees a small tunnel that is so low she practically has to crawl through it. The tunnel goes through the shrubbery and leads her to an open clearing where a much bigger creature is resting. This is Totoro.

Totoro looks like a cross between a rabbit and a fat cat, and he lies on his back trying to sleep. Mei tries to wake him, lying on his chest, but she doesn’t get very far. He just continues to snore with a large opened mouth. Satsuki goes looking for Mei and finds her under the bushes, fast asleep, all by herself. Mei tells her and the father about the Totoro, which means troll, and both of them want to believe her, but neither one is really sure.

Then one day it starts raining pretty hard when the girl are out and walking home from school. They pull out an umbrella and the boy who lives next door comes by and gives them another umbrella to take along. The girls come across Totoro. And offer him one of their umbrellas. Then a cat bus (a bus that is literally made out of a cat) comes by and picks Totoro up. He goes off on his way.

The problem with all of this is that none of it is very exciting. It takes a while to even see Totoro, and then when we finally do, it’s nothing special. Then it takes a while for us to get to the cat bus. The cat bus is cool looking (I love the head light eyes), but it doesn’t really contribute to the plot at all. And the plot is very simple and very weak.

By the final portion of the movie, a problem finally emerges. Mei disappears. Nobody knows where she is, and Satsuki must go out and find her. She gets help from Totoro and the cat bus and that’s about it. So finally we get a bit of a plot, but it’s nothing special and is easily solved.

My Neighbor Totoro is cute and silly, but it is not very exciting at all. The plot is way too simple and nothing great really happens. I suppose the cat bus is the highlight of the movie, but it is just one cool animation idea from a filmmaker who usually loads his movies up with things like this. The plot is lacking here, and I get that this is more of a movie for children, but that’s hardly an excuse. The great Disney movies of the nineties (The Little Mermaid, Beauty And The Beast, Aladdin, The Lion King) were movies for children too, and those were loaded with plot ideas. The animation is good in Totoro, but the ideas are certainly lacking.