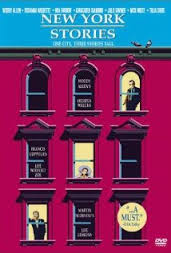 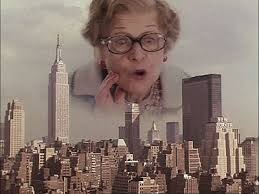 An interesting short story movie where two of the stories are fun and one is incredibly lousy.

New York Stories is a movie of three short stories by three different filmmakers. In addition, they are all incredibly talented filmmakers too, although two of them are arguably much better than the third. Those two filmmakers are martin Scorcese and Woody Allen, and they are two of the best in the business. Scorcese is the defining director of gangster movies, and Allen is a wonderful comedic mastermind. Aside from that, they are both major New York City directors. There are three directors in Hollywood who make almost all of their movies in New York City, and these guys are two of them. The third one is spike lee. It would have been amazing if this movie got him as the third director. However, it did not.

It got Francis Ford Coppola instead. Now Coppola has had some wonderful movies under his belt. Well, three of them. The two godfather movies, of course, and then apocalypse now. However, I still do not think he is great. For one thing, he has not done anything very good since then, and apocalypse now was in the late seventies. Aside from that, the story of his career seems to be about being in the right place at the right time. The Godfather was going to be made no matter what and it was going to be great no matter what. They gave Francis the directing gig because he had an Italian name. Then they through an all-star cast at him, and a powerhouse of a script based on a terrific book. With Marlon Brando and Al Pacino cast in the roles that they had, it would have been hard to screw that movie up.

The same can be said of Deniro in the second movie, and as far as apocalypse now goes, it is not very great. It has cool visuals and interesting scenes at times, sure, but overall it is often slow moving and very long. So I have a bone to pick with Francis, and in New York Stories, his story is the only one of the three that is just not interesting at all. It is about a little girl who befriends an Arabic boy who is the son of wealthy tycoons. Both kids are wealthy, actually, and they live in big buildings on central park west. The little girl is told a story about some special jewelry and then realizes that he new friend can help her return the jewelry to the rightful owner. This kind of storyline is kid’s stuff. There is no real risk here, or anything to keep us interested.

Luckily, the other two stories are much better. The first one is by Scorsese and stars nick note as Lionel, an artist living in a loft in Tribecca. This guy spends all day painting and letting loose on the canvas. His style is in many ways like that of Jackson Pollack, although he is not just dripping drops of paint everywhere. Still, what he is doing is often very messy and hard to figure out what it is supposed to be. In addition, his story involves the relationship he has with a female student.

Rosanna Arquette plays Paulette. The former assistant who is now more like a student. She used to work for Lionel and then the two of them started up a relationship. Only she started feeling dirty, like he was a creepy older guy who was using her for sex. At one point, she probably thought that he liked her art and could help push her in the right direction of how to improve it. However, Lionel was never interested in that.

In this short film, Lionel starts out going to pick Paulette up from the airport. Only she wants nothing to do with him. She is done with him and with that part of her life. He convinces her that she can move in and have a bedroom of her own and can use his studio to paint. In addition, he tells her that she will not owe him anything. Therefore, the story of lust and jealousy begins. She often asks him what he thinks of her paintings and her style. She wants him to be honest with her about whether she has any skill or not. In addition, he never gives her an answer. The fact that he never tells her a thing about her work makes him even more of a jerk that is not willing to put any effort in.

As the story goes on, Lionel has issues with the men that Paulette sees and it builds and builds until she is forced to rid herself of him. That is when we get an ending that actually shows us how this whole relationship between Lionel and Paulette might have begun. It is a cool touch and a bit scary and creepy. Like one of those tales from the crypt, kind of endings where you want to warn characters of what they are getting themselves involved with. It is a dark short film and Scorcese does a nice job with it. He even has his signature move of repeating the same song repeatedly so that it is associated with this film.

The second story is the one by Coppola, and it is a mess. At that point, two stories are down and one was good while the other was terrible. The movie has certainly cooled off since Scorcese kicked it off with his film, but now it is time for one more movie and it is an important one, because the fate of the entire film depends on it. Since the vote is split 50 / 50, with one good movie and then a bad one, Woody Allen’s movie will be the determinant for whether or not new York stories ends up a good film.

In addition, the Woodman does not let us down. His movie is very funny. It is about a guy who has issues with his mother. She is constantly in his business, treating him like a child, and he’s about to get married. Woody Allen himself plays the main character, Sheldon. He is engaged to Lisa (Mia Farrow). Only Sheldon’s mom does not like her. In addition, one night when the three of them go to a magic show, the magician takes Sheldon’s mother on stage for a trick and loses her. He puts her in a box, makes her disappear, and then cannot figure out where she went. It is a wonderful premise, and it keeps going and going. Soon the mother is in the sky bothering everyone in sight with stories about Sheldon. It is very creative, but also the kind of movie that Allen would have never made as a feature film. As a short, however, it works great.

New York Stories have two good movies and one bad one. The good movies are not fantastic or anything, but they are enjoyable. Especially since, they have such different tones. In fact, all three of these movies are very different and for that I am thankful. Scorcese’s movie is dark and disturbing. then we come to Coppola’s piece of junk that is about children and imagination fantasies. Then we end with the comedy of woody Allen, and it is nice to have that light note waiting for us at the end of the film. The movie is overall good. I definitely liked two of three stories a lot. In many ways, this movie reminds me of the nineties, film four rooms, which were four stories by four different directors. With that movie, two of the rooms were great and the other two were somewhat lousy. If only they could all, be great. If only when making New York stories, the three directors could have offered each other some advice. Maybe then someone would have helped Coppola see that his story was just not as interesting as the others were. Aside from his film, the rest of the movie was good.